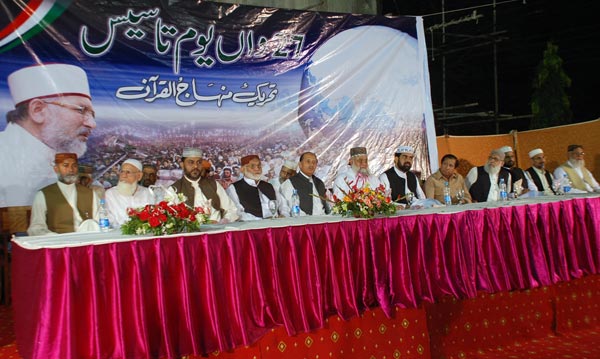 A ceremony that marked the 27th foundational day of Minhaj-ul-Quran International was held on the roof of the hall of Gosh-a-Durood in the central secretariat on October 17, 2008. Amir-e-Tehreek MQI, Sahibzada Miskin Faiz-ur-Rehman Durrani, presided over the programme, whereas Nazim-e-Ala Dr Raheeq Ahmad Abbasi, naib Amir Brig (r ) Iqbal Ahmad Khan, naib Nazim-e-Ala Sheikh Zahid Fayyaz, naib Nazim-e-Ala Sq. Leader (r ) Abdul Aziz, Secretary General PAT Anwar Akhtar Advocate, Principal of Farghana Institute of Manchester Allama Muhammad Ramzan Qadri, Nazim-e-Tanzeemat Sardar Mansoor Khan, Nazim DFA G.M. Malik, Amir-e-Punjab Ahmad Nawaz Anjum, Nazim Minhaj Welfare Foundation, Dr Shahid Mahmood, Sajid Mahmood Bhatti, MD Minhaj Education Society Shahid Lateef Qadri, the member of the first Shura of MQI Muhammad Aslam, Shameem Ahmad Numberdar, Sajid Hameed and other leaders were among the prominent guests at the occasion. The highlight of the programme was the special attendance of the members of the first executive of Tehreek in addition to the office holders of different forums of MQI from across the country. Women formed the half of entire participation for whom separate arrangements were in place. 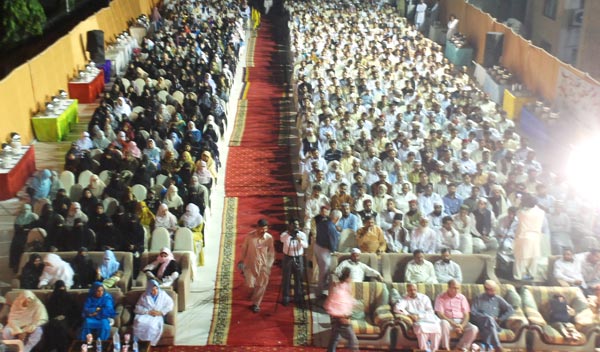 The proceedings of the programme got underway with the recitation from the Holy Quran at 9 pm followed by recital of Naat by Abdul Basit. Minhaj Naat Council presented Durood in its characteristic style and did ‘Naat Khawani’ with ‘duff’. Tehreeki anthem was also presented afterwards. Special short documentaries of the recently concluded Itikaf 2008 were also played by the Minhaj Productions. 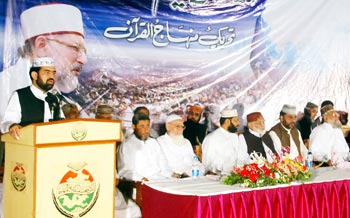 In his speech, Nazim-e-Ala Dr Raheeq Ahmad Abbasi congratulated the members, participants and associates of MQI on its 27th foundational day. He said it was matter of immense pleasure that MQI had completed 27 years of its life since its inception. MQI was spreading the message of peace and harmony throughout the world under the inspiring and dynamic leadership of Shaykh-ul-Islam Dr Muhammad Tahir-ul-Qadri. The caravan that embarked on arduous journey under the leadership of Shaykh-ul-Islam has come to be characterized as torch-bearer of global peace. “It is our resolve that we would continue our efforts for establishment of international peace. Shaykh-ul-Islam Dr Muhammad Tahir-ul-Qadri is our leader and spiritual mentor and we would change destiny of Pakistan under his leadership, he added.”

Naib Nazim-e-Ala Sheikh Zahid Fayyaz said in his talk that the accomplishments and achievements made by MQI in short span of 27 years owe themselves to Shaykh-ul-Islam Dr Muhammad Tahir-ul-Qadri. He said we were workers of this great organization and this day marked the revival of commitment. He said we should be thankful to Almighty for having chosen us for the service and welfare of humanity. 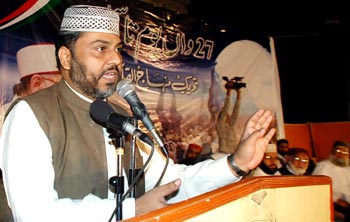 Representing the first central executive, member of first Shura of MQI, Muhammad Aslam, said that we should be sure of the fact that this Movement was based on truth and may Allah keep us committed with it. Citing from his life, he said that he was a worldly man in 1987 and is still a businessman and had no faith in the religious leaders. This was the time when Shaykh-ul-Islam used to give lectures on the Holy Quran in a Samanabad in his youth. He happened to listen to him at the invitation of a friend. Afterwards, he met Shaykh-ul-Islam who invited him to join MQI. He said that he tested him in different respects but he turned out to be true and perfect in every respect. He was the person by meeting whom his image and impression of the religious scholars underwent change and he became the servant of religion and stands firm to the same belief. He prayed to Allah Almighty to grant him courage to serve Minhaj-ul-Quran International. He said this was his message to the people on the foundational day. 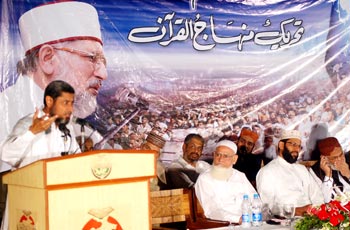 Shaykh-ul-Islam Dr Muhammad Tahir-ul-Qadri delivered telephonic address to the programme from abroad. Congratulating all the workers, members and affiliates of MQI, Shaykh-ul-Islam said that we should be proud of the fact that MQI had spread in more than hundred countries and seven continents of the world. The Islamic centres of MQI were busy enlightening people with light of knowledge. He said MQI was the only organization of the world which had organizational and administrative setup at such a mass-scale level. “It is not getting into hyperbole when we say that MQI is the only organization, which is rendering its services for the spread of peaceful message of Islam in the entire world, he added.” 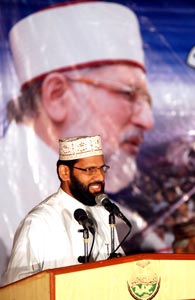 He said Minhaj-ul-Quran International was considered the torch-bearer of peace, human development and integration throughout the world. We should be thankful to Almighty for having granted us the capacity to spread the message of Islam in the entire world with modern means and tools. “This is the age when followers of Islam are lumped together with terrorists without any cause and justification but by grace of Allah Almighty, despite all this, the name of Minhaj-ul-Quran International is regarded as peaceful and enlightened organization, he added.” He said it was not merely a claim but was also corroborated by the facts on the ground because MQI had popularized the universal message of Islam from representation and rights of women to welfare to representation and rights of minorities. As a result of these things, MQI enjoys such distinction and honour as is exclusive to it without any other match. “This is the day when we revive our commitment and association with MQI that we would continue our journey with more zeal and zest than before and by grace of Allah, all of these efforts would be instrumental in removing confusion and misunderstandings about Islam, he concluded.” 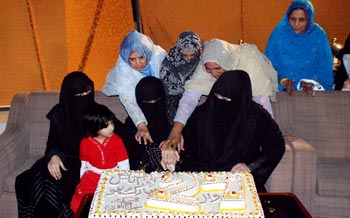 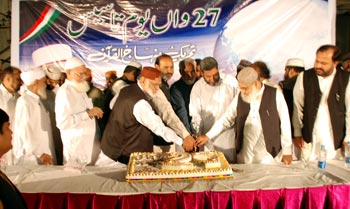 After the speech of Shaykh-ul-Islam, Amir-e-Tehreek Miskin Faiz-ur-Rehman Durrani also expressed her views at the occasion. MYL president, Bilal Mustafvi, conducted the proceedings of the programme. The programme ended on Dua followed by delicious dinner for the participants. 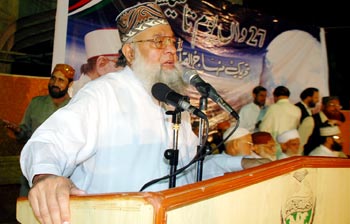 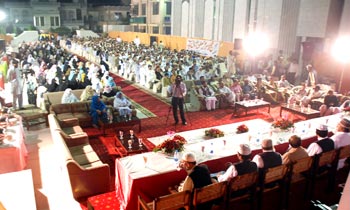 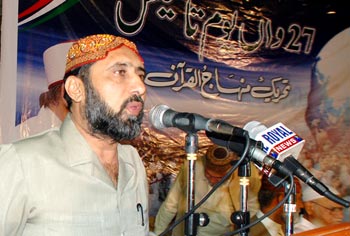 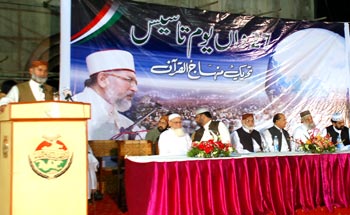 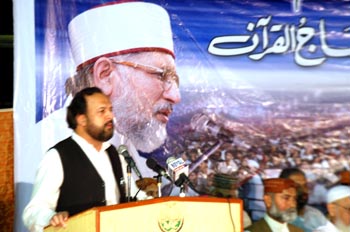 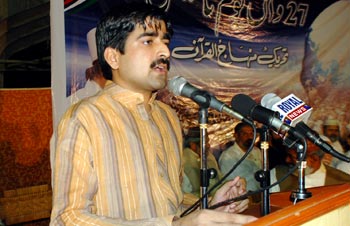 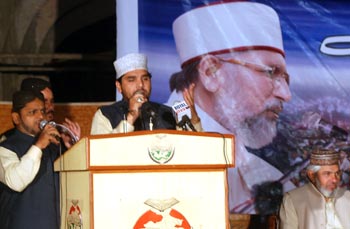 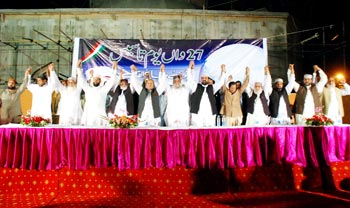 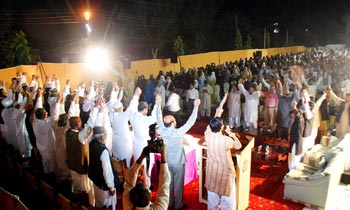 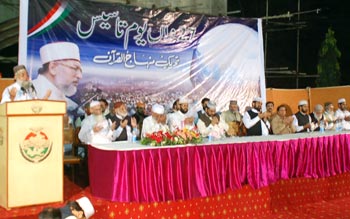 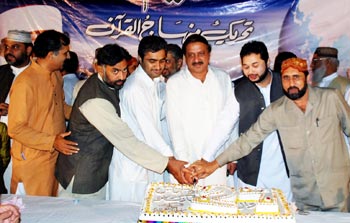 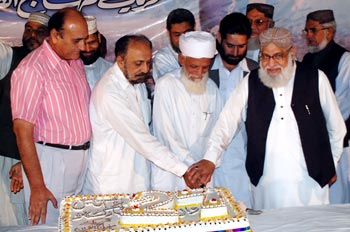 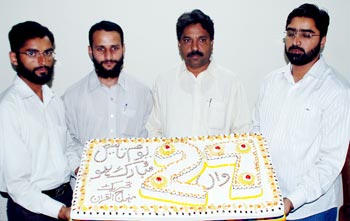