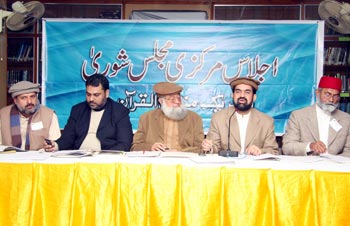 The joint session of Federal Council of Pakistan Awami Tehreek (PAT) and Majlis-e-Shura of Minhaj-ul-Quran International, which continued for two consecutive days, concluded on January 18, 2009. Addressing the joint session telephonically from Canada, Shaykh-ul-Islam Dr Muhammad Tahir-ul-Qadri said that the Muslim Umma was confronted with most difficult, perilous and trying times. The efforts needed to be geared for unity within the Umma at the international level and education should be declared as the topmost priority in the entire Muslim world. He said that there was acute need of diverting maximum resources for the spread of science and technology.

Dr Muhammad Tahir-ul-Qadri condemned the Israeli aggression in the strongest terms, regretting that 50 plus Muslim countries, OIC and the Arabl League could not play any role in containing Israel from carrying on with its massacre of the innocent Muslims including children and women. He urged the international community to prosecute Israel in the International Court of Justice for its war crimes in Ghaza and pressurise the Jewish state to withdraw its forces from the Palestinian city. 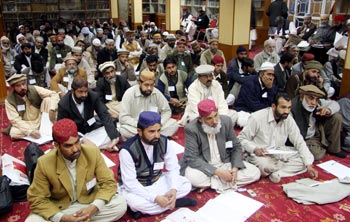 The joint session condemned Israeli barbarism in Palestine and adopted a number of resolutions with consensus. The first resolution related to condemnation of the passivity and inaction of OIC and the Arab League and the double standards displayed by the world powers and the United Nations. The joint session also decided to further accelerate the fund raising campaign for the rehabilitation of the affected Palestinian Muslims under the banner of Minhaj Welfare Foundation after the ceasefire takes effect in Ghaza. Shaykh-ul-Islam Dr Muhammad Tahir-ul-Qadri had already established a relief and rehabilitation fund with Rs. 10 million in this regard. The rich and affluent people were urged to donate generously for the cause of rehabilitation of the Palestinians.

Another resolution, while condemning India for its aggressive posturing, demanded of the government to resolve all issues in the FATA and Northern Areas through dialogue and not gun. The third resolution urged all religious and political parties especially the government and opposition to solve all problems like 17th Amendment, judicial crisis and rifts between provinces and federation through engagement and dialogue for greater national solidarity and integrity as this was no time for political point-scoring and realpolitik 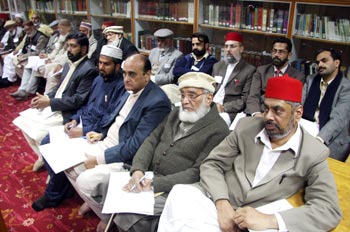 The fourth resolution asked the government to formulate short- and long-term plans in order to overcome such problem as power, energy and gas crises, food shortage, price hike and unemployment etc. The joint meeting also decided to step up 'contact campaign' with the masses up to the grassroots like the union council. About one million CDs of speeches of Shaykh-ul-Islam Dr Muhammad Tahir-ul-Qadri would be distributed among the people in this regard. After the establishment of sub-organizations of Tehreek at the level of unit and union, the provincial chapters of MQI would be reorganized.

The joint session also approved the plan to celebrate the birthday of Shaykh-ul-Islam at the international level. Seminars on topic of "Dr Tahir-ul-Qadri as an ambassador of global peace" would be held across the country and abroad to pay tribute to the services and contributions of Shaykh-ul-Islam for promotion of peace, tolerance, interfaith dialogue, and inter-sect harmony. The workers and associates of MQI would donate their blood for the poor patients on February 18. Donations and alms-giving would mark the beginning of the 19th of February, the birthday of Shaykh-ul-Islam Dr Muhammad Tahir-ul-Qadri. Special Mehfil-e-Zakkir and Naat would be arranged on the night. Minhaj-ul-Quran International would also hold 'All Pakistan Mashaikh Conference' on March 1, 2009 which Shaykh-ul-Islam Dr Muhammad Tahir-ul-Qadri will preside over himself. Religious scholars from across Pakistan will attend the conference in order to formulate collective plan of action for revival of spiritual values in the society. 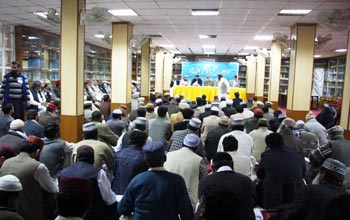 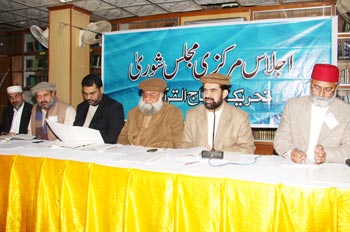 The joint session also decided to celebrate the birth anniversary of the Holy Prophet (saw) with grandeur at the international level in the holy month of Rabi-ul-Awal. Prominent religious personalities and heads of political and religious organizations would be invited to attend International Mawlid Conference to be held at the Minar-e-Pakistan this year.