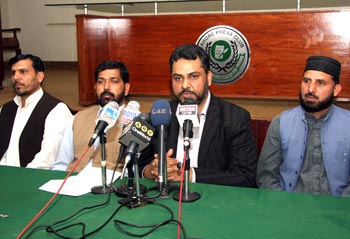 Naib Nazim-e-Ala of Minhaj-ul-Quran International, Sheikh Zahid Fayyaz, has said that hundreds of thousands of people would demonstrate their love for the Prophet of Islam (saw) by participating in the upcoming 25th International Mawlid-un-Nabi Conference to be held on the night of March 9, 2009, under the banner of Minhaj-ul-Quran International. The conference is all set to be attended by intellectuals, religious scholars of eminence and representatives of different organizations across the globe. 50 administrative committees have been put in place to finalise all arrangements. The chief highlight of the International Conference is the speech to be delivered by Shaykh-ul-Islam Dr Muhammad Tahir-ul-Qadri, whereas Sahibzada Hassan Mohi-ud-Din Qadri, president of MQI Supreme Council and Sahibzada Hussain Mohi-ud-Din Qadri, member of MQI Supreme Council, would also attend it.

Sheikh Zahid Fayyaz said that immoral activities in the garb of celebrating Basant would not be tolerated in this holy month of Rabi-ul-Awal. The government needs to formulate strict code of conduct to respect the sanctity of the month. He said the birthday of the Holy Prophet (saw) was drawing near and it was the month to accumulate as many blessings as possible. The Muslims should focus their attention on attainment of Allah’s Mercies. He expressed these views while addressing a press conference in the Lahore Press Club the other day. Sajid Bhatti, Shahzad Rasool Qadri, Ahmad Nawaz Anjum, Prof Zulifqar Ali and other leaders were also present at the occasion. 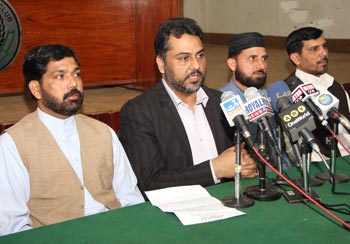 Sheikh Zahid Fayyaz said that Minhaj-ul-Quran International would continue to host Melaad Feasts and other religious programmes throughout the month. He said that love for the Holy Prophet (saw) was the be-all and end-all of life of believers and MQI had been struggling to spread this love since last 29 years. Hundreds of thousand of people gather at the ground of Minar-e-Pakistan in the International Mawlid Conference and strengthen their faith and association with the Prophet of Mankind (saw).

Sheikh Zahid said that more than 5000 workers of MQI would be deputed for security purpose in view of serious security situation in the country. The City administration had also promised to provide security in this regard. Renowned Naat-Khawans would recite Naats to pay tribute to the Holy Prophet (saw), whereas top religious scholars and spiritual personalities would also grace the stage. Hundreds of caravan from across the far-flung areas of Punjab would start reaching the venue from evening onward. He said that arrangement would be made to install modern digital screens on the adjoining roads to telecast the proceedings of Conference live to the people sitting far away from the main venue. He also said that a private TV channel would show the programme live throughout the world in addition to the live coverage of the Conference through MQI website.

Sheikh Zahid Fayyaz said that Durrod recited during last year in the Gosh-e-Durood would also be offered to the Holy Prophet (saw).