Secretary General of Pakistan People’s Party, Jahangir Bader, called on the Chairman of Pakistan Awmai Tehreek (PAT) Dr Muhammad Tahir-ul-Qadri at his residence yesterday. Nazim-e-Ala Dr Raheeq Ahmad Abbasi, Sheikh Zahid Fayyaz, Zahid Islam, Jawad Hamid and Sohail Raza were also present in the meeting. Speaking to the media after the meeting, Dr Muhammad Tahir-ul-Qadri said that he was ready to play his role for grand reconciliation if efforts being made for reconciliation could not bear fruit. He said that Pakistan was faced with serious crises at both internal and external fronts that had graver implications for the country if good sense did not prevail. He said that there were virtually no institutions in the country and experiment in democratic order was exposed to yet another failure. Terrorism was the order of the day. The present wrangling was not in the interest of the nation. He said that supremacy of parliament, independent judiciary and de-politicisation of executive could save the system from destruction. He urged the leaderships both PPP and PML-N to show flexibility in their respective positions for amicable and negotiated settlement of the controversial issues. He said greater responsibility lay at the shoulders of the government that it led from the front by creating space for dialogue and engagement. If the present confrontation continued, it would prove to be very lethal in the long-tem. He said regional and international powers wanted to turn Pakistan into Afghanistan and Somalia by exploiting our instability and internal power wrangling. Dr Muhammad Tahir-ul-Qadri said that in these circumstances those whom people voted out of power would take pride in saying that their tenure was better than the present one. Therefore, an end to the politics of confrontation was urgently needed for continuity of democratic process. He also asked media to recognize its role in this volatile and critical situation and help put the country back on track.

Talking at the occasion, PPP’s Secretary General, Jahangir Bader, said that both PPP and Pakistan Awami Tehreek had been coalition partners in the past and the purpose of the meeting was to strengthen mutual relationship of both parties. He said Shaheed Mohtarma Benazir Bhutto was life member of Minhaj-ul-Quran International and appreciated the services and contributions of MQI in social, welfare, educational and religious domains. The leadership of PPP holds Dr Tahir-ul-Qadri in high esteem. 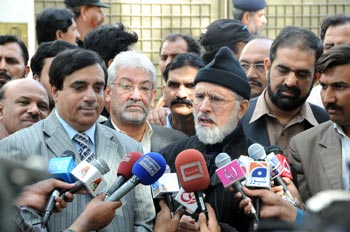