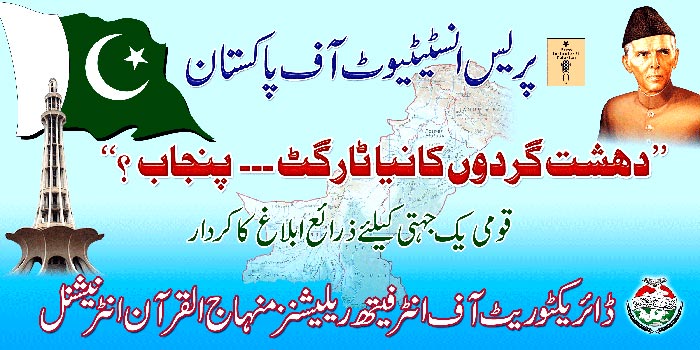 Directorate of Interfaith Relations; Minhaj-ul-Quran International and Press Institute of Pakistan jointly hosted a seminar to mark the Independence Day of the country. The topic of the seminar was “Punjab: a new target of terrorists and role of media in projection of national solidarity”. 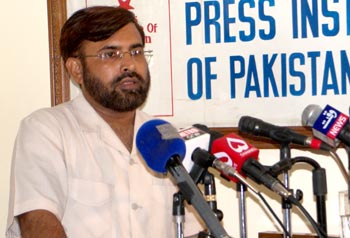 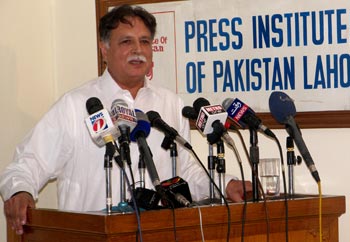 Senator Pervez Rashid, advisor to the Chief Minister of Punjab, presided over the seminar, whereas Prof Ata-ur-Rahman, renowned columnist and chairman of the Intercommunity relations, Superior University) was the guest of honour at the occasion. The seminar drew broad-based participation from the cross-section of community leaders and representatives of different faiths. The prominent among the speakers included Mr. Noushair F. Dastoor, (Zoroastrian community leader), Dr Manohar Chand (leader of the Hindu community), Revered Dr Majid Abel (Pastor In charge of Naulakha Presbyterian Church), Sardar Kalyan Singh (leader of the Gurunanak Mission of Pakistan), Sohail Ahmad Raza (director of interfaith relations, MQI) and Muhammad Jawad Hamid (director of Ijtima`at, MQI). 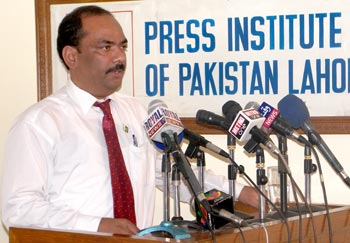 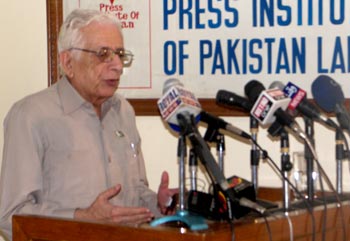 Muhammad Rafique Alam, the director of the Press Institute of Pakistan, who also conducted the proceedings of the seminar, threw light on the role of media in containing the terrorist wave, which is currently sweeping through the province of Punjab.

Sohail Ahmad Raza, director of Interfaith Relations of Minhaj-ul-Quran International, said in his talk that Pakistan was engulfed by the religious terrorism and there was need to expose those elements who were using the fair name of Islam to promote their sectarian agenda. He said MQI was playing its due role in the promotion of international peace, harmony and dialogue among different communities and religions under the dynamic leadership of Shaykh-ul-Islam Dr Muhammad Tahir-ul-Qadri. It is because of multifarious services of Shaykh-ul-Islam that he has been awarded the title of ‘Ambassador of Peace’. 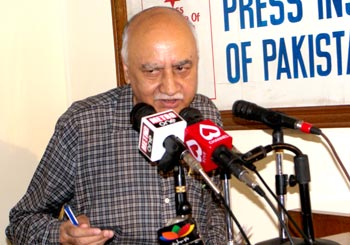 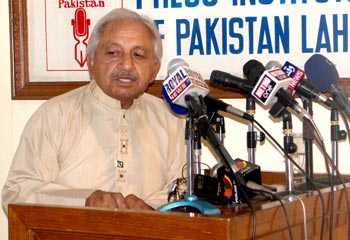 Regretting his deep sorrow and grief over the sad Gojra incident where precious human lives were lost, Sohail Ahmad Raza said that people belonging to all religions need to accelerate their efforts to forge a united front against terrorism and extremism. He said that MQI demanded of the government to apprehend the perpetrators of crimes in Gojra and bring them to justice.

Jawad Hamid said in his speech that the major factor responsible for the spread of terrorism and extremism in Punjab was lack of education and awareness. We would have to wage a collective struggle to eliminate ignorance. The country could get an able leadership through the evolution of educational system. 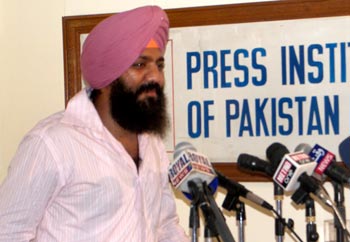 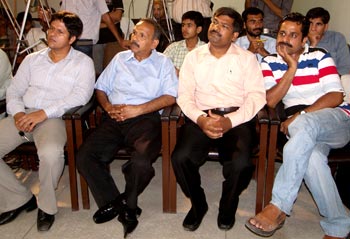 Mr. Noushair F. Dastoor said in his talk that the Quaid-e-Azam envisaged Pakistan to be a hub of peace and security for all of its citizens without any discrimination. Alas, we did not prove equal to the task and allowed the Quaid’s Pakistan to be held hostage by a handful of extremists. He emphasized the need of forging unity within our ranks by rising above our identities and religious identifications in the larger national cause of national integrity. He also applauded the role of MQI in building bridges and bringing communities together. 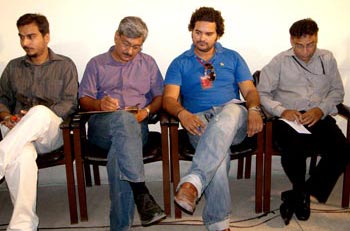 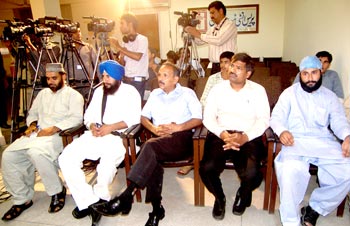 Sardar Kalyan Singh paid rich tribute to Shaykh-ul-Islam Dr Muhammad Tahir-ul-Qadri for his ideal and exemplary treatment of the minorities. He warned the participants of the rising terrorist dangers in Punjab and stressed the need of joint action.

Dr Manohar Chand referred to the speech of the Quaid-e-Azam to the first Constituent Assembly on August 11, 1947, whereby he had pronounced equality for all citizens of the new state without any reference to religion. He said that Dr Muhammad Tahir-ul-Qadri was promoting the same concept by bringing different communities closer. 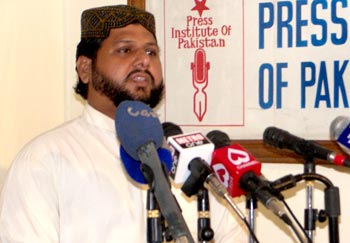 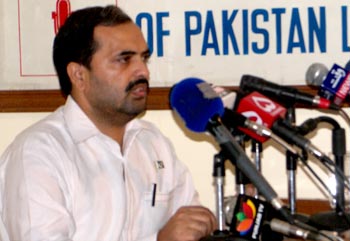 Revered Majid Abel also paid tribute to MQI for providing an opportunity to all participants to share their views. He said that the Gojra incident brought Pakistan into disrepute across the globe. A handful of extremist elements want to destroy the national cohesion by terrorizing the Christians but they would ultimately fail in their nefarious designs.

Prof Ata-ur-Rahman said that effort was afoot to play us against one another. The sowing of seeds of sectarianism and terrorism in Punjab had the potential to engulf the entire country. The creation of national unity could be the befitting answer to these conspiracies of the anti-Pakistan elements. 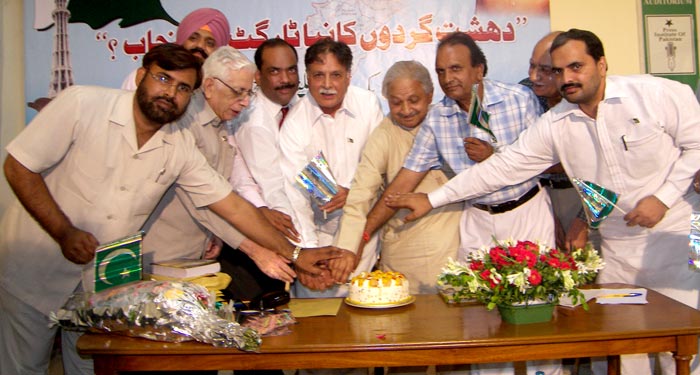 Senator Pervez Rashid said in his presidential address that the incidents like Gojra were happening due to ignorance of teachings of Islam. As long as there would be no rule of law and supremacy of constitution, we would continue to be dictated by the evil forces.

All participants cut the cake in connection with the Independence Day and prayed for national solidarity and progress. 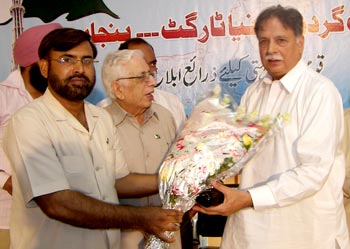 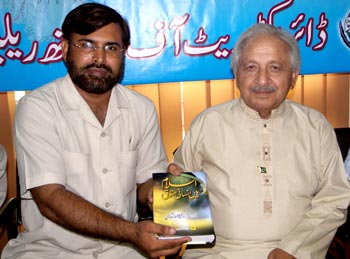 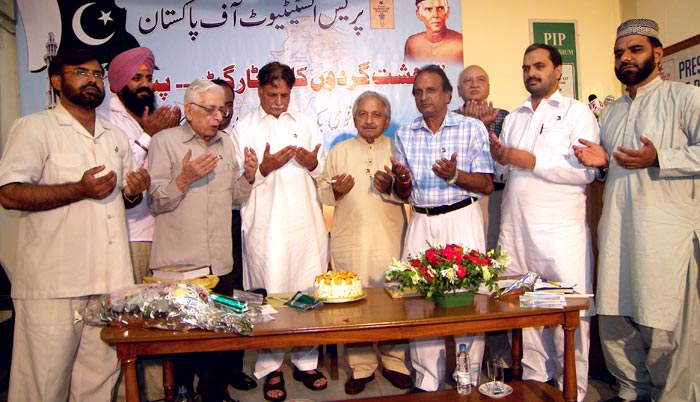