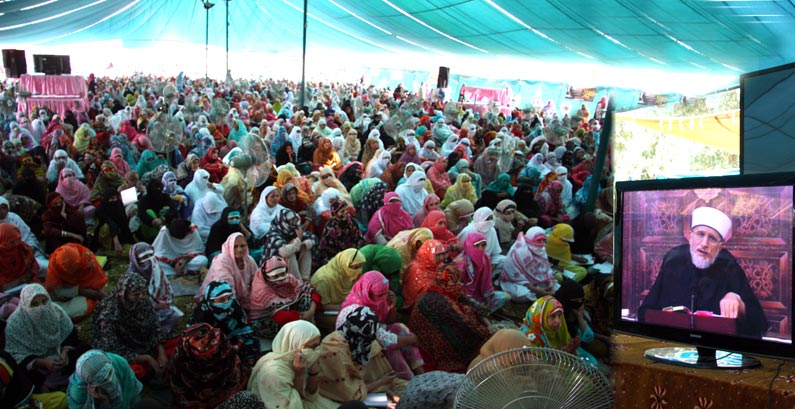 The daily schedual of Women Itikaf starts at Sahri. The Salat Committee was in action according to the schedule. They wakened up the ‘mu’tafikat’ for Tahajjud prayer. Announcements were made on public address system in this connection. Later, the Mess committee came to the fore and served Sahri to the participants. This was followed by Fajr prayer, Mahfil-e-Dhikr and Halqa-e-Durood. That created really a moving spiritual environment. After the Mahfil was over, the ‘mu’tafikat’ continued recitation of their respective devotion, wazaif, especially the recitation of the Holy Quran individually in their rooms. They took rest from 07.00 to 08.30 before they started preparing for Salat-u-Tasbih.

The special event of the day was lecture by Shaykh-ul-Islam Dr Muhammad Tahir-ul-Qadri. It started at 11.00 and ended before Zuhr prayer. He spoke on merit of excellence of strict control over the use of tongue. He developed his talk with the verses of the Holy Quran on the subject, explained and interpreted various Prophetic traditions in this regard and enlightened his audience the world over through internet on the sayings and the practices of the Companions, the Successors, the followers and saints in this connection. He gave a comparison of the organs Allah Most Wise has blessed us with around the face. We have two eyes, two ears, two nostrils but only one mouth and one tongue inside. The eyes have delicate eye lids to cover and protect while the ears are left open but tongue has been caged inside two fences: the fence of 32 teeth and the outer fence of two lips in view of the inherent dangers. If one of the fences is closed tongue is no more in use and we can speak. According to the teachings of Islam one must control tongue. He who succeeds in doing that is given the good news of deliverance here in the world and hereafter. But the unfortunate ones fail to be tight-lipped and earn fire for them by much absurd talk, back-biting and telling lies. 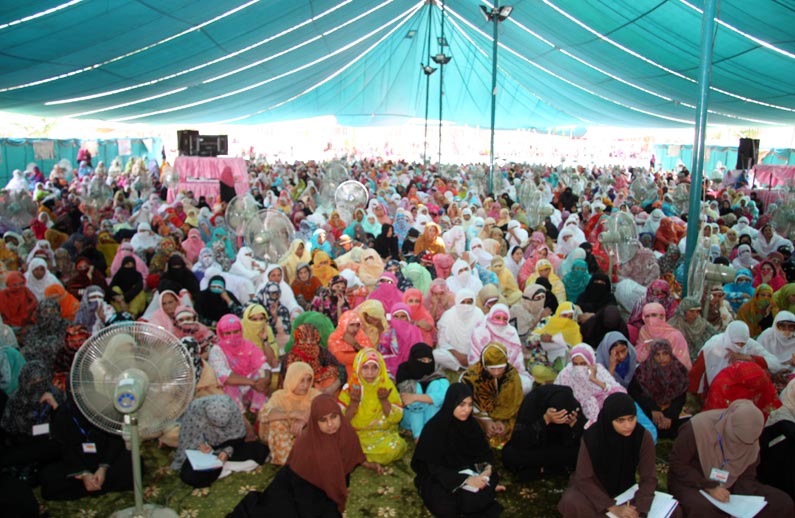 Shaykh-ul-Islam advised the audience to understand and follow the teachings of the Quran and Sunna. Silence is a great worship. One can remain silent even while being in a crowed. But the vice versa is also true. One can talk much even when alone. Worship requires to be quiet. But if one is performing a ritual prayer but inwardly remains busy in his mind talking to various people his worship is not perfect and is rejected by Allah. How unfortunate! Also compulsory is remaining quiet behind the prayer leader. Because it is essential to hear his recitation of the Quran by remaining quiet and also because it is the command given by the Quran and hadith. So if one has to be quiet even during worship why one should not observe silence during the worldly chores of life. That will bring one dividends.

There are Prophetic traditions signifying merits of silence. According to one hadith the one who does not speak unless it is required gains wisdom but the one who does the opposite loses wisdom. Similarly protection of private parts and the tongue ensures Paradise; and it is more the protection of tongue that matters much. He urged all the participants of Itikaf to take their training during 10-day Itikaf seriously. You are among thousands. This is an exercise for you to keep quiet while being in a crowed. Remain in company but inwardly remain lonely, busy with your Most Benevolent Creator. This will raise your status as servant and will take you nearer to Him. Then you will be known to Him as His pious and beloved servant. 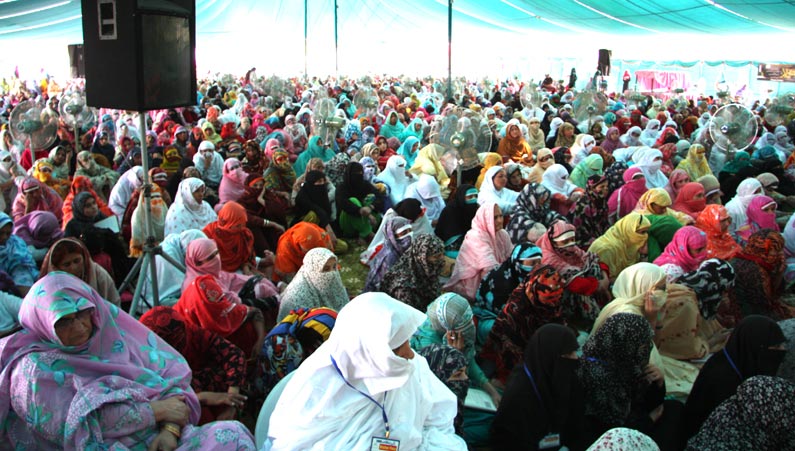 After the enlightening address by Shaykh-ul-Islam the ‘mu’tafikat’ offered Zuhr prayer after which Nazima WL Sumaira Rafaqat Advocate and Naib Nazima WL Sajida Sadiq held the scheduled meetings with Tanzimat from Bhakar, Pakpatan and Depalpur. They discussed their working and problems and provided guidance in the light of the Shaykh-ul-Islam’s instructions with regard to next year’s working. They also explained to them the method they should adopt to achieve the targets of gaining numerical strength in their respective areas.

Nazima Dawat Fareeha Khan briefed the Mu’allimat on conducting Haqa-jaat to achieve the desired results. They delivered Dars No. 1 in Halqa-jaat which included the divine commands contained in Sura Noor of the Holy Quran. The Dars introduced the Sura, elaborated the blessings of the Sura and briefly mentioned its contents: 1st to 12th commands. They are Hadd on fornication, Nikaah between the adulterer man and woman, Hadd Qazaf, freeing of Hadrat Aisha (may Allah be well pleased with her) from the false blame, prohibition of entering into someone’s house without permission, safeguarding eyes by lowering them, Nikaah and self-control, the Light of Allah, The promise of vicegrence to the people of faith and obedience, entering the house by taking permission along with immature children and servants, taking food together and invoking peace on the family members and the polite and submissive manners to be observed in the Holy Presence of the Beloved Messenger of Allah.

After the Halqa-jaat were over, Mahfil-e-Naat was organized. The students of Minhaj Girls College Naat Council presented beautiful nasheeds and created a love-laden environment. The participants felt a state of ecstasy during the Mahfil. Mohtarma Iffat Waheed offered supplications in the end.

Now was the time for Iftaar followed by evening prayer. All the participants then offered Isha prayer in the assembly area and performed Salat Taraweeh (the Ramdan Night Vigil). Later President WL Fatima Mash`hadi delivered a talk on the versatile, multifaceted and all-encompassing personality of Shaykh-ul-Islam and His teachings on personality building and becoming a true Mo’min by filling our hearts with intense love for Allah and His Beloved Messenger (blessings and peace be upon him). The ‘mu’tafikat’ then left for their rooms for rest.