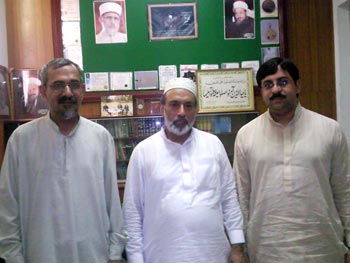 Rana Farooq Alam, finance secretary of MQI UK, visited the central secretariat of Minhaj-ul-Quran International in Lahore the other day. Upon his arrival, the staff members of the Directorate of Foreign Affairs welcomed him. Director Muhammad Musftafa (G.M. Malik) conducted the respected guest to the directorates, branches and departments of the Secretariat. Later, he called on Secretary General MQI Dr Raheeq Ahmad Abbasi and Muhammad Musftafa (G.M. Malik) and apprised them of MQI UK’s contribution to the promotion of peace, interfaith dialogue and harmony.