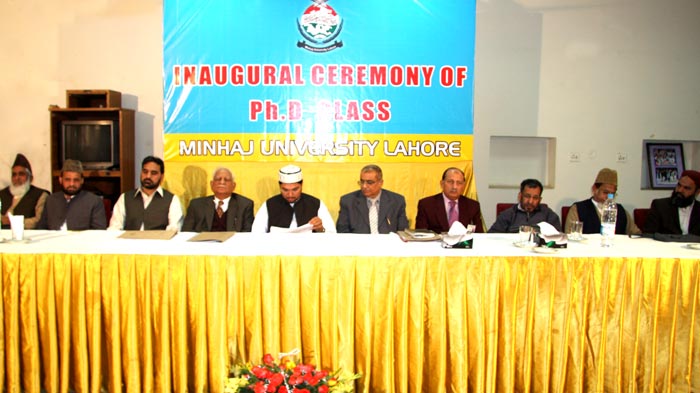 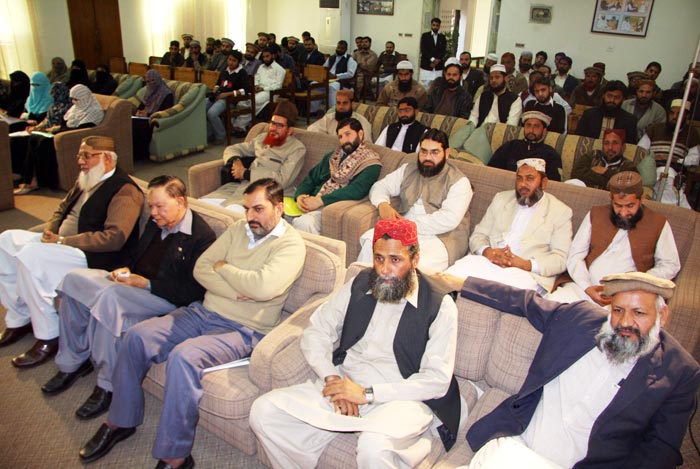 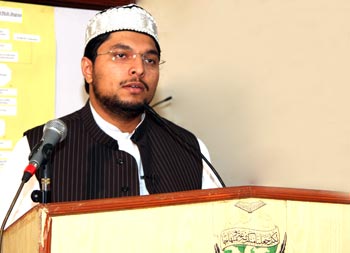 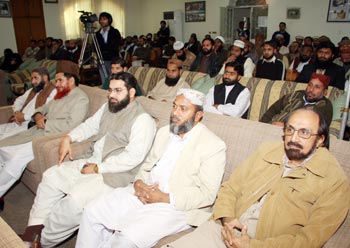 The formal proceedings of the programme got underway with recitation from the Holy Quran by Qari Khalid Hameed Kazmi, followed by recital of Naat by Qari Anser Ali Qadri. Dr Zahoor Ullah Qadri presented the welcome address. He congratulated the new entrants in PhD programme. He said that Minhaj University was a blend of modern and classical sciences. It was after the successful completion of M. Phil programme that PhD class was initiated. He hoped that the PhD scholars would put in their best in terms of hard work and research during their stay at the Minhaj University Lahore.

Speaking on the occasion, Prof Dr Muhammad Sharif Chaudhry, professor of M. Phil programme at the GIFT University Gujranwala, said that he was extremely happy to come over to MUL. He said that the students who graduated from this grand educational institution were spreading the real message of Islam in the world. He felicitated the students for their entrance in PhD programme after their successful completion of M. Phil programme.

Prof Dr Sarfraz Ahmad from GC University Lahore said in his speech that only those individuals and nations succeeded in the ultimate test of life who dedicated themselves to research and creativity. The start of PhD programme at the Minhaj University is an appreciable step, which would help promote higher education in Pakistan. 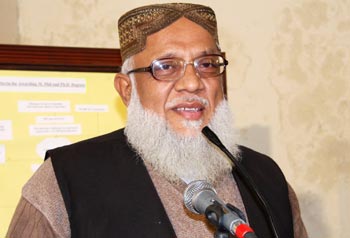 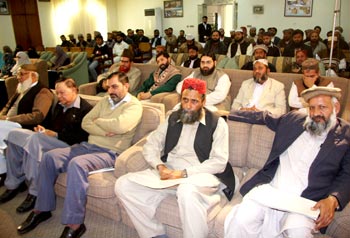 Prof Dr Arshad Khilji from International Islamic University Islambad said in his comments that the teachers whose students were industrious and hard working were privileged for such students would make their mark in life in their different occupations. He said that the heart of Shaykh-ul-Islam Dr Muhammad Tahir-ul-Qadri is blessed with love for the Holy Prophet (saw), piety and fear of Almighty Allah. He dedicated his entire life for the spread of education and the fruits of his efforts were not there in the form of Minhaj University. Dr Muhammad Tahir-ul-Qadri produced generation of such students who were playing their role in propagating real teachings of Islam in the world. The clarion call of Imam Ghazali, Imam Razi and other leading jurists was being voiced through Dr Muhammad Tahir-ul-Qadri in the contemporary age. He announced to render free services for the Minhaj University on the occasion. 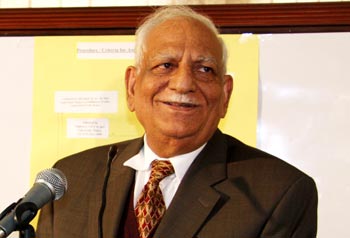 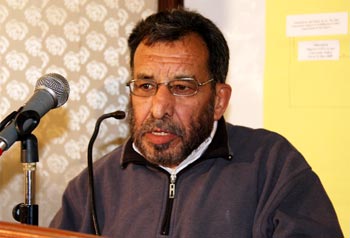 Sheikh Zahid Fayyaz, acting Secretary General of MQI, said on the occasion that MUL was progressing by leaps and bounds. The graduates of MUL were popularizing the name of their alma mater through their diverse services at the platform of Minhaj-ul-Quran International. He paid rich tribute to late vice Chancellor of Minhaj University Dr Nazir Ahmad Romani.

Dr Ali Muhammad, vice Chancellor of MUL, said that the dream which Shaykh-ul-Islam Dr Muhammad Tahir-ul-Qadri dreamed a few years ago was now being realized. He said that Minhaj University was one of the top 55 national universities and the government had placed in W i.e. A category.

Sahibzada Hussain Mohi-ud-Din Qadri, member of Board of Governors, MUL, and president of Federal Council of MQI, welcomed all professors, scholars from different universities and other guests upon their arrival at the Minhaj University. He also congratulated the PhD students on their selection of Minhaj University.

Sahibzada Hussain Mohi-ud-Din Qadri started his speech with the recitation of verse no 36 of the Bani Israel:

"And (O man!) do not follow that about which you do not have (correct) knowledge. Verily, ear, eye and heart, everyone of them would be held accountable."

He said that Shaykh-ul-Islam Dr Muhammad Tahir-ul-Qadri had founded a thought and a vision in 1983 in the Minhaj University. The establishment of the Minhaj University did not merely mean an addition to the existing number of educational institutions but was meant to revive the teachings of our forefathers, which are gradually getting eclipsed in this age of materialism. There was a time when Islam was at the pinnacle of its glory and Islamic culture had its penetrating impact on other countries. Today the Muslims have been lost in the daze of Western civilization and culture with the result that they had become fully oblivious to their own identity and culture. Western culture has totally enslaved us. 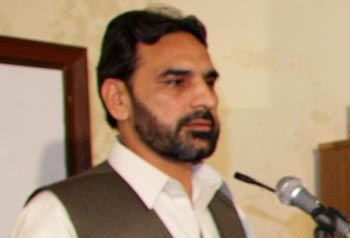 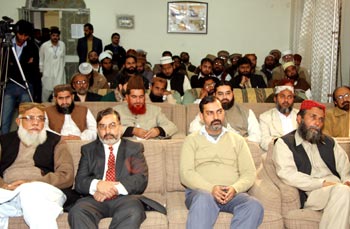 He said that Islam enlightened and educated the world but alas the days of glory were long over. Today the Muslims were getting bogged down in the abyss of ignorance by turning their back on their teachings. Such educational institutions are need to replace this darkness with light which combine modern and classical sciences. Minhaj University is engaged in spreading this education as a mission. Here education of modern and ancient sciences is imparted. Those students, on whose right hands is contemporary education and on their left hands is ancient education, would prove to be agent of change. 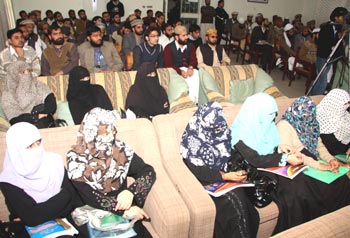 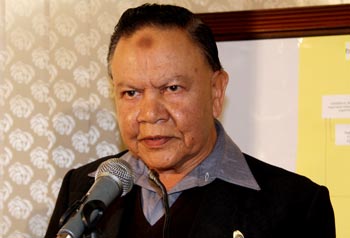 Sahibzada Hussain Mohi-ud-Din Qadri said that three things i.e. modern, classical education and sound character could be instrumental in regaining the lost glory. We needed to produce such scholars who should be well equipped with modern and classical education and power of morality. He said that the West was worried over the vices found in their society and culture. On the other hand, the Muslims were aping the Western values without giving thought to their identity and dangers associated with borrowing alien culture. Getting of education should be informed by pious action.

He said that we were afflicted with a malaise that once we finished our studies, we became arrogant and conceited. Revolting against this pattern of education, Shaykh-ul-Islam Dr Muhammad Tahir-ul-Qadri founded Minhaj University on the principles of morality, mysticism, character and enlightenment. These are building blocks for the creation of humility in people. 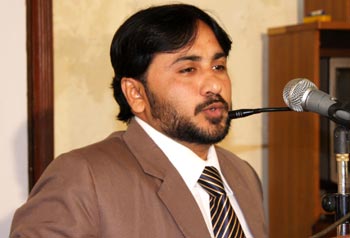 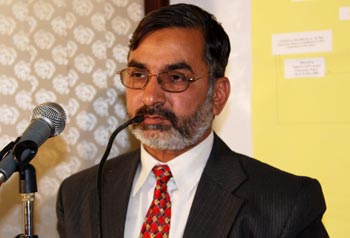 Addressing the students, he said that Muslim Umma and Pakistan were passing through critical phase of their life. If they wanted to replace this fall with rise, they would have devote themselves to learning about modern technology and scientific education. This learning should be coupled with spiritualism, sincerity, morality and good character.

Sahibzada Hussain Mohi-ud-Din Qadri again felicitated the PhD students for their selection of Minhaj University. Dr Masood Ahmad Mujahid thanked all the participants for taking part in the ceremony. Dr Muhammad Asghar Javed-ul-Qadri al-Azhari conducted the proceedings of the programme. The programme concluded on Dua led by Allama Muhammad Miraj-ul-Islam. Sumptuous lunch was served at the end.