The monthly spiritual gathering of Gosh-a-Durood was held on January 7, 2010 under the banner of Minhaj-ul-Quran International. Amir-e-Tehreek Miskin Faiz-ur-Rahman Durrani, senior naib Nazim-e-Ala Sheikh Zahid Fayyaz, Rana Muhammad Idris, Mufti Abdul Qayyum Hazravi, Haji Muhammad Saleem Qadri, Haji Riaz Ahmad and other central leaders were present on the main stage. Half of the venue was reserved for women, where they were in attendance in a large number. 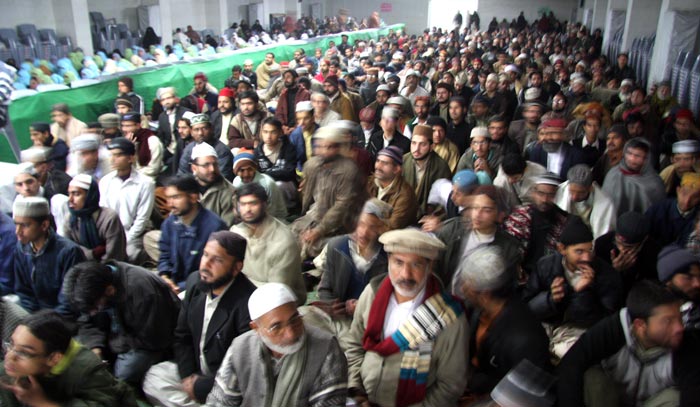 The formal proceedings of the programme got underway with recitation from the Holy Quran by Qari Khalid Hameed Qadri after the Isha prayers. Haidri Brothers of COSIS, Yasir Arafat, Shahzad Ashiq, Bilali Brothers and Minhaj Naat Council took part in the Naat-Khawani. The keynote speech of Shaykh-ul-Islam Dr Muhammad Tahir-ul-Qadri started at 11:30 pm. He told the audience that the Durood offered so far exceeded 11 billion, 64 corers, 30 lacs, 49 thousand and 546, where the number of Durood offered during the month of December alone was 52 corers, and 230. 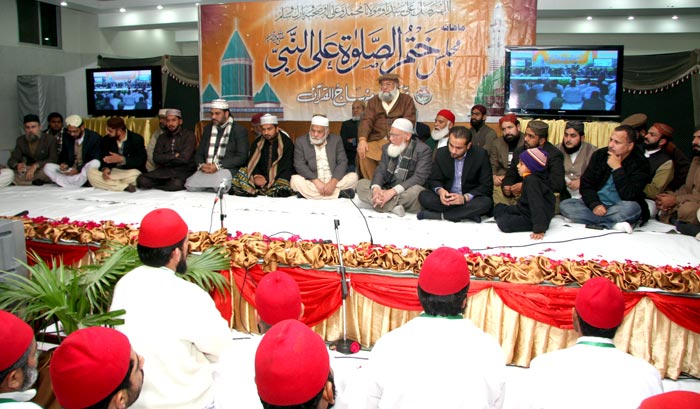 In his monthly keynote telephonic speech from Canada, Shaykh-ul-Islam Dr Muhammad Tahir-ul-Qadri said that soul was superior to body but the priorities of people had changed due to dominance of materialism. All human efforts, struggle and pursuits were directed towards generating more facilities and ease for body. Soul is supreme and more important because connection with body would end one day, once the death struck, but soul is interminable. He said if soul was pious, it would be a resident of Paradise and if it was not so, then its destination was Hell. Soul enjoys permanency like angels while it is the nature of human body to get dissolved and decomposed. “Effort is being made for what is mortal at the cost of what is permanent. So much so, that there is little realization of loss man is causing to himself. Since eternal reality and its fruits are hidden, what is manifest and visible attracts people,” he opined. 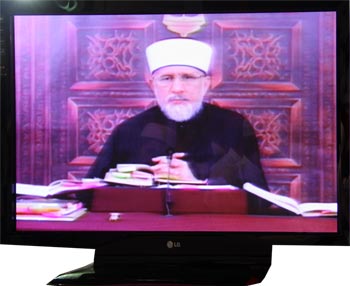 Shaykh-ul-Islam Dr Muhammad Tahir-ul-Qadri said that, as in case of superiority of soul over matter, in the same way, spiritual relationships enjoyed superiority and preference to those of blood. The relationship with religion is far superior to that of the world. Unless we regarded these relationships superior, there would be no benefit. Therefore, It is important to hold the spiritual and religious relationship in high esteem. The Holy Prophet (saw) said: do take piety, religion, character and conduct of the person into account whom you have befriended or whose company you have joined. The fact should be kept in mind while making friendships with people how was their relationship with Allah and His Prophet (saw). Knowing this is important because one learns from others, adopts their qualities; the opposite is also true. Citing an example, he said that rust does not appear on iron all of a sudden; it goes through evolutionary and gradual processes. One notices it only when rust becomes visible to human eye, messing up the actual structure of iron. Likewise, human eye cannot see smell. One can only smell it, but what a pity that our smelling capability is also on the decline. He said that the bad company effects adversely on the morals of people, thereby undermining his faith with the result that man's soul grows weaker. 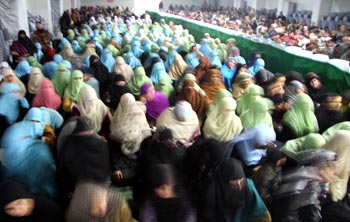 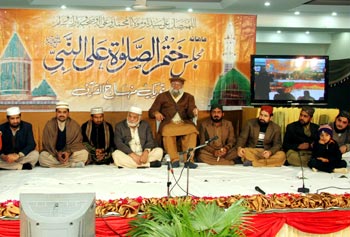 Shaykh-ul-Islam Dr Muhammad Tahir-ul-Qadri said that there were two types of company. If one cannot find the company of the spiritually most exalted, one should join those who remain in the blessed company of such people. In this way, one would be recipient of spiritual blessings in an indirect way. The most productive act after embracing faith is to join the company of pious people. The first condition of company is that the evil of other should be reciprocated by good. The believer is the one who accepts his friends along with their vices and negatives. Such a person justifies the mistakes of others while the hypocrite finds faults with people and leaves no stone unturned to humiliate and insult people. He does not give a chance to an erring person to seek forgiveness of his mistakes by hardening his ill feelings. 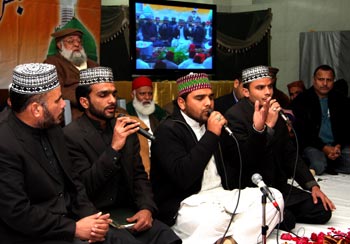 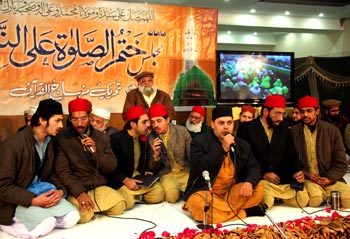 He emphatically urged the audience to forgive people for their mistakes and explore justifications for their mistakes themselves so that the very idea of a friend committing a sin leaves you. If the heart is not pleased, yet one should assume as if one had made the mistake. If we learn to develop our relationships with people in this manner, it will be an act of worship. Man should keep in mind dignity and respect for the spiritually exalted, while being in their company. 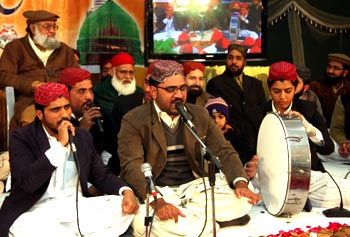 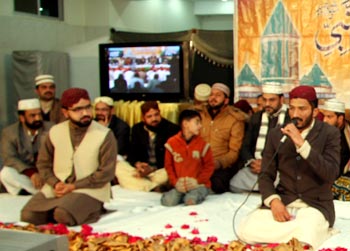 Shaykh-ul-Islam Dr Muhammad Tahir-ul-Qadri said that circumstances were such that negative emotions like anger, biases and frustration were on the rise in society. There is a need to arrest retaliation to anger. One should display forbearance and extreme endurance in case the other person was getting angry. Our societies are on rapid decline because evil is fought back with greater evil. Shaykh-ul-Islam said that Allah commanded to fight off evil by reciprocating it with good, but unfortunately deceit is advertised in a proud manner. He asked the youth to show respect and reverence towards elderly people, not because of their actions, but because of their age. Piety and being God-fearing were the domains of the pious and saints; if one makes it a standard pattern, respect will take lead and pride inherent in doing a good deed will show itself. 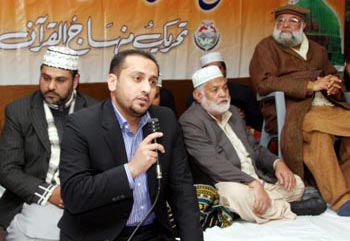 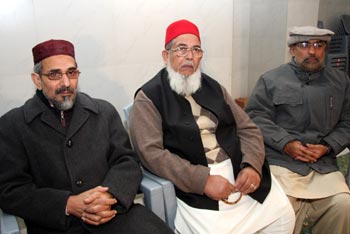 Shaykh-ul-Islam Dr Muhammad Tahir-ul-Qadri said that the respect of the parents was binding on children even though the former were sinful people. Allah Almighty would take the disobedient children to task for their bad treatment of parents. Explaining the point with an example, he said that a disobedient son against whom the parents pray but he cannot be deprived of his share of inheritance owing his disobedience, etc., because it was his entitlement being the son. Therefore, one should mete out good treatment towards his parents under any circumstances. He said that respect for elderly Jew, Christian or non-Muslim was not because of his faith but his old age. He said that Islam kept the treatment with animals into account, leave alone human beings who are crown of the Creation. 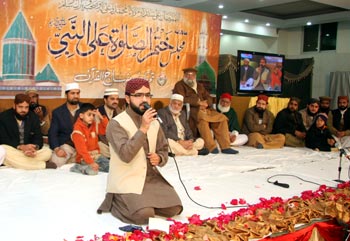 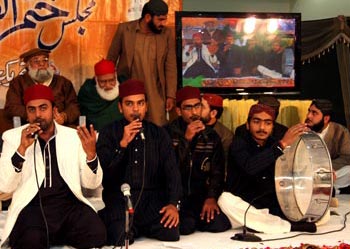 Dr Muhammad Tahir-ul-Qadri advised that advice should not be tendered without wisdom. One should never confront people in a bid to make them follow the right path by way of humiliation. The best course for achieving this objective should be to make him realize indirectly. He deplored the fact that we have a standard behaviour of confronting people with a view to bringing them into disrepute before others, thinking our conduct to be righteous and above board. Such an approach is generates negative consequences. He advised the workers and associates of MQI to remember their friends, people of Pakistan and Muslim Umma in their prayers. He asked them to spend on one another in a bid to decrease our respective worries. 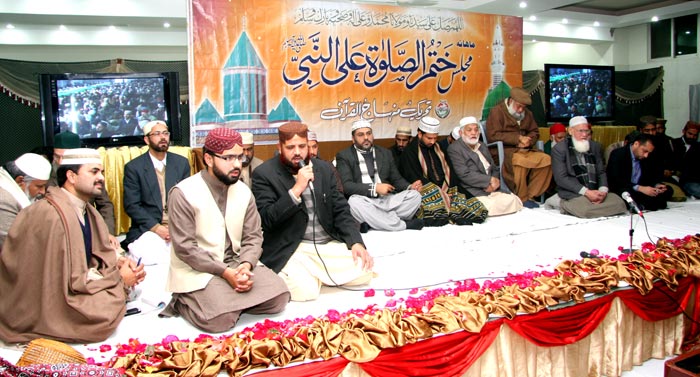