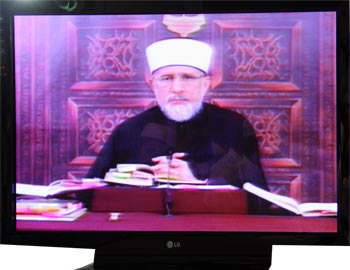 The 48th monthly spiritual gathering of Gosha-e-Durood for the month of December 2009 under the aegis of Minhaj-ul-Quran International was held on December 10. As a mark of protest against ongoing terrorism, suicide bombings and bomb blasts, the programme was named as "Prayer Night". This was the second edition of "Prayer Night". Miskin Faiz-ur-Rehman Durrani, central Amir-e-Tehreek, presided over the programme, whereas the distinguished audience included Dr Raheeq Ahmad Abbasi, Sheikh Zahid Fayyaz, Rana Muhammad Idrees Qadri, Rana Farooq Ahmad, Haji Muhammad Saleem Qadri, Ahmad Nawaz Anjum, Jawad Hamid, Dr Tanvir Azam Sandhu, Haji Riaz Ahmad and other leaders of MQI. A large number of participants including men and women attended the programme.

The formal proceedings started at half past eight after Isha prayers with the recitation from the Holy Quran by Qari Khalid Hameed Qadri. Shahzad Brothers, Bilali Brothers, Shahzad Hanif Madani, Anser Ali Qadri and Minhaj Naat Council presented Naat. After the Naat-Khawani, Shaykh-ul-Islam Dr Muhammad Tahir-ul-Qadri delivered live speech from Canada through video conferencing. Arrangements were also made to show the telephonic speech of Shaykh-ul-Islam in other cities of Pakistan like Rawalpindi, Islamabad, Karachi and other cities etc. Before starting his speech, Shaykh-ul-Islam stated that 33 corers, 25 lakhs, 96 thousand and 886 Durood was offered during the month of November 2009. Thus the total number of Durood offered stood at 12 billion, 12 corers, 30 lakhs, 49 thousand and 316.

Shaykh-ul-Islam condemned the suicide bombing in the Lahore's Moon Market, Peshawar, Rawalpindi and other parts of Pakistan and prayed to Allah Almighty to rest the departed souls in peace and give patience to their families to bear the irreparable loss of their near and dear ones.

Shaykh-ul-Islam Dr Muhammad Tahir-ul-Qadri chose the subject of "Fitna-e-Khawarij and Terrorism". He started his speech with the recitation of the following verse from the Holy Quran:

“On account of this We prescribed (this Commandment in the Torah sent down) to the Children of Israel that whoever killed a person (unjustly), except as a punishment for murder or for (spreading) disorder in the land (i.e. punishment for bloodshed and robbery etc.), it would be as if he killed all the people (of society); and whoever (saved him from unjust murder and) made him survive, it would be as if he saved the lives of all the people (of society; i.e. he rescued the collective system of human life). And indeed Our Messengers came to them with evident Signs. Yet, even after that, the majority from among these people are certainly those who commit excesses in the land.” (5:32) 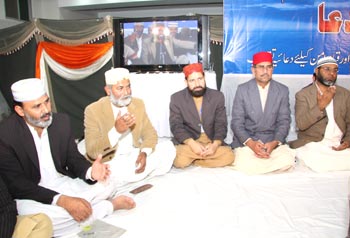 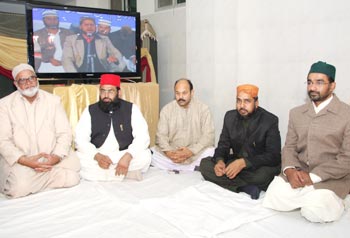 “Do not kill any soul whose (killing) Allah has declared unlawful unless (killing him) is just (according to the law of Shari‘a). But whoever is killed unjustly, We have indeed given to his heir the right (of retribution), but he too has not to exceed limits in killing (by way of retribution). He is indeed helped (by Allah. The responsibility of his help and support will be on the government.)” (17:33)

Shaykh-ul-Islam said that those perpetrating terrorism and carrying out suicide bombings were the 'Khawarij of the present times' about whom the Holy Prophet (S.A.W) had spelled out clear indications in more than 100 Traditions 1400 years ago. 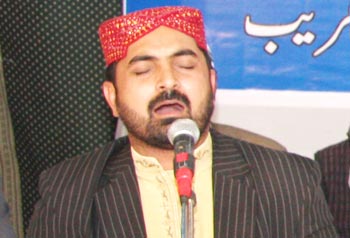 Throwing light on the exegesis of this verse, he said that some of jurists used the word 'fitnuwa' to mean 'to burn people to death'. The practical manifestation of this could be seen in the form of massacre of innocent humanity in suicide bombings and blasts. The Holy Quran has held out the tidings of torment of Hell for such people as a punishment. Allah Almighty would pay such people in the same coin by subjecting them to fire in the Day Hereafter.

He said that the Holy Quran says that the infidels used to worship their idols in the holy Kaba. When they were asked as to why they worshipped those idols for they were not gods and they themselves made them with their own hands, the infidels replied by way of justification of their actions that their objective was not to worship them but to get closer to God through their worship of those idols. They used to worship idols to get nearness of God. The Holy Quran rejected this argument holding both things to be different. That was not the way to get near to God. Shaykh-ul-Islam said that you people also look for 'Waseela' to get closer to Allah Almighty which He ordained in the Holy Quran: 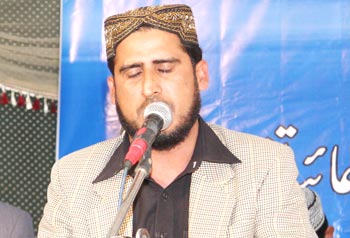 “O Believers! Fear Allah persistently and keep looking for means to (approach and get closer to) Him and strive hard in His way so that you may prosper”

Shaykh-ul-Islam said that we get near to Allah Almighty through prayer, donations, worships, and fasting etc. This basic idea of closeness is not wrong but bracketing it together with forbidden act is wrong and unjustified. It means the cause of anything cannot justify a forbidden act as rightful. If action is rightful and permissible, it can give one an idea of intention, cause and objective, for 'actions depend on intentions". If one offered prayer for sake of Allah Almighty, it would be accepted and if for the purpose of ostentation, it would summarily be rejected. Allah Almighty says in Sura Al-Maoon:

Shaykh-ul-Islam said that who else could be more cruel than those who were deserting Mosques, blasting bombs in Juma prayers and in markets, killing innocent children, women and people, attacking public places! Referring to a hadith, he said: 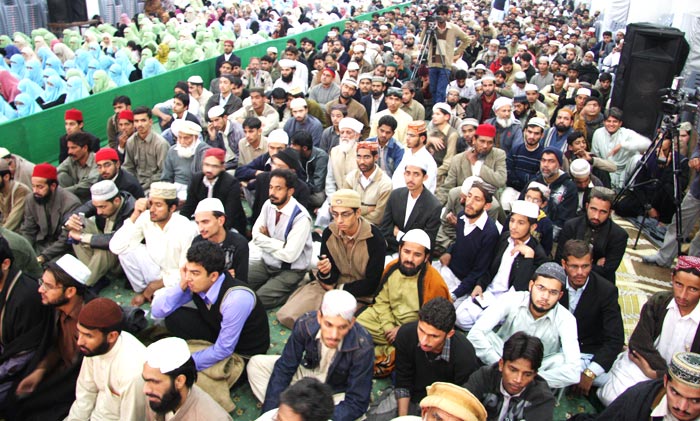 The Holy Prophet (S.A.W) said: If you were in fight with the disbelievers, you cannot kill their women, old people, children, Christian priests and monks. So much so you cannot kill animals, destroy their buildings nor can you set their things on fire.

He said that contrary to these manifest teachings of the Prophet of Islam (S.A.W), Muslims are being martyred in bomb blasts and suicide bombings. What is their fault? They are not even non-Muslims. There is no justification of such barbaric actions in the Holy Quran and Sunna. Shaykh-ul-Islam challenged that no Islamic scholar could offer a defence and justification of this massacre from Islamic point of view. He said that taking lives of the innocent children and people is the forbidden act which the Holy Quran also denounced. 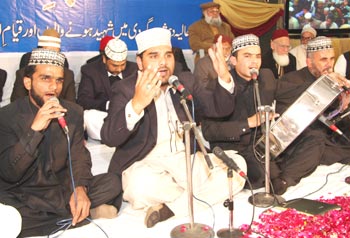 Shaykh-ul-Islam said that these are Khawarij who manufactured the theory of massacring innocent people and those doing so are the Khawarij of the modern times. He said that it was not his interpretation or reconstruction but the saying of the Holy Prophet (S.A.W). He (S.A.W) mentioned this in more than 100 traditions.

He said that this was religious edict of Allama Ibn Taymiyya who writes in “Kitab-un-Nabuwat" that those who fought against Hazrat Ali (R.A) were not the only Khawarij but there are there in every age and are present even today. Allama Ibn Taymiyya says that Khawarij cannot be recognized from their faces. People come to know them when they massacre innocent people. They use religion to prove their ideology true. Allama Ibn Taymiyya says that even the Holy Companions came to know of Khawarij after they killed people at a large scale. If Khawarij do not resort to killing people, they remain hidden from the public eye.

Citing various Prophetic traditions, Shaykh-ul-Islam stated that the Holy Prophet (S.A.W) said that the process of arrival of Khawarij would continue till the Day of Judgment. So much so that they the first group who would join Dajjal on the Last Day and kill people would be that of Khawarij. 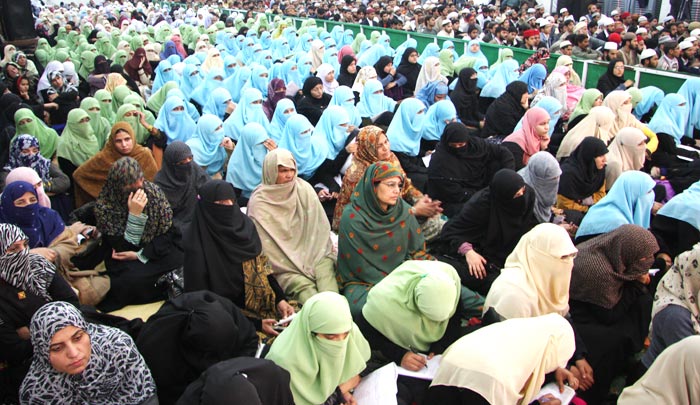 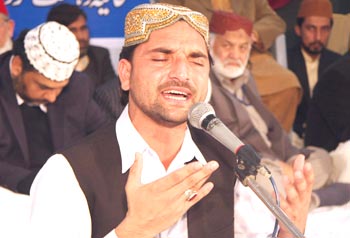 The Holy Prophet (S.A.W) said that Khawarij would talk of putting down their arms temporarily but no negotiation should take place with them, for this would be conspiracy of Khawarij to buy more time. They would stop their activities for the time being but would stage a comeback with more force and organization.

Referring to consensus hadith, Shaykh-ul-Islam Dr Muhammad Tahir-ul-Qadri stated that Hazrat Abu Saeed Khudri narrates: Khawarij would massacre people. The Holy Prophet (S.A.W) said that if he found them, would kill them in such a manner as Allah Almighty eliminated the nation of Aad and Samood whose not even a single child was left.

The first group of Khawarij which waged so-called Jihad against Hazrat Ali (R.A) said that they took out arms to establish and enforce the religion of Allah. The Islamic government had become dishonourable and they were left with no choice but to wage a holy war against it. These are the slogans invoked by the Khawarij in every age. The Holy Prophet (S.A.W) said that the slogans of these people would be pious and appealing and people would get overawed but heinous conspiracies would underline their slogans and their intentions would be bad. The Holy Prophet (S.A.W) said that the people who would be used as suicide bombers would be mentally immature and very young. The terrorists being apprehended today also turn out to be between 14 years and 20 years of age. Shaykh-ul-Islam said that the Holy Prophet (S.A.W) pointed out all the signs of terrorists.

The Holy Prophet (S.A.W) said that the terrorist groups of Khawarij would be comparatively young in age and mentally immature. Their slogans would be good and everyone would get impressed by their slogans. He said that these were the three signs. They would talk of faith but their faith would not have gone down their throats. He (S.A.W) said: kill them wherever you find the.

There is another hadith of Imam Tibrani narrated by Hazrat Abdullah bin Ibne Abbas: when the holy Companions would go to fight a war with Khawarij, the latter would sometimes be offering prayers, prostrating themselves and reciting the verses from the Holy Quran at times. It has been recorded in the books on the life of the Holy Prophet (S.A.W) that when the Companions would see them in such states, they would come back and say as to how they should fight them when they were so pious and worshipful.

Shaykh-ul-Islam Dr Muhammad Tahir-ul-Qadri stated categorically that those who were shedding innocent blood through bomb blasts and suicide bombings in markets, public places, and Mosques had no relation with Islam. The government should not give them any concession. Their elimination is a must for the establishment of law and order. Dr Muhammad Tahir-ul-Qadri clarified that there is no concept of taking anyone's life except by way of Qisas.

Addressing the incumbent government, Shaykh-ul-Islam said that stopping the operation against terrorism without the complete elimination of terrorists would be a grave mistake. He also ruled out the possibility of holding dialogue with the terrorists for it violated the Islamic teachings. The government should fully eliminate such elements who have challenged the writ of the state.

Dr Muhammad Tahir-ul-Qadri made it clear that he gave religious verdict against terrorism for the sake of Pakistan and Islam and not at the behest of anyone. He told that his detailed edict had crossed 600 pages. It would be launched in the book format after its publication before the local and international media. The programme ended on Dua.