Distinguished speakers at a pre-budget seminar organized by Pakistan Awami Tehreek have demanded of the government to establish Budget Regulatory Authority, increase budgetary allocations for health, education and jobs creation, bring the wealthy class into the tax net, and take concrete actions to rid the country of the programmes with the International Monetary Fund (IMF). They agreed to the need of cutting down on non-development expenditure and bringing about comprehensive reforms in the tax regime of the country, dubbing it highly repressive, rigourous and iniquitous. 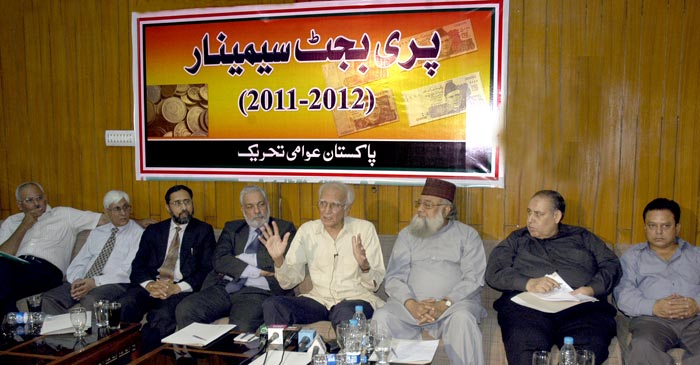 The speakers said that political forces across divide stand for pro-elitist economic and political structures, which benefit them in the short and long terms. They asked the people to stand up against the exploitative system and vote their true representatives from among themselves into power so that they could reflect their aspirations in the budget-making processes. They held that the time was up for the corrupt ruling elite as people were increasingly becoming aware of their rights and it is a just a matter of time before they became master of their own destiny. 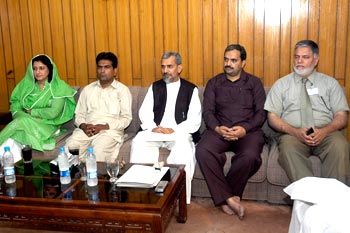 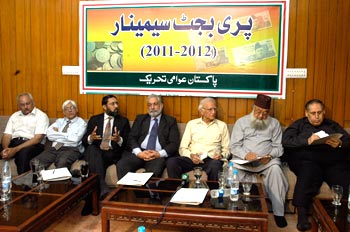 In his speech at the occasion, Dr Mubashir Hassan said that the budget has nothing to do with the poor as it only reflects interests of the wealthy elite. He said that if people want to formulate their budget, they must establish their government first. He added that dearness is a means by which resources get transferred from the poor to the rich. All political forces, he said, have formed consensus on fiscal legislation aimed at benefiting and enriching themselves only. Dr Hassan said that those in power do not represent the people and there is no system of accountability in place which could bring the corrupt ruling elite to justice. He said that it is a bitter but undeniable reality that the intellectuals always committed treason against the country.

Expressing her views in the seminar, renowned social activist and the president of Working Women Pakistan, Ms Aaima Mahmood, said that the upcoming budget would bring in more bad news for the working women of Pakistan. Pinning hopes, she said, on feudal and capitalistic sections for better future was but a pipedream. She questioned the disproportionate and huge allocation of money for security establishment when death and destruction at the hands of terrorists has become norm and no day passes when an act of terror does not take place in the country. She emphasized the need of taking positive steps in the upcoming budget for the welfare of the working women and getting rid of the worst energy crisis, which has gripped the country for last so many years. 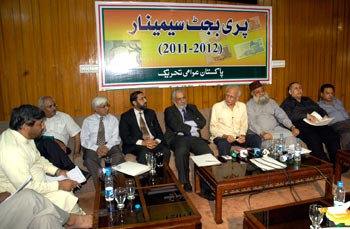 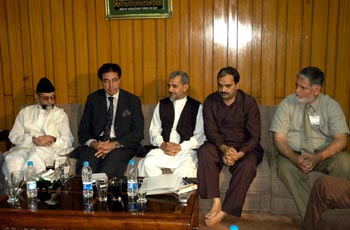 Seasoned parliamentarian Riaz Ahmad Fatyana said that Pakistan’s biggest problems are ignorance, lawlessness, energy crisis, extremism, corruption and terrorism and how pro-people budget could surface in these circumstances. He said that the country’s politicians were incompetent and it was bureaucracy, which was running the show. Load-shedding has taken a heavy toll on the industry with mass unemployment. The government was printing currency to the tune of over one billion rupees on daily basis, which contributed to rising inflation in the country. He said that we have fallen victim to misplaced consumerism and lavish spending and the banks had set high mark-up rates. He further said that as long as we did not distinguish between need and luxury, our predicaments would never end. Resetting national priorities was the only course available to change our destiny, he concluded.

Brig. (r ) Farooq Hamid Khan said that Pakistan’s budget was finally made ten days ago when the country’s top economic managers met the IMF authorities and sought their approval of what the budget would be like. He said that only the ritual would be performed when finance minister would read out a budget speech ad verbum. He said that the rich ruling elite was fleecing the poor in different ways, while the corruption was at its peak with no system of accountability in place to apprehend the corrupt. He said that the interest of the poor would be served if the rich got taxed but who would bell the cat is a moot point. He claimed that the load-shedding would come to an end three months ahead of elections.

Dr Shahid A. Zia said that the day when we prepared budget without the help of IMF would be the day of celebrations as it would augur well for the bright future of the poor. He said that there was a relationship of a master and client between the employer and employee. He highlighted the need of cutting down non-development expenditure and work out effective privatization policy to remove the dead wood, which is a big burden on national exchequer. He said that the bureaucrats were running the country, which was unfortunate. He added that a government of technocrats could take the country forward.

Anwar Akhtar Advocate and G.M. Malik, leaders of Pakistan Awami Tehreek, said that the establishment of Budget Regulatory Authority was the need of the hour. They said that unless three percent of the corrupt elite was expelled from Parliament, no budget would be a pro-people budget. They asked the 97% people to stand up and be counted. Mr. Sohail Mahmood, a leader of traders, also spoke on the occasion. Raja Jamil Ajmal, Aqil Malik, Jawad Hamid, Hafiz Chaudhry, Qazi Faiz and others were also present on the occasion.