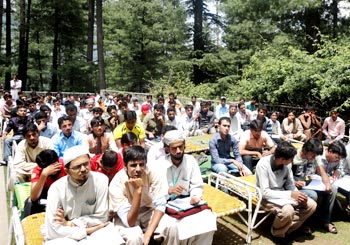 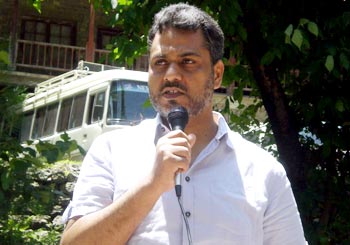 A three-day meeting of Students Parliament and Training Camp was held under the banner of Mustafavi Students Movement in the Youth Hostel at a recreational place called Khanpur of Ayubia, Murree from July 8 to July 10. The office bearers of MSM from different colleges, universities, medical colleges from all over the country attended the meeting. Representatives from interior Sindh, Balochistan and KPK also made special appearance in the moot.

The proceedings of the camp got underway with the recitation from the Holy Quran by Hafiz Zia on July 8 followed by Naat, which was recited by Reehan Mustafavi. Abdul Ghaffar Mustafavi, Secretary General of MSM, welcomed all participants for their attendance of highly important meeting of the student body. All members introduced themselves individually afterwards. 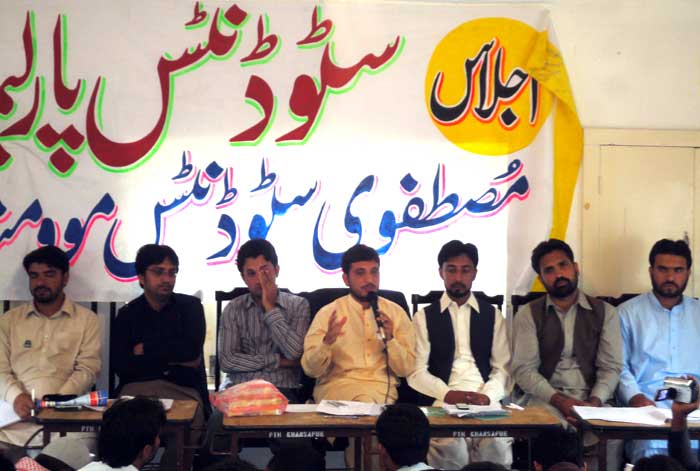 Mehfil-e-Naat was held in which renowned Naat Khawan such as Qamar Hanif Abadi and Shahzad Mustafavi had the honour of reciting Naat. A special video clip prepared on the life of Shaykh-ul-Islam was also shown on the occasion. The first session on the first day came to an end at 12 at night with special Dua.

The proceedings of the second session on July 9 got underway after the Fajr prayer followed by Naat. The participants were served delicious breakfast. Tajjamal Hussain Inqalabi, president of MSM, presided over this session, while Sheikh Zahid Fayyaz, Deputy Secretary General, was the chief guest on the occasion. Other guests included Tanvir Ahmad Khan, Amjad Hussain Jutt, Ch Baber Ali, Ishtiaq Hanif Mughal, and other office bearers. 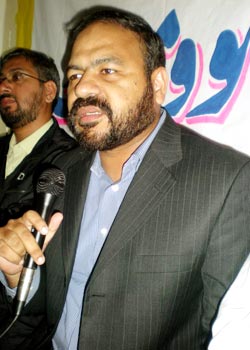 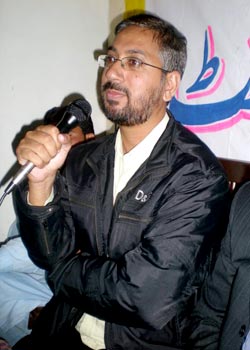 Hafiz Abdul Ghaffar, central Secretary General of MQI, conducted the proceedings of the session. He welcomed all guests and thanked them for their participation.

Speaking on the occasion, former MSM President Amjad Hussain Jutt congratulated the incumbent team of MSM on ensuring full participation of members of Youth Parliament. He expressed the resolve that the time was not far when Pakistan would become hub of peace and tranquility.

He said that the message of MSM needs to be propagated in the universities to organize youth to play their role in this regard.

Ch. Baber Ali, president of MYL, congratulated MSM on the successful conduct of training camp and assured of his complete cooperation. 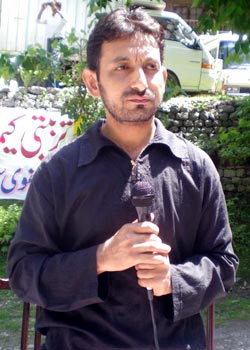 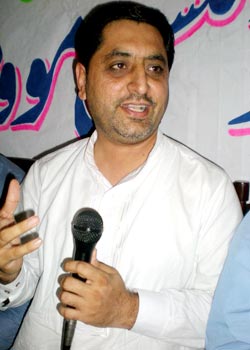 Addressing the meeting, Sheikh Zahid Fayyaz, senior Deputy Secretary General of MQI, paid a rich tribute to MSM on the full and active participation of members of Youth Parliament. He said that MSM has been consistently propagating its message to different sections of society and the successful conduct of the training camp is a glaring proof of this. He said that the students belonging to MSM needed to promote their message in educational institutions so that the purpose for which Pakistan was established could b accomplished. He said that the worker is the one who fears Allah Almighty, possesses extreme love for the Holy Prophet (SAW) and is loyal to the leader. He said that MSM as the representative of the students is at the forefront of peaceful movement for change in the society. 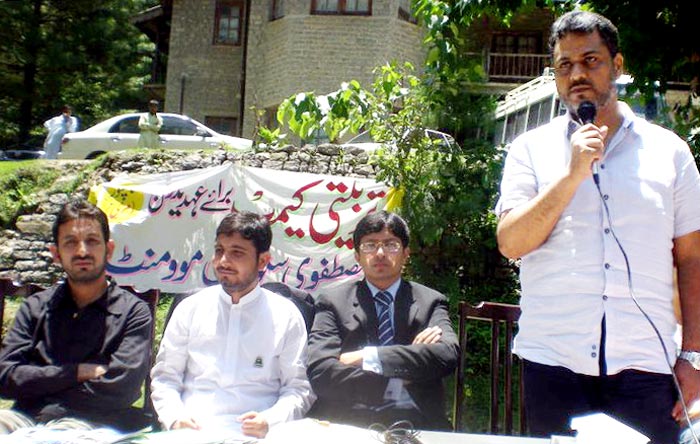 A glowing tribute was presented to Sajid Nadeem Gondal, former senior vice president of MSM, on his excellent three-year performance. Mian Irfan Asif Chishti’s nomination was announced on the occasion as a replacement of Sajid Nadeem Gondal.

Speaking on the subject of “Come, establish Islam as a dominant force” in the meeting of Youth Parliament, former president of MSM, Tanvir Ahmad Khan, said that Islam came to the world as a dominant faith. He underscored the need of projecting the real Islamic teachings in the world so that it could sufficiently become clear that the only way out of present-day predicaments and challenges is that we become true Muslims. He said that it is by implementing the Islamic political system that we can set up a welfare society along Islamic, social and economic lines, a society which is beneficial for entire humanity. He said that we would have to work really hard for transformation of society. He further said that Allama Iqbal envisioned the idea of Pakistan, the Quaid-e-Azam translated the idea into reality and it is Shaykh-ul-Islam Dr Muhammad Tahir-ul-Qadri in whose hands the purpose of establishment of Pakistan would be accomplished. 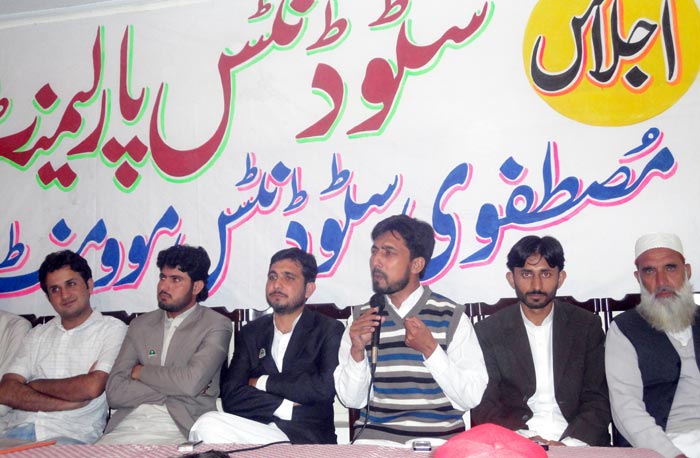 The first sitting of second session came to end with Dua followed by luncheon. Time between 2 a.m. and 8 p.m. was allocated for recreational activities.

Presided over by MSM president Tajjamal Hussain Inqalabi, the second sitting of the second session got underway after the Isha prayers.

Hanif Mustafavi, former MSM president, was the guest of honour on the occasion. Other distinguished guests included Malik Saeed Alam, Dr Ayub Baig, Sami-us-Zafar Noshahi and others. The proceedings of the second sitting started with the recitation from the Holy Quran by Saleem Mustafavi followed by Naat. 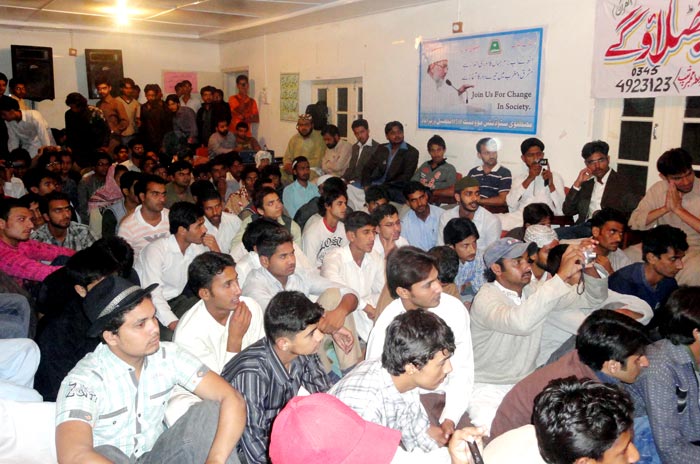 Sajid Nadeem Gondal thanked and welcomed the former members and office holders of MSM on their participation in the training camp. The purpose of the second sitting of the session was to promote the intellectual and ideological thought of Shaykh-ul-Islam Dr Muhammad Tahir-ul-Qadri and foster leadership skills, communication skills and career building among the students.

Speaking on the occasion, Sami-us-Zafar Noshahi said that the targets must be fixed quite high so that one is infused with the spirit to accomplish the impossible. It must be followed by sound planning aimed at realizing the targets. He presented his own life as an example. The students benefitted a lot from his lecture. 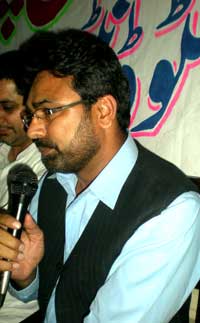 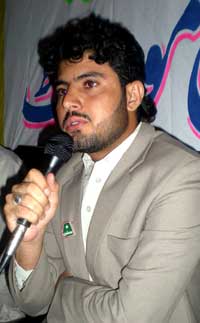 In his lecture to the training camp, Dr Muhammad Ayub Baig said that it is important for every worker of MSM that he is also the best and most talented student of his educational institution so that other students could listen to him and take his message seriously.

Addressing the training camp, Malik Saeed Alim, chairman of MSM Senior Council, said that every worker of MSM must be a living example of goodness and reflect the personality of his leader. He must not fall prey to despondency at point in life and consistently pursue the mission of peace and harmony in the society.

Delivering his keynote speech, former MSM president Hanif Mustafavi threw light on the qualities and responsibilities of leadership. He referred to the first address of Hazrat Abu Baker (RA) he delivered on being elected as the leader of the faithful. He said that MSM is not an organization of workers but of leaders. He urged the workers to acquire the qualities of a successful leader. 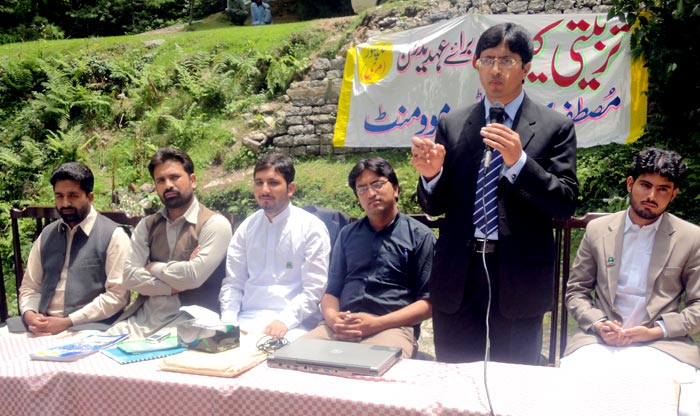 In his concluding remarks, Tajjamal Hussain Inqalabi, president of MSM, thanked the senior leaders of MSM for their participation and encouragement to the incumbent body of MSM. The second sitting concluded with Dua followed by sumptuous dinner.

The proceedings of the third day got underway with the recitation from the Holy Quran following breakfast. Muhammad Aqil had the honour of presenting Naat. The chief guest of the third session was Sajid Nadeem Gondal, senior vice president of MSM. Speaking on the occasion, Muhammad Zamir Mustafavi, secretary information of MSM, said that the contact between central body of MSM and local chapters would be further strengthened with a very robust follow-up strategy.

Underlining the importance of media, he said that this was an age of both print and electronic media. Therefore, the local chapters of MSM must concentrate on reaching out to media to convey their message at a wide scale. 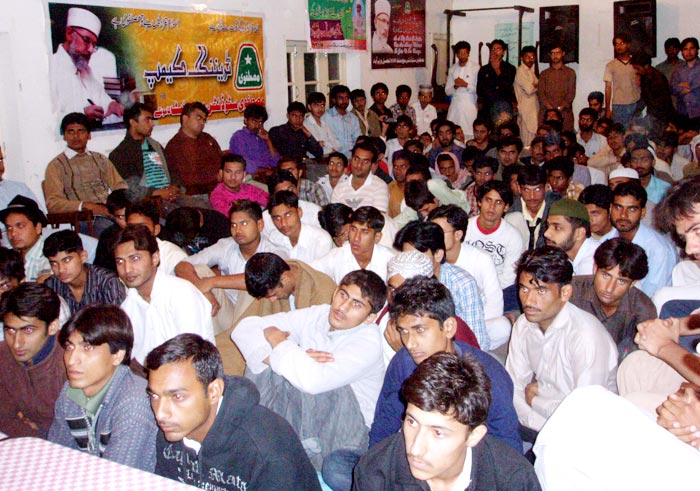 In his speech to the camp, the newly elected senior vice president of MSM, Mian Irfan Asif, said that the followers of the Holy Prophet (SAW) established this country and only they would save this dear homeland. He said that the day was not far when Pakistan would turn out to be a hub of peace and progress in the region and beyond. He emphasized the importance of internet and other social media to spread the message of MSM.

Chief guest, Sajid Nadeem Gondal, recalled his time spent in the service of MSM. He threw light on some of the significant challenges he faced during his stint in office. He said that he was ready to offer any kind of service for MSM. He expressed his wish that he wanted to see MSM blossoming in every educational institution. The members of Youth Parliament paid Sajid Nadeem Gondal rich tribute on his three-year service.

Delivering his concluding remarks, Tajjamal Hussain Inqalabi thanked the studnets who came from across the country to attend the meeting of Youth Parliament. He said that the students need to work with renewed zeal and vigour. He informed the participants that MSM is holding All

Pakistan Students Convention in October this year, which will set a new direction for MSM. He said that hundreds of thousand of students would attend the Convention. He urged the participants to make the Convention a roaring success. He asked the students to ensure maximum participation in the annual spiritual gathering in the holy month of Ramadan.

The proceeding of a three-day camp came to an end with Dua. The studnets described the moments spent in the camp as most memorable ones.