Setting a precedent of self sacrifice, Shaykh-ul-Islam Dr Muhammad Tahir-ul-Qadri has donated jewelry of his wife and daughters in law to newly established Islamabad March Fund on Thursday. Emotional scenes were witnessed during the International Workers Convention. As soon as Dr Muhammad Tahir-ul-Qadri presented the entire jewelry of his family, the female workers present in the Convention also donated their jewelry. Within minutes, huge money was raised for the Islamabad March.

The act of sacrifice revived the memory of 1947 when men, women and children donated generously to contribute to freedom struggle. The MQI workers announced to give millions of rupees at over 1200 places where the proceedings of the International Workers Convention were being attended. People belonging to every income group donated money according to their capacity. Dr Tahir-ul-Qadri refused to accept any money from Minhaj-ul-Quran International (India chapter) and instructed them to spend the same amount on welfare projects there. 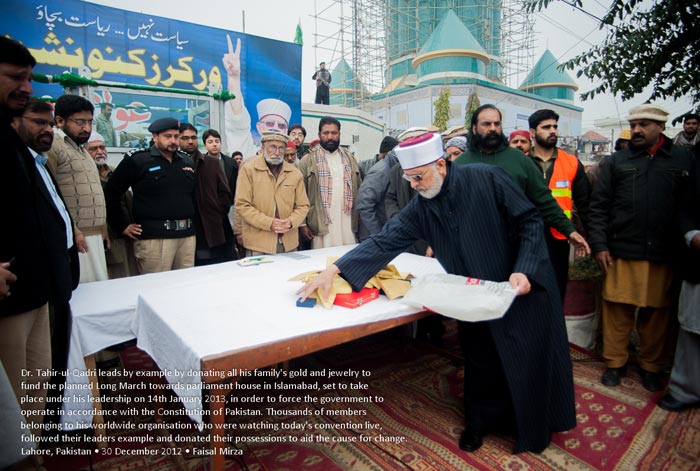