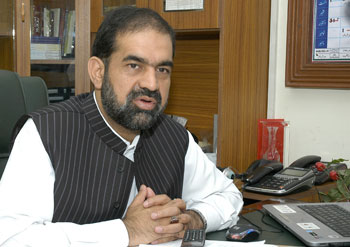 President of Pakistan Awami Tehreek Dr Raheeq Ahmad Abbasi has said that the performance of the Election Commission is disappointing to say the least. He said that expecting any different results from the so-called electoral exercise in May was foolhardiness keeping in view the image and status of the organizing body. He said that PAT could not become part of this crime.

Dr Raheeq Abbasi expressed these views while talking to a delegation of PAT (Islamabad chapter) that called on him in his office in Lahore yesterday. The delegation included PAT Islamabad chapter President Shahid Shunwari, Secretary General Ghazanfar Khokar and others.

PAT President said that the new nomination forms opened the doors of Parliament for the tax evaders and loan defaulters and the schedule announced by the ECP did not have sufficient time for meaningful scrutiny of the candidates. He said that ritual of elections would provide longevity to political authoritarianism. He warned that terrorism, violence and extremism would flourish in the backdrop of election results. He said that the consequent deteriorating law and order situation could endanger the country’s security and stability.

Dr Raheeq Abbasi said that PAT workers would stage sit-ins on the polling day across the country but made it clear that these sit-ins were not meant to disrupt the election process. He said that these sit-ins would be peaceful and not be held close to the polling stations. He asked the people to attend PAT’s sit-ins in large number to register their disapproval of the oppressive, corrupt and pro-elite system. He said that those who were criticizing the planned sit-ins were political orphans who wanted to curry favour with their masters.