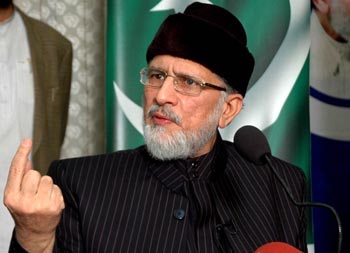 Dr Muhammad Tahir-ul-Qadri, the leader of Pakistan Awami Tehreek, has said that the Election Commission was fully aware of the situation and that is it why ‘the loyalists’ included a column in the nomination forms for the major defaulters to sail through the scrutiny process unquestioned. He said that it would now be easy for such elements to get stay on the cases from the courts and financial institutions. He said that big robber barons would go through the process scot-free, while the small fish would be caught to give an impression of harsh scrutiny. He alleged that the Election Commission was presiding over an election of ‘commission’. He asked the people to attend the PAT’s public sit-ins on the polling day to reject the elections.

Dr Muhammad Tahir-ul-Qadri expressed these views while addressing a meeting of party workers in London. He said that compromised scrutiny was tantamount to defacing the soul of democracy. He said that PAT demanded the fixation of 30 days or at least 15 days so that the ECP could be able to have sufficient time at its disposal to cater to all-important task of comprehensive scrutiny.

Dr Tahir-ul-Qadri said that since Parliament’s job was to carry out legislation, those sitting in its august institution should be men and women of good character and not known to have been involved in loan default and tax evasion. He predicted that under the incumbent system, majority of the people getting ‘elected’ to legislatures would be tax evaders and loan defaulters. He said that those who sought public mandate from people regarded politics as their profession.

Dr Qadri asked as to why Election Commission was hesitant to post the details of candidates on its website. He said that the people had right to know about all details of every candidate who intended to run for elections. He said that the compromised Election Commission, through some cosmetic steps, was trying to give an impression as it was going to hold fair, free and transparent polls in the country.