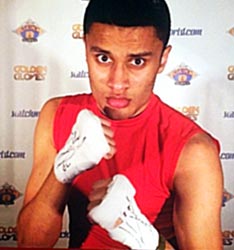 He has been in the company of Shaykh-ul-Islam Dr Muhammad Tahir-ul-Qadri since the age of 12 and has attended al-Hidaya camps in UK. He is currently a senior in the High School and is getting ready to graduate this summer and moving on to university in Dallas to pursue his career in Kinesiology in physical health. At an early age, Mobeen enjoyed sports and earned the Black Belt in martial arts when he was 13. Mobeen also has a keen interest in the sport of Boxing.

Mobeen began boxing at the age of 16 with a trainer in the Dallas, Texas (USA) area. He participated in many tournaments. Of late, he has been winning a series of matches and recently won a renowned tournament, the "Dallas Golden Gloves" and was crowned the champion in the city of Dallas on January 24th, 2014. The "Golden Gloves" is the annual competition for national amateur boxing in the United States and is the biggest tournament of the year. 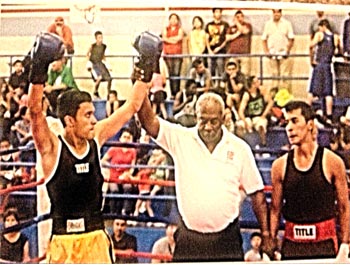 It is pertinent to know that when Allah Almighty created man, He ingrained in his personality various aspects and angles. He has blessed man with the biological aspect of his personality. He has added to his biological entity the psychological, intellectual, philosophical, social, cultural, spiritual and transcendental aspects. This way, the Lord has made man the most exalted and unique work of His masterly creation. So Islam has commanded us to fulfill all the various kinds of needs and requirements of human personality in order to make it a balanced and tolerant personality. And this balance and tolerance in personality has been declared as Islamic discipline.

In compliance with the Sunna of the Holy Prophet (blessings and peace be upon him), it is interesting to know that Shaykh-ul-Islam Dr Muhammad Tahir-ul-Qadri is fond of sports as evidenced by Mobeen's personal experience of living in the company of Shaykh-ul-Islam.