Talking to renowned anchorperson Mubasher Lucman in his programme, Khara Sach, Shaykh-ul-Islam Dr Muhammad Tahir-ul-Qadri condoled with the family members and relatives over the death of Haji Abdur Razzaq Yaqoob, the chairman of ARY Group. He said that late Haji sahib was a God-fearing person, a patriotic Pakistan, and the lover of the Holy Prophet (peace be upon him). He said that Haji sahib worked dedicatedly for the welfare of less privileged sections of society particularly the poorest of the poor, adding that he fought a war against corruption and promoted the culture of transparency and fair play through media. Dr Qadri prayed to Allah Almighty to bless the soul of late Haji sahib in eternal peace.

Dr Tahir-ul-Qadri said that MQI had its centres in over hundred countries of the world that were working for promotion of peace, interfaith dialogue and harmony. He said that MQI secretariat already issued written instructions to arrange special Quran Khawani functions on this weekend, adding that he was instructing MQI workers through this programme to hold these functions and pray for late haji sahib. He said that tribute would be paid to Haji sahib for his services.

In reply to a question of Mubasher Lucman, Dr Tahir-ul-Qadri said that the country had suffered a staggering loss of $ 78 billion due to terrorism. He said that Pakistan was at the second position in terms of terrorism throughout the world and top-rated country among the nations affected by terrorism. He said that the so-called dialogue process launched by the government with the Taliban was indefinite, which did not have any time-frame.

Dr Tahir-ul-Qadri said that the self-serving political elite had dubbed as democracy the parliament that came into being through rigging, fraud, and corruption. He said that this ‘punctured’ democracy was worse than dictatorship. He said that everything being done in Pakistan was contrary to principles because the government was more interested in ‘its politics and trade’ than national interests. He said that those holding the power cared more about saving their politics than saving the state. 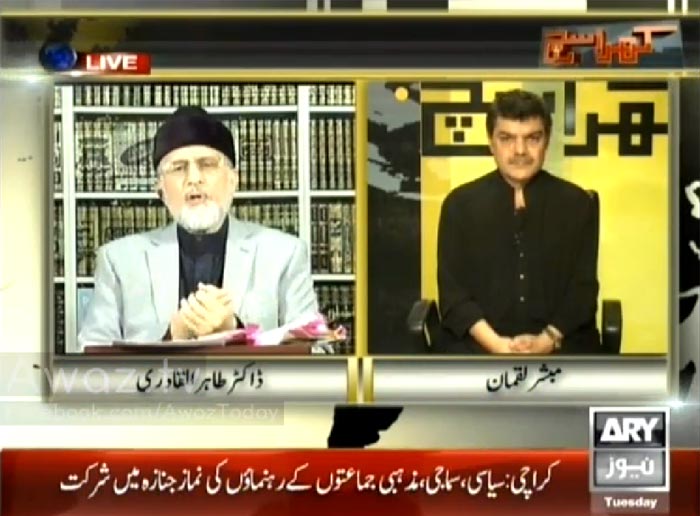 Dr Tahir-ul-Qadri said that we would have to stand by the armed forces to raise their morale and commend their sacrifices in the defence of the motherland. He said that the military was the only institution that could get rid of menace of terrorism and provide peace to this violence-stricken nation. He said that it required an elaborate political strategy and a complete programme which the Parliament and the Cabinet were unable to offer it. He said that the present set of rulers did not have it in them to provide leadership at crucial juncture as they lacked intellectual prowess for fine details.

Dr Tahir-ul-Qadri said that it was height of confusion that the government had convened a meeting to discuss security policy and concluded that dialogue would be held to resolve the issue with the Taliban. He said that the government did not have any vision, roadmap and time-frame as to what to do and how to do it. They only contented themselves with the cliché that they wanted to seek negotiated settlement of the problem of violence and militancy without thinking through the fine details. He said that these were the same talks whose ‘Tamasha’ the entire nation had seen with their own eyes for one and half month. He said that it was height of their non-seriousness.

Dr Qadri said that had any such matter occurred in the United States, the US President would have come on national TV and spelled out an outline and taken the entire nation into confidence. He said that it has been a practice in the UK that Tony Blair and David Cameron took their nation on board in an attempt to clear confusion and chart out a straight path ahead. He said that it was height of the rulers’ incompetence that the Minister for Commerce was giving briefings on national security policy to be followed by a briefing of the Minister for Interior in the Parliament. He said that the entire nation and democracy had been rendered into a joke. He said that the rulers were selling the national assets in the garb of talks Tamasha.

Dr Tahir-ul-Qadri said that the only way to get rid of corruption and ensure protection of national assets was that the common man stood up to the rulers through democratic and peaceful means for the establishment of real democracy in the country. He said that Allah Almighty has blessed Pakistan with abundant natural resources but added in the same breath that national assets were being sold. He said that corrupt rulers had been brought into power to undermine the nuclear status and sovereignty of Pakistan. He asked the nation to become part of caravan of ten million namazis. He said that he would soon give a call for peaceful revolution, adding that people should not sit at home but rather strive peacefully for restoration of their rights.