The 4th day of sister’s I’tikaaf 2007 was also a great inspiration. Alhamdulilah, this I’tikaaf camp is a great training procedure in which thousands of women gain knowledge and inspiration for Islam. A combined schedule of training Halaqa jaat, Mehfil e Naat, Collective prayer and much more other things make this I’tikaaf very successful. However, the most effective thing in this Annual Spiritual event is the Presence of HUZOOR SHAYKH UL ISLAM Dr. MUHAMMAD TAHIR UL QADRI. There is no doubt that his presence and spiritual company, through his lectures and advices, talks and chats, one has a better chance of attaining the spiritual connection with Allah Almighty and His beloved Rasool (PBUH). 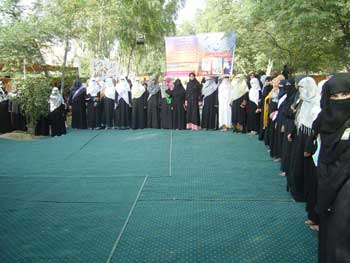 So this 4th day of I’tikaaf began according to the set format, that is Tahajjud, Salaat us Tasbeeh, Training Halaqa jaat, Collective Mehfil e Naat, Sehri and Aftari and all other meetings. However the 4th day then became so much beautiful because of Shaykh ul Islam’s visit at women I’tikaaf Camp. 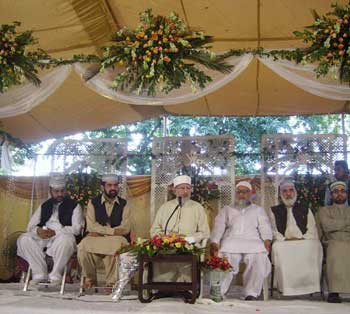 Special arrangements had been made since the morning to welcome him in a manner befitting his status. The program began immediately after the arrival of Huzoor Shaykh ul Islam. After recitation of verses from the Holy Qur’an, sisters from Jehlum presented a very beautiful inspiring nasheed for the Beloved Prophet (PBUH).

After that Hazoor Shaykh ul Islam presented gifts in the form of scarves to all of the female doctors sisters who had been providing their invaluable services voluntarily during the I’tikaf for twenty four hours at a time.

After this, he gave a special talk for all of the sisters present. He first of all appreciated all of the Women League Sisters and the other workers for their extremely hard work and efforts to serve the guests of Allah during these special ten days of I’tikaaf. 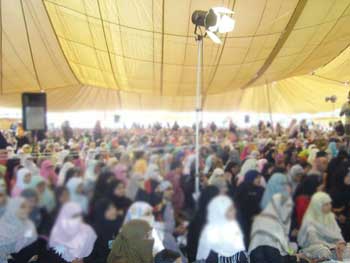 He mentioned how all of the sister’s had left the comforts of their homes to attend the I’tikaf and under the auspices of Minhaj-ul-Qur’an every effort had been made by the Women League to make them feel comfortable here in the I’tikaf camp which is not a small feat considering the thousands of sister’s involved.

Moreover he then said that all the sisters should try to attain and to adopt the true values of Islam, and in order to achieve this we should practice our lives according to the Sunnah of Sayyada Fatima (RA). Hazoor Shaykh-ul-Islam said that we should no longer blindly follow the models presented to us by media since we have models of perfection Islam. One of the biggest factors in leading people away from the true path of Islam is the current obsession in watching Indian and Pakistani films and drama’s. These present life in an unrealistic and idealistic manner, corrupting the morals of the youth who attain to reach the superficial goals set by movie stars and pop idols. 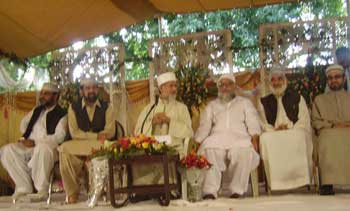 He mentioned how homes were being destroyed by the lack of true Islamic awareness and understanding. The youth of today are obsessed with materialistic goals and have left any kind of emotion and feelings for their fellow mankind. People are suffering from poverty and hardship in this world, but as the rich grow richer the poor are getting even poorer.

Hazoor Shakh-ul-Islam asked the sisters to use this camp as a spiritual wake up call. That that they should remember the true ideals of Islam and practice them in their own lives. In every form and manner, the sisters should become the living embodiment of Islam. They should first adopt the proper Islamic dress of Hijab and Abayah’s but at the same type adopt modesty and piety in their behavior too. He then encouraged the sister’s to help those in need around them when they return back to their homes. That they should try and spread the true message of Islam, of peace and harmony for all and also try and provide for the welfare of those less fortunate than them. 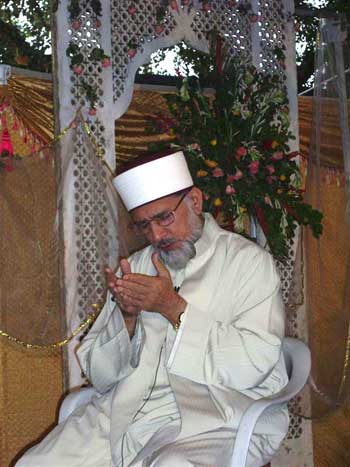 He concluded his short talk by appealing to the sister’s not to forget the spiritual benefits that they have gained from their I’tkaf. That they should try and continue their Ibadah and worship as much as possible and most of all always try and help those around them.

Before leaving Hazoor Shaykh-ul-Islam led the Asr prayers for the sisters and then departed back to the brothers camp.

The sister’s were greatly motivated by this personal tour of Hazoor Shaykh-ul-Islam. Many of the sisters present had never had the opportunity to meet him personally and were quite overwhelmed with his presence.

After his departure there meetings were conducted throughout the whole day with the students of the camp held by Rabia Urooj Malik and Perveen Mustafwi. Sister Sumera Khalqi and Razia Shaheen met with the Women league sisters from Fateh Jhang, karma, Wahcannt, Hazroo, Peshawar, Haripur to discuss their delegations experience of I’tikaf this year and resolve any issues that were outstanding.