LAHORE: [09-Dec-2014] The Pakistan Awami Tehreek on Tuesday announced countrywide protest for December 17 to mark the completion of six months of the Model Town incident. On the day rallies, protest demonstrations will be taken out.

According to a statement issued by the PAT secretariat in Lahore the investigation have not started according to the Model Town incident FIR and the government-sponsored Joint Investigation Team is not acceptable to PAT and these issues will also be protested on the day. The statement said that the hiding of the judicial commission report is in fact a confession of the crime by the Punjab Chief Minister. The statement further said that each drop of blood of the Model Town martyrs will be held accountable and the rulers will have to answer.

The statement said that all the allied parties have been invited to join the protest day and the future line of action of PAT will also be announced on the day. The statement said that this was decided in a high level meeting held on the instructions of the chairman Dr. Tahirul Qadri. The meeting was chaired by senior leader Sheikh Zahid Fayyaz and was attended by all the regional presidents and general secretaries. PAT leaders from Sindh, Balochistan, Khyber Pakhtoonkhawa, Gilgit-Baltistan, Kashmir and Punjab attended the meeting and endorsed the decision to hold December 17 as Protest Day. The meeting prayed for the health of party leader Dr. Tahirul Qadri and prayed for his quick recovery. The meeting also prayed for the martyrs of Model Town.

Secretary General of PAT Khurram Nawaz Gandapur said that the rulers have chosen the path of violence and proof of that was the violence on Pakistan Tehreek-e-Insaf workers in Faisalabad. He said PAT was part of the mourning day held by PTI and we are of the view that the government is blocking the way of peaceful protests and thus inflicting huge losses to the country. He said justice is being stabbed in the name of JIT and the government has walked away from all the commitments it had made with us. He said we had agreed to the name of a police officer from Sindh but after two days the government refused to entertain its own decision saying that the prime minister was not satisfied with that police officer’s name being included in the JIT. He said after that the government made not contact with PAT and formed the JIT on its own without consulting PAT or the families of the Model Town martyrs.

Khurram Nawaz Gandapur said that the government has been given enough time and our patience level has reached its height and we will hold protest demonstrations on December 17 all over the country. He said all our allies will join us as the whole nation is united on the Model Town incident and the Punjab Chief Minister is responsible for it and the proof is the judicial commission report. 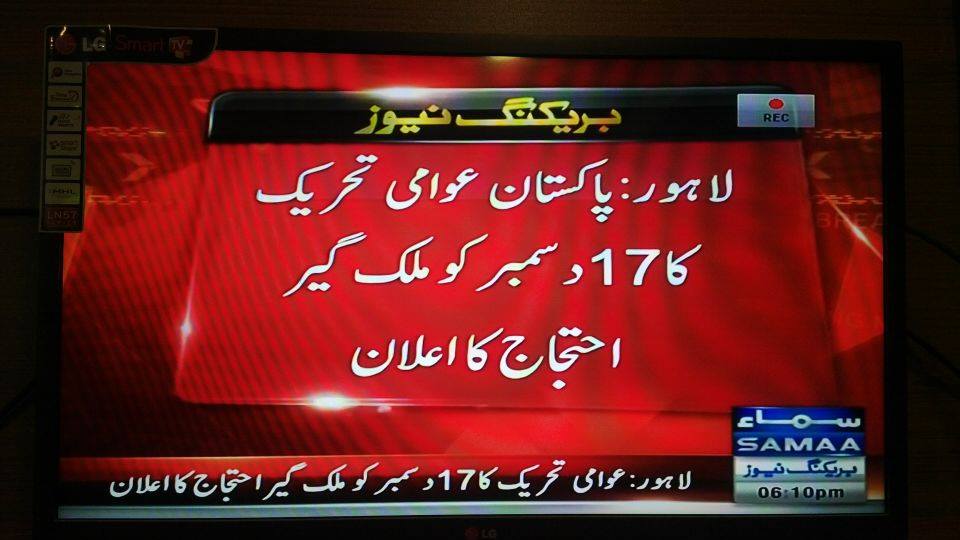