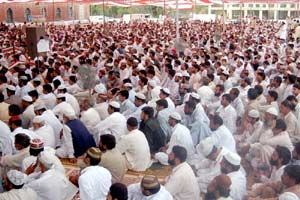 A Members Convention was held by Minhaj-ul-Quran International Pakistan at Jami Minhaj, Baghdad Town Lahore. It was held in light of the great success of the 22nd Annual International Mawlid Conference held at Minare Pakistan Lahore and also to set the future plan of action after such a great success.

The convention was attended by senior representatives of all MQI local branches in Pakistan. The large mosque hall turned out to be too small to hold the convention as the turnout was several thousands, so it was held in the grounds of the mosque. 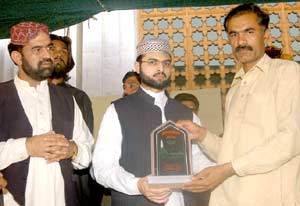 The speakers at the convention made it clear to members that although the 22nd Annual International Mawlid Conference was one of the greatest accomplishments of MQI, we must now build upon that and capitalise on it. They said that we must continue our work in the same spirit while Shaykh-ul-Islam Prof. Dr. Muhammad Tahir-ul-Qadri is abroad for a long period of time for treatment. Their speeches boosted the morale and spirits of the convention, if at all there was a need to boost them after the great success of the 22nd Annual International Mawlid Conference.

An awards ceremony was also held for MQI local branches for their extra ordinary efforts for the 22nd Annual International Mawlid Conference. Sheikh Zahid Fayyaz, Naib Nazim-e-A'ala MQI conducted the awards ceremony. While addressing the convention he said that we must show the same resolve and commitment that was evident for the 22nd Annual International Mawlid Conference, all year round. He said that although he chaired the central Mawlid Conference Committee, the leadership and optimum support that he received from Nazim A'ala Dr Raheeq Ahmad Abbasi, was the main contributory factor for our success and that Nazim A'ala Dr Raheeq Ahmad Abbasi is truly entitled to receive all the credit for the success. He concluded that Shaykh-ul-Islam was not only the leader of Minhaj-ul-Quran International (MQI) but was the leader of the Pakistani people and the Ummah at large. He said it is thus our duty to convey to the public as to who Shaykh-ul-Islam is and what are his achievements, aims and objectives. 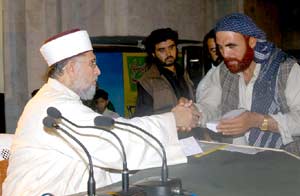 Survivors of the October 2005 earth quake were specially invited to the program in order to hand over cash aid to them. Director Minhaj Welfare Foundation (MWF), Sheikh Zahid Fayyaz and the former director of MWF, Sajid Bhatti conducted the session. Shaykh-ul-Islam handed over cheques to those who had been able to come. For those who were unable to come, there will be further programs held in the earth quake zone to hand over cash aid to them. 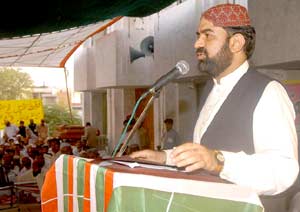 The first of the key addresses to the convention was by Dr Raheeq Ahmad Abbasi, Nazim A'ala Minhaj-ul-Quran International (MQI). His talk proved the success of MQI in various categories by presenting historical facts. He proved that there was no doubt that the achievements of MQI and its leader were unmatched and he challenged anyone to prove him otherwise. He gave a detailed briefing on the achievements of the books authored by Shaykh-ul-Islam. He directed attention to numerous books written by Shaykh-ul-Islam which are unique and have not been written by anyone else through out Islamic history.

Since the appointment of Dr Raheeq Ahmad Abbasi as Nazim A'ala in 2003 by Shaykh-ul-Islam, he and his team have taken over 95% of the burden from Shaykh-ul-Islam in the running of day to day affairs of the mission all over the world. This gave Shaykh-ul-Islam the time he needed to complete his translation of the Holy Quran, Irfan-ul-Quran. Many other gems have been authored by Shaykh-ul-Islam during this period as he could spend all the time he needed and did not have the tension of dealing with thousands of missionary matters on a daily basis. Dr Raheeq Ahmad Abbasi said that Shaykh-ul-Islam being a Mujaddid, his books are reviving the subjects which they deal with. He said that we need to show Shaykh-ul-Islam that he can devote all of his attention to writing his revolutionary books. First and foremost of which is Tafseer Minhaj-ul-Quran - the interpretation of the Holy Quran by Shaykh-ul-Islam. He will be working in parallel on Irfan-us-Sunnah which will be a 12 volume collection of traditions. This will fill the vacuum in the compilation of traditions according to the present era, which was a dire need of the ummah for over 800 years since when this great science had been neglected. Minhaj-us-Saviyy, a compilation of traditions consisting of one volume has already been compiled by Shaykh-ul-Islam, and this is the first such book after Riyad-us-Saliheen and Mishqat-ul-Misabeeh.

Dr Raheeq Ahmad Abbasi said that the success of the 22nd Annual International Mawlid Conference needs to be repeated a thousands time over, all over the country, in order to take the mission towards true success. He concluded by saying that the whole aim of Shaykh-ul-Islam was to see a smile on the face of the Holy Prophet Muhammad SAW with the Prophet SAW being happy by our efforts for Islam; so if we want to make The Prophet SAW happy then we should strive to make Shaykh-ul-Islam happy by working so hard and taking the mission towards success. 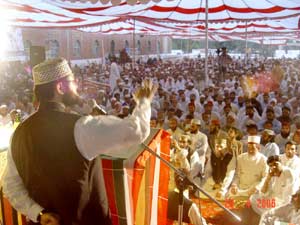 Hassan Mohi-ud-Din Qadri said that if mujaddis have the attributes of the prophet SAW then we the followers of Shaykh-ul-Islam - the mujaddid of the present century and many centuries to come- should also be like the companions of the Holy Prophet SAW. He said that the companions worked relentlessly whether they were with the prophet SAW or whether they were far away from him. He said the Prophet SAW had given the companions a mission for which they worked for no matter where they were or in what circumstance they were in; they just had a one track mind to work for their given mission; this was the purpose of their lives. In the same way, we, the followers of Shaykh-ul-Islam must work relentlessly whether he is with us or he is abroad. He said Shaykh-ul-Islam has given us a mission and we all know what our individual roles are in that mission; this should be the only purpose of our lives. He said we must work so hard that when ever Shaykh-ul-Islam returns to Pakistan, he can see clearly see a visible difference in the state of the mission due to the dawah being carried out by all of us. 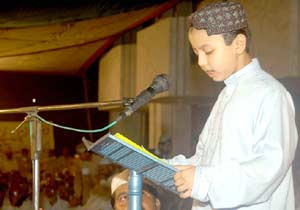 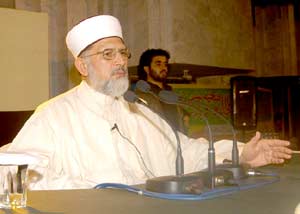 Shaykh-ul-Islam Prof. Dr. Muhammad Tahir-ul-Qadri, Founding Leader Minhaj-ul-Quran International (MQI) addressed the convention. He said that he will only give a brief talk as all the major points have been covered in detail by previous speakers. Firstly Shaykh-ul-Islam, referring to the speech by Hammad Mustafa Qadri al-Madani, said that he was able to do a speech in front of such a large gathering because of the way he was brought up. He said that he is just another 7 year old, like your children, so if he can do this then there is no reason why your children cannot be like this. He said you should bring your children to programs such as these so they realise what MQI is and become conscious of it at an early age. He said the next time I see you, I want to see your children be sitting next to you.

Shaykh-ul-Islam made it clear to the participants of the MQI members convention that the mission is moving forward at a fast pace and the 22nd Annual International Mawlid Conference was a great milestone on our journey towards success. He said that there is no doubt that the impression that the public has of MQI is certainly much better than that of other parties and organisations. He said that my resignation from the National Assembly of Pakistan paid a great role in this. He said that the translation of the Holy Quran - Irfan-ul-Quran - will also create a great positive impression of the mission as it will serve the masses and give them true guidance of the Holy Quran. He said that these and many other steps will eventually have the effect of winning the hearts and minds of the Pakistani nation. 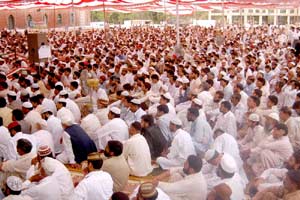 He said that I only have one piece of advice for you and that is to follow the dawah strategy of the mission that was set in the last meeting of the shurah. That is to convey the message of the mission to public through the lectures of Shaykh-ul-Islam. Shaykh-ul-Islam said that it is the duty of every one of you to make sure that DVDs, CDs, video/Audio cassettes of his lectures are given door to door, if you really want to be successful in conveying the message of the mission to the Pakistani people. He said this is the only mode of success, nothing more nothing less. He said every mode other than this is only philosophy, theories and has nothing to do with achieving our goals.

The convention was concluded by the Isha prayer.