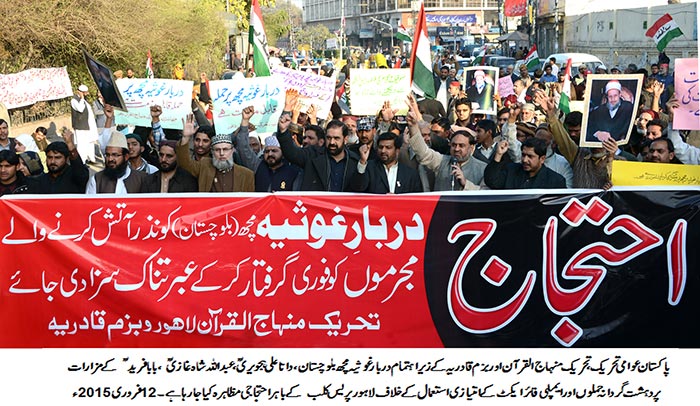 The demonstration was taken out under the banner of Pakistan Awami Tehreek and Minhaj-ul-Quran International in front of Lahore Press Club to protest increasing incidence of attacks on the shrines of the saints, selective and discriminatory use of Amplifier Act and terrorists’ attack on convent of Syedna Tahir Alauddin al-Gilani in Balochistan. The hundreds of workers attended the demonstration.

Addressing the participants of the demonstration, PAT President Dr Raheeq Ahmad Abbasi said that the government is taking action against speakers and Imams of Mosques and shrines of the saints according to a carefully calibrated plan and the Police is giving the impression at the behest of the government that these actions are being taken on the orders of the military. He said that we appeal to the military leadership to keep an eye on the government in this regard and play its role in getting the government action stopped against religious scholars and Imam who are busy in fighting terrorism at intellectual level. He said that such actions are creating provocation among the people with the potential to affect the National Action Plan against terrorism.

The PAT President demanded of the federal and Balochistan governments to immediately arrest those terrorists who carried out attack on the convent of Syedna Tahir Alauddin Al-Gilani, adding that those who attacked the shrines of Data Gunj Baksh Ali Hajveri (RA), Abdullah Shah Ghazi (RA) and Baba Farid Gunj Shaker (RA) should be brought to justice without any further delay. PAT leaders Ch. Afzal Gujjar, Hafiz Ghulam Farid, Shahzad Rasool, Malik Habib and others also spoke on the occasion.

In addition to representatives of various religious and political parties including Bazm-e-Qadriya, religious scholars and Mashaykh attended the demonstration. Addressing the participants, President of PAT Lahore Ch. Afzal Gujjar said that we strongly condemn the terrorist attack on the shrine of Hazoor Quadva-tul-Aulia in Balochistan and he said if any more attack was carried out on the shrine of any saint, the government will be held responsible for it. He said that convents and shrines of the saints, which have been the source of promoting peace and brotherhood, are continuously target of terrorism during the PML-N regime and the government has failed to provide security to the shrines. He said that those shrines, convents and Mosques that raise voice against terrorism and extremism are being targeted by making discriminatory use of Amplifier Act. He said that action is being taken against those religious scholars who are already against terrorism. He said that the rulers are trying to thwart National Action Plan through such activities.

In his speech, Hafiz Ghulam Farid said that the shrines of Syed Ali Hajveri (RA), Baba Farid (RA), Abdullah Shah Ghazi (RA), schools, Imambargahs, hospitals, Mosques, and religious scholars have been targeted during the rule of present rulers but no terrorist was apprehended. He said that the rulers implemented the agenda of terrorists by shedding blood of innocent people in Model Town. He demanded of the government to ensure fool-proof security of the shrines and those who attacked the convent of Hazoor Qudva-tul-Auliya (RA) should be apprehended forthwith and given exemplary punishment. Shahzad Rasool also spoke on the occasion.

Demonstration against terrorist attack at Darbar e Ghausia Much. pic.twitter.com/WloVgOrTBD 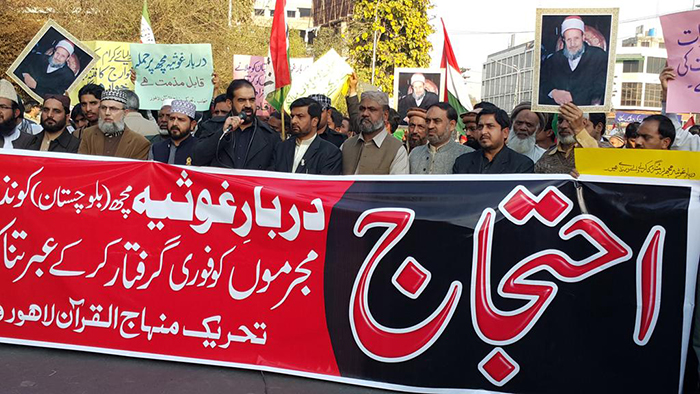 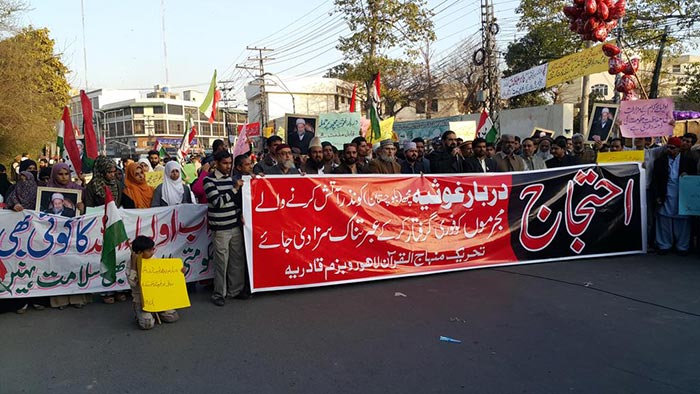