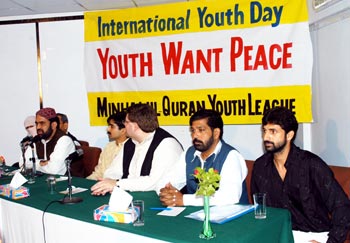 Dr. Raheeq Ahmad Abbassi congratulated Minhaj-ul-Quran Youth League for organizing such a beautiful seminar on debatable and important issue what the youth of the day want.

He said that the world in which we live is our common home and beautiful with cultural diversity. He said, we share this home and our generations would also be here in the same abode so we should make this home more and more comfortable and an ideal abode for them. We can do this only if we come forward to promote and enhance peace, harmony and tolerance shedding off all the racial, regional, national and religious prejudice. We need to adopt an unbiased attitude towards adherents of the all other religions. 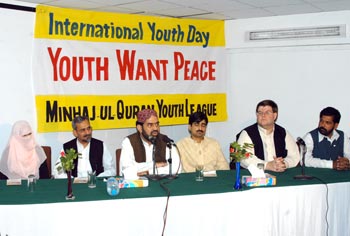 He also pointed out in his speech that the major leaders should think before they speak at public gatherings and facing the press because their words damage the world cause and prove an obstacle in the way of peace and prosperity.

He condemned the remarks forward by Obama and other presidential candidates about naked aggression in Pakistan and the sacred places of the Muslims. He said such statements make the Muslims realize that America is against not terrorism but the Muslims.

He also said that it is more than unfortunate that no efforts were made to understand the Muslims on International level. Islam is the religion of peace that advocates the rights of everyone whether he is Muslim or non-Muslim. He said we can promote and speeds up the process by bringing the Muslims of the west and from east closer to each other.

Nazim-e-Aala said, the terrorists do not belong to any creed or religion and it is unfortunate to associate it with Islam. He said the western should come forward to stay with the Muslims, the second largest religion in the world and there is not any other alternate to it. He said that we should dissolve the outstanding issue through negotiation and on tables rather transgression and aggression. 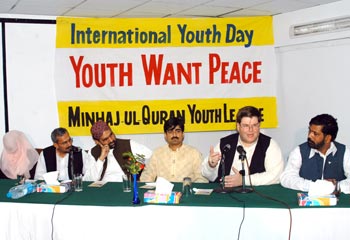 He also said that we take serious step to promote justice in the world, eliminating the existing gap between the elite and the poor, educating people for better and promising future would help us to achieve our goal with a short span of time.

Principal Officer to American Consulate Lahore, Mr. Hunt said in his speech that he is really happy with the efforts made by Minhaj-ul-Quran Youth League on the day to discuss the important issue. He said today the whole world faces threat from terrorists he said we can address this issue by giving employment opportunities to the youngsters so that they may not fall into bad hands, through democracy and mutual understanding. He said we need to strengthen constitutions and law enforcing agencies. He also appreciated the efforts made by Dr. Tahir-ul-Qadri round the globe. He said we need understand all the noble teachings of all the religions. He also said that Islam is a religion of peace and it is not fair to associate terrorism with the Muslims. 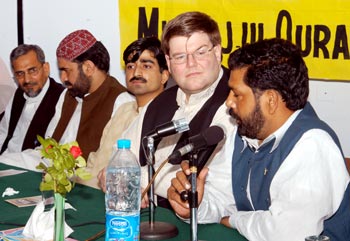 Sajid Mahmood Bhatti said in his speech that after two days we are going to celebrate the independence day of Pakistan and as the youth played a vital role and stood by Quaid-e-Azam Muhammad Ali Jinnah to attain Independence. The present time demands the same spirit from youth because it is they who care our future. He said that we need to define terrorism. We can not promote peace in the world until we bring the deprived people out of their despair and disappointment. He also said that we should adopt democratic attitude, tolerance, love and affection. He said we should respect the beliefs, thoughts values of all others and make this world a heaven on earth.

Bilal Mustafvi said that today youth 23% of Pakistan Population comprises on youth and it is really sad to see that the youth is chained by poverty and they are living below the line of poverty. He said we should create job opportunities for the youth, train them for the days to come. Minhaj-ul-Quran Youth League is really striving hard for that holy cause.

Ex- Skipper of Pakistan Hockey Team and world class player Muhammad Saqlain, Summaira Rafaqat, Zaheer Abbass Gujjar also spoke to the gatherings, congratulated and thanked them for their participation and the seminar ended with the prayer for world peace and prosperity. 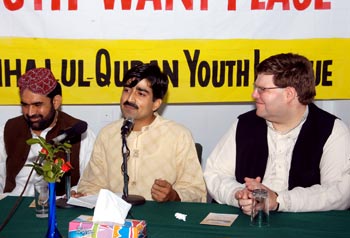 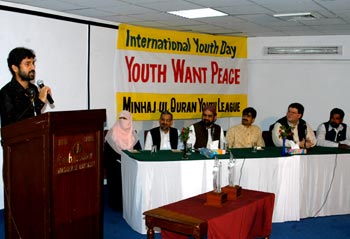 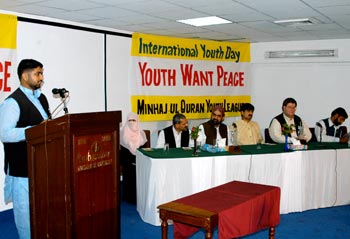 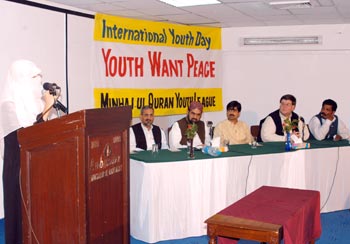 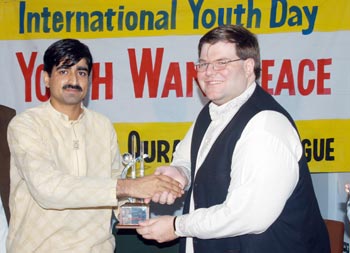 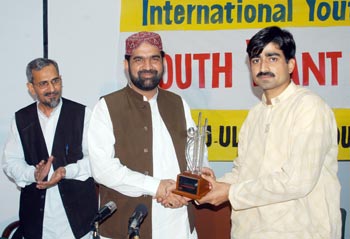