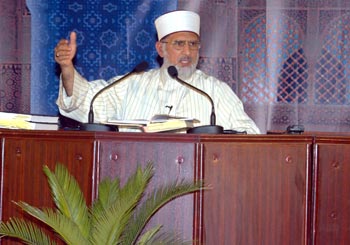 Along with the other routine activities, the most important thing on the 4th day was the Nikah ceremony of four couples that was read in the company of Shaykh-ul-Islam. Mufti Abdul Qayyum Hazarvi and Allama Muhammad Azad recited the Nikah speech and lead the other concerns.

Shaykh-ul-Islam told the couples that their marriage was based on totally Tehreeki and Islamic spirit and they must keep that thing in their mind in their proceeding life.

After Asr prayer, Mufti Abdul Qayyum Hazarvi shed light on different issues about Islamic jurisprudence and answered all the questions the people asked him. 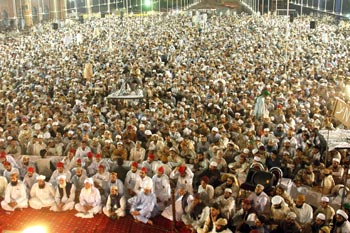 A young Christian boy embraced Islam in the same gathering. Mufti Abdul Qayyum led the boy to read the first Kalima. He was given the new Islamic name "Muhammad Raza". Mufti Sahib urged the young man to establish Salat, Soum and other obligatory actions in his life and avoid all the things prohibited in Islam. Muhammad Raza promised before the people that he would try his level most to lead his coming life observing the noble teachings of Islam. Thousands of people attending the gathering congratulated him and helped him monetarily.

After Asr prayer, they arrange a sitting with Shaykh-ul-Islam for districts presidents, vice presidents and leading figures of all the circles and blocks of muatakifeen. Shaykh-ul-Islam lauded their endeavors for the mission of Aqa (SAW). He said the way they were working with full enthusiasm was highly recommendable. He said his head was high with their untiring works. He also urged them to double their pace and give maximum time to get their objectives. He said if they continue to work with same spirit and passion, the dawn of Mustafvi Revolution will kiss their feet very soon. 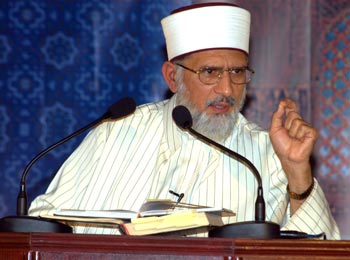 After Isha prayer, Shaykh-ul-Islam shed light on the life and teachings of great Sufi, Hazrat Ibrahim bin Adham. He said, he holds a great status among Mohaditheen. He told the audience that there is a misunderstanding among the common Muslims, and the refuters of spiritualism that the great Sufis were not knowledgeable personalities. He said it is very unfortunate, that Islamic Scholars did not pay their head towards that subject in the past thirteen centuries. He said, by the grace of Almighty Allah and with the special affection of Aqa (SAW), he has completed that task that will be soon published and available in the market.

He also shed light how to attain purification and refinement of soul in the light of the teachings of Hazrat Ibrahim bin Adham.

After the speech, some of the people left for their places to rest and other remained busy in adoration, Zikr, Nawafils and recitations of the Holy Quran till Sahri. 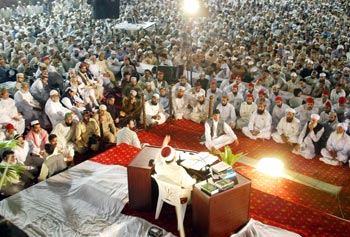