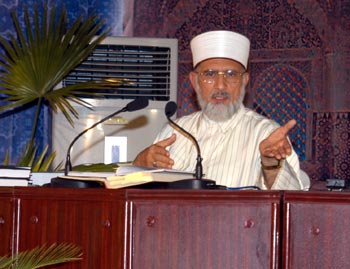 The 5th wonderful and jubilant day of holy Itikaf gathering started with the same full enthusiasm by the supreme blessings of God and special favour of the holy Prophet (SAW). After Fajr prayer, the Muatakifeen continued to sit in their lines keeping themselves busy in Individual Zikr and tasbihaat till dawn prayer. The atmosphere appears to be more soothing and blissful than ever before. It seemed as if angels had come down to earth and busy to strengthen their relation with their Lord and seeking the glee of Him.

After Zuhr prayer, Qari Muhammad Saeed Raza Bughdadi delivered a lecture on Iraf-ul-Quran. In his lecture, he teaches the Muatakifeen the Quranic phonetics and recitation with proper accent. His book on Tajveed, Irfan-ul-Tajveed is also bringing a huge popularity for him. Minhaj-ul-Quran International has started a noble mission of Quran understanding and all minhajians are doing a lot and highly recommendable working this regard. 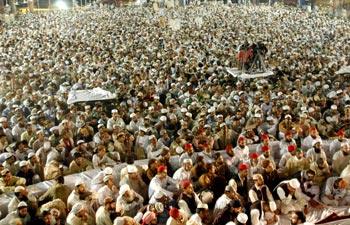 The most notable thing of the 5th day was the Aftar dinner of big figures from different walks of life with Shaykh-ul-Islam. Honourable guests started to arrive in Itikaf City after Asr prayer. Shaykh-ul-Islam came to have Aftar with the guests at 5:22. All the guests have been on their seats before his arrival. Shaykh-ul-Islam accorded a warm welcome to the guests, went to them and shook hand with them warmly and exchanged well wishes to one another. Here are the names of respected guests: 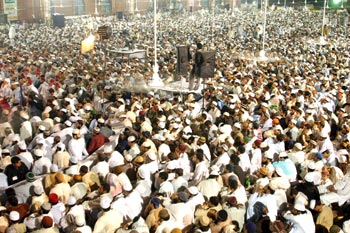 After Evening prayer, Dr. Raheeq Ahmad Abassi led the guests to the courtyard of the mosque on the command of Shaykh-ul-Islam. Before thousands of Muatakifeen, Khawja Junaid announced his joining Minhaj-ul-Quran International. He said, he is extremely happy to become the member of Minhaj-ul-Quran International. He said, he loves Shaykh-ul-Islam because he is the true lover of the Holy Prophet (SAW). He said there is a tough match between the forces of evil and goodness; he congratulated the Muatakifeen for becoming the part of the forces of goodness. He expressed his hope and belief that at last, the latter would be the ultimate winner. Mian Afzal Hayyat, the ex- C M of Punjab also got life membership of Minhaj-ul-Quran International. 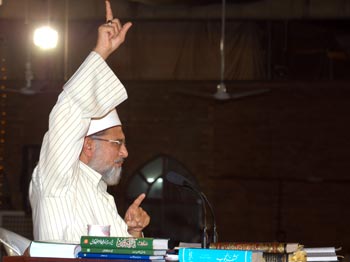 Dr. Raheeq Ahmad Abbassi thanked Khawja Junaid and Afazal Hayyat for joining the mission of the Aqa (SAW), presented gifts of Irfan-ul-Quran (translation done by Shaykh-ul-Islam) and saw them off.

Before Shaykh-ul-Islam's speech, a resolution was forward for Mawlid Conference 2008. All the muatakifen took part in it and cast their vote. At last, it was decided that in 2008, Minhaj-ul-Quran International would hold Mawlid Confernces in Rawalpindi, Faisalabad Lahore and Karachi instead of holding only one big conference as last years Minhaj-ul-Quran International had to face space problem due to large number of attendants. Thousands of people had to go back because Iqbal Park, Minar-e-Paksiatn had already been filled when they reached the venue. Shaykh-ul-Islam will chair in Lahore and Hassan and Hussain Mohy ud Din Qadri would represent Shaykh-ul-Islam in other cities. Shaykh-ul-Islam delivered a short speech after that Mehfil-e-Qir'rat started and ended early in the morning before Sahri.