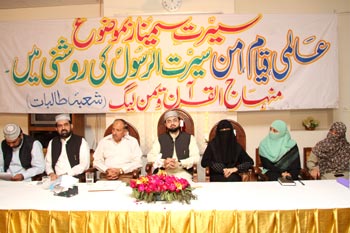 A seminar on the topic of "Establishment of peace in the light of Sira of the Holy Prophet (saw)" was organized by Minhaj-ul-Quran Women League (Students Wing) in the Danish Hall of the central secretariat of Minhaj-ul-Quran International. Central Amir Minhaj ul Quran International Miskin Faiz-ur-Rehman Durrani presided over the seminar. A resolution was passed in the seminar unanimously in which the rulers of the Islamic countries were urged to adopt the Sira of the Holy Prophet (saw) as their ideal and not to follow west. The resolution said that peace could be established comprehensively by following in the footprints of the Prophet of Islam (saw).

Addressing the audience, the son of Shaykh-ul-Islam Dr Muhammad Tahir-ul-Qadri, Sahibzada Hassan Mohi-ud-Din Qadri said that even a Jew who attended the company of the Prophet (saw) during his physical life, did not remain deprived of the mercy. The relationship with the Holy Prophet (saw) would have to be made stronger by following his teachings with a view to establishing peace today. He said it is due to the Prophetic blessings that this universe is holding itself together. Minhaj-ul-Quran International is spreading the awareness of the need for strong connection with the Holy Prophet (saw). Today the Muslim Umma and the whole humanity are in need of love, harmony and peaceful mutual coexistence. Peace will be established only when these positive values will spread. 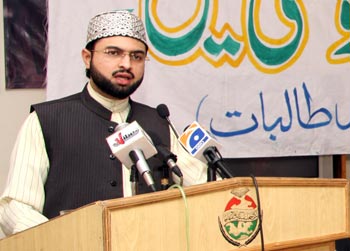 Speaking at the seminar Qura-tul-Ain Ayesha said that the Umma's present state of affairs was due to blind following of the West with the result that the Mosques have been turned into battle fields for warring sects and the Umma has been robbed of its dignity. Those whom the Muslims were following do not even consider the former as human beings. The worst type of terrorism is being committed in the name of establishment of peace today. The champions of human rights and freedom of expression are blaspheming against the Holy Prophet (saw). She said Minhaj-ul-Quran International is working for the solidification of the relationship with the Holy Prophet (saw) so that the Muslims should be able to regain peace and happiness in their lives. 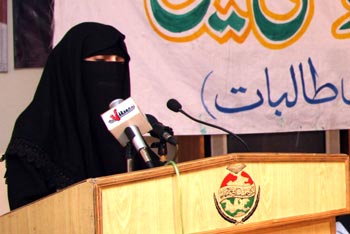 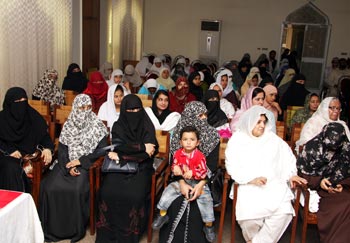 Central Amir Minhaj ul Quran International Miskin Faiz-ur-Rehman Durrani said that the best way to strengthen the relationship with the holy Prophet (saw) was to offer Durood and greetings on his person. It is the characteristic of Durood that it provides peace and harmony by eliminating discord and mischief. The heart, which is filled with the love of the Holy Prophet (saw) does not undergo heart attack. He said lost glory of Umma could be regained by adopting the teachings of the Holy Prophet (saw) in our lives. The Holy Prophet (saw) is the Prophet of mercy for the whole mankind and latter can establish peace by acting upon his teachings. Nazim-e-Ala Dr Raheeq Ahmad Abbasi, Sheikh Zahid Fayyaz, Ms Farah Naz, Rabia Urooj and Brig (r) Iqbal Ahmad Khan also addressed the seminar. A speech competition was held on the said topic among the students of various colleges and universities of Lahore in which Farah Faiz of Quaid-e-Azam Law College, Mina Faiz of Govt. College University and Saira of Minhaj Degree College for Women got first, second and third position respectively. 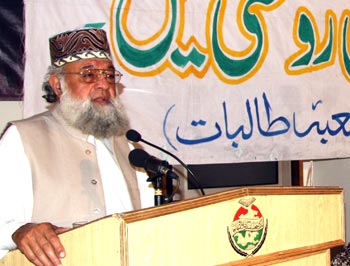 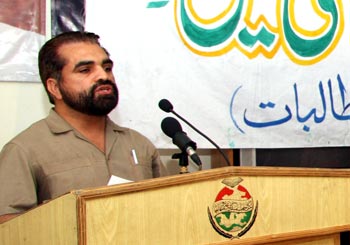 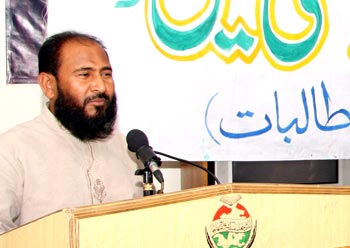 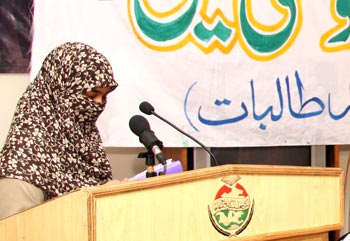 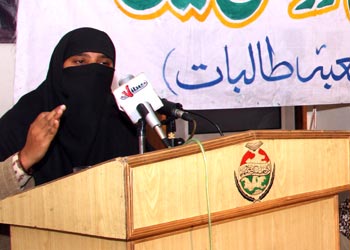 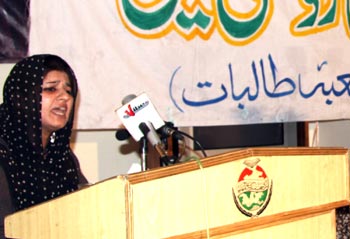 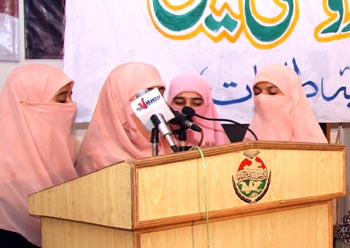 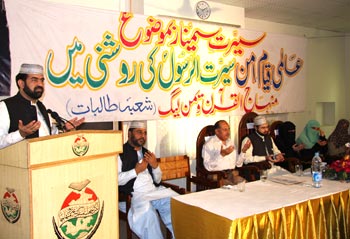 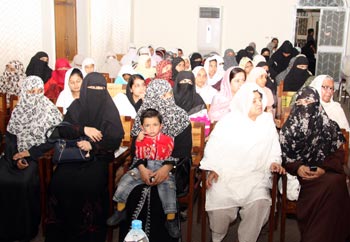