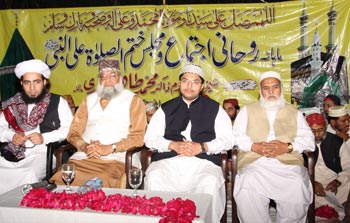 The monthly spiritual gathering of Gosha-e-Durood was organized in the ground in front of the Central Secretariat of Minhaj-ul-Quran International on April 3, 2008 after Isha prayers. Miskin Faiz-ur-Rahman Durrani was in the chair, while Sahibzada Hussain Mohi-ud-Din Qadri was the special guest. Sajjad-a-Nasheen Ajmer Sharif Bilal Ahmad Chishti, Sajjad-a-Nasheen Data Sahib Mian Muhammad Ijaz and Sahibzada Muhammad Shahzad Saifi Mujaddadi of Silsila Safia Pakistan were the guests of honour.

The proceedings of the programme started with the recitation from the Holy Quran by Qari Allah Bakhsh Naqshbandi followed by Naat, which was presented by Muhammad Anser Qadri of COSIS, Minhaj Naat Council, Sarwar Saddique and Shakeel Ahmad Tahir. 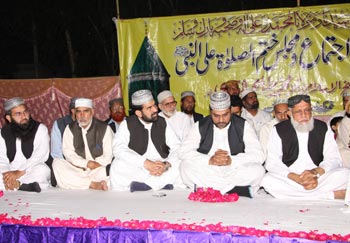 At 10 p.m., the speech of Sahibzada Hussain Mohi-ud-Din Qadri started. The topic of his speech was 'Dignity of Aulia Allah'. He said when Allah chooses His servants for the service of His religion; it signifies a great mercy upon them. Aulia Allah are the blessed people who experience Divine love. When Allah's Mercy is showered upon His Servants in abundance, it is transformed into love of Allah. This is the love which Allah Almighty has for His Servants. He expresses this love by endowing upon His chosen Servants nearness to His Beloved Prophet (saw). This is His special favour, which is showered only upon the chosen few. The question arises here: does Allah grant nearness to every one of His Subjects. The answer is in the negative, for this special status is reserved for those who love His beloved Prophet (saw). 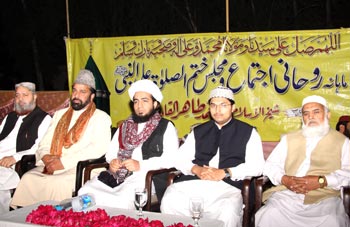 On the other hand, Allah Almighty made this world the ultimate destination of such a people who devoted himself to the worldly love. Such people cannot achieve nearness to Allah and His Prophet (saw). And the reason for this is their obsession with matters worldly. This world is mortal and temporary arrangement which they misunderstood to be permanent. Allah Almighty says in the Holy Quran:

This cleanliness represents riddance from the love of wealth, greed and lust for material goods for the solidarity of faith. Allah, thus, loves all those people who become pious after attaining to complete cleanliness. He showers His blessings upon them as His chosen people. He said piety adds to purification and cleanliness of man and this is a stage where the shower of Divine blessings is the maximum and dependence upon and trust in Allah only becomes the chief objective of life of a believer. Allah's love becomes the source of nearness to Him. He says in the Holy Quran: 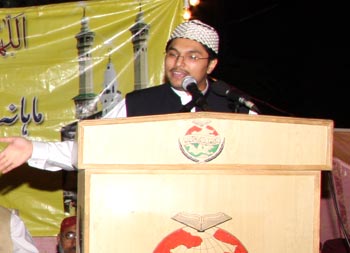 Trust in Him becomes the part of faith and life of a believer. A time then comes when one is ready to surrender ones life but does not wait for any miracle to happen, such is the level of trust in Allah Almighty. On the other hand, their status is such that if they stamp their foot on earth, it would cause the emergence of fountains. They get such a high status that they achieve eternity till the Day of Judgment.

Speaking about the blessings of Allah, Sahibzada Hussain Mohi-ud-Din Qadri said that the one who would cross five stages would embrace the Divine blessings. According to Imam Hassan Basri, Allah Almighty is Master of hundred blessings. When He divided it into parts, He kept 99 parts to Himself but gave away 1 part to the entire world. It includes the worldly love, love for parents, teachers, children, wealth and relatives etc. Allah Almighty would show his 99 blessings for His Subjects on the Day of Judgment. By intercession is meant that the saints would intercede for other people and take 70-70 thousand people into paradise along with them. This is the status which Allah will confer on His chosen people on the Day of Reckoning in the form of blessings. 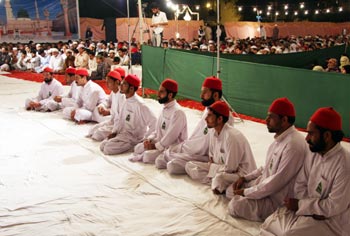 Whatever Allah Almighty created in this universe is part of His blessings. The only purpose of creating it was that there should be nothing without purpose in this world. Therefore when one cannot achieve nearness to such people, one should show ones association with them. Our salvation lies through people who love Allah. Punishment and reward owe itself to only such people on the Last Day. He referred to the following verse:

Allah Almighty has given us a formula to attain His love i.e. If one wants to achieve nearness to Him, one should do favours upon people. Those who would do favour, the blessings of love will be doled out through them.

After the conclusion of his speech, Amir-e-Punjab Ahmad Nawaz Anjum told the participants that the number of Durood offered during the current month stood at 28 corers, 76 lacs, 86 thousands and 913.

At the conclusion of the programme, Sahibzada Hussain Mohi-ud-Din Qadri gave the life membership certificate to Sajjad-e-Nasheen of Data Sahib and Sahibzada Muhammad Shahzad Mujadadi of Silsila Safia. Shamoun Asghar was given a shield on behalf of MQI due to excellent sponsorship in International Milad Conference. Durood-o-Salam was offered. The programme ended with the prayers led by Allama Muhammad Shahzad Mujadadi. Muhammad Waqas Qadri conducted the programme. 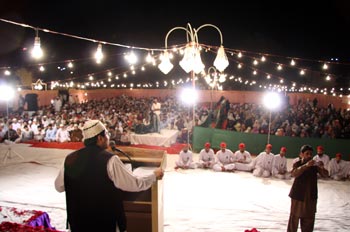 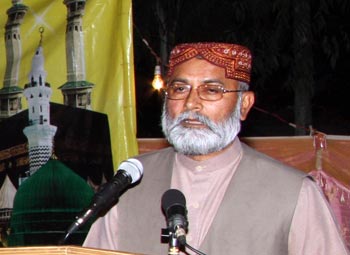 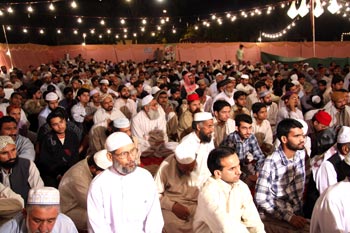 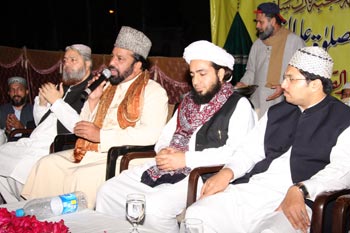 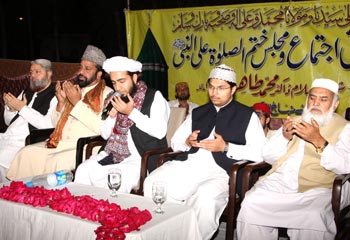 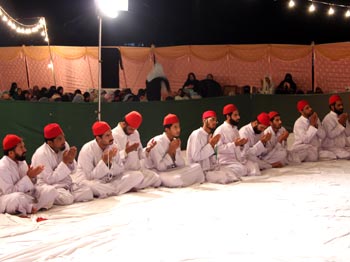 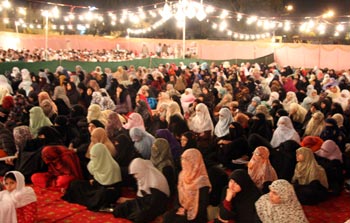 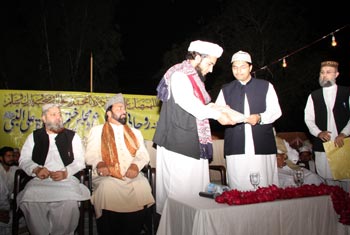 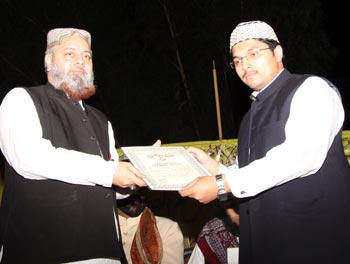 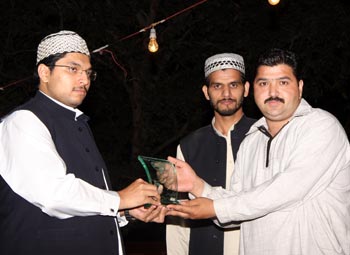