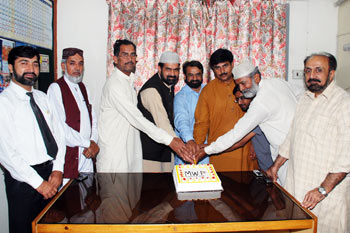 Addressing the programme, Nazim-e-Ala Dr Raheeq Ahmad Abbasi said MWF was performing the obligation of serving the suffering humanity since last 21 years. He said Shaykh-ul-Islam Dr Muhammad Tahir-ul-Qadri founded MWF 21 years ago for the service of poor masses, and social welfare. By grace of God, the circle of its operations has widened oversees during emergencies and natural calamities. He said Islam is a welfare-oriented religion and has put in place a system of welfare for the poor and the needy. It caters to the needs of every class and community. Islam is such a religion whose welfare system grants rights to animals, leave alone the human beings. If an animal goes hungry or thirsty in an Islamic state, its responsibility would fall on the shoulders of state. Islam is the most well wishing and sympathetic religion of the world in this regard.

He said Minhaj Welfare Foundation was engaged in the welfare activities for ailing and deserving humanity and we would continue this noble mission in the future. Other speakers also spoke at the occasion. All leaders cut the cake to conclude the ceremony.