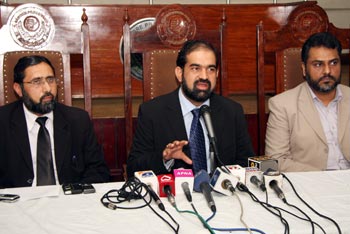 Addressing a press conference in the Lahore Press Club, Secretary General of Minhaj-ul-Quran International, Dr Raheeq Ahmad Abbasi, has declared that MQI will organize “National Peace Conference” on April 9, 2009, to consider ways and means to stem the ongoing terrorist wave that has even engulfed the law-enforcement agencies. Secretary General of Pakistan Awami Tehreek, Anwar Akhtar Advocate and naib Nazim-e-Ala Sheikh Zahid Fayyaz were also present at the occasion. He said Pakistan was confronted with internal and external terrorism. The law and order situation has deteriorated to such a low level that terrorists have now started to take government officials and law enforcing personnel hostage by forcibly occupying the official buildings. Robberies, thefts and killing of innocent people have become the order of the day. The monsters of price hike, inflation and unemployment have undermined the society internally. He said that unending drone attacks, violations of Pakistan’s territorial integrity and foreign patronage of terrorist elements inside the country all constituted worst from of terrorism Pakistan was exposed to. 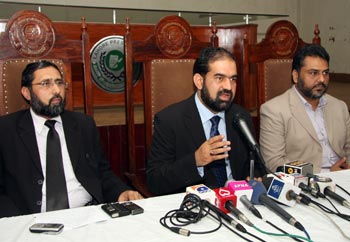 He said that there was a method to some foreign institutions’ madness of dubbing Pakistan as “an epicenter of terrorism”. The real target is to destroy the country’s atomic and military power by fanning sectarian, religious and linguistic differences. Therefore it is the responsibility of all religious and political leaders to put their heads together in such precarious circumstances and formulate a national course of action to thwart these conspiracies and establish peace. He said MQI was going to organize a National Peace Conference under the special directions of Shaykh-ul-Islam Dr Muhammad Tahir-ul-Qadri for national integrity, and solidarity. The leaders of religious and political parties, lawyers, students, traders’ organizations and prominent people from different walks of life will attend the Conference and formulate a national plan against terrorism. Secretary General of MQI said that everyone was worried due to unending bouts of terrorism and it was the biggest ever problem of the country, which had the potential of destabilizing her both politically and economically. This is due to this that foreign investment was not coming forth. “It is high time efforts were made to get rid of scourge of terrorism at individual and collective levels”, he concluded.