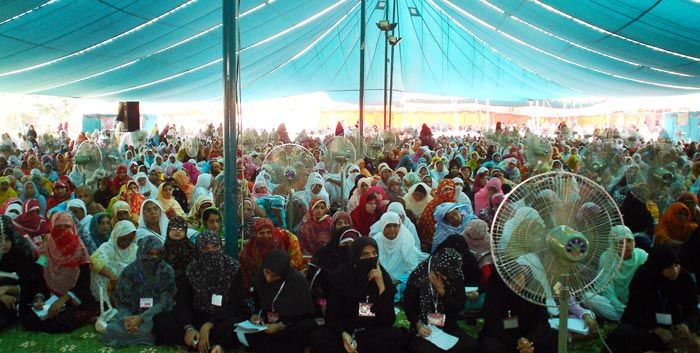 On 13 September, 2009 the Ramadan 22nd commenced with the recitation of the devotion of Durood-e-Pak, wakening up the‘mu’takifat’ for Tahajjud prayer. The members of the Salat Committee would chant the devotion charged with love for the Beloved Messenger of Allah (blessings and peace be upon him) and most politely ask the participants to rise and be with their Lord. The supplications to be made at the time of rising from sleep were being announced on the sound system. The ‘mu’takifat’ performed their Tahajjud prayer in the environment permeated with spiritual blessings.

Later, the Mess committee served Sahri food to the participants in their rooms. While they were taking food the manners and duas of eating according to the Prophetic Sunna were being announced. They were repeated requested to follow the Sunna and observe the manners practiced by the Holy Prophet. This was followed by Fajr prayer. After Fajr prayer an enthralling and captivating Mehfil-e-Dhikr was held in the assembly area. It really moved the participants and filled their hearts with the divine light. Then the ‘mu’takifat’ continued recitation of their respective devotion, wazaif, especially the recitation of the Holy Quran individually in their rooms. After 08.30 they again gathered in the assembly area and offered congregational Salat-u-Tasbih. 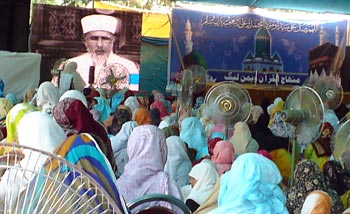 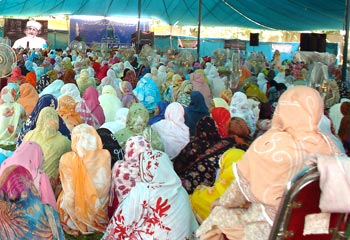 The daily address by Shaykh-ul-Islam Dr Muhammad Tahir-ul-Qadri started at 11.00 and ended before Zuhr prayer. He spoke on merit of excellence of Khalwa (retreat) and Uzla (seclusion). He explained to the audience the truth of retreat. He said that Islam does not teach giving up social life absolutely. The Sunna of the Holy Prophet is the model to follow. He would observance silence and go into retreat but living life in full. He would deliver his addresses impart education to the Companions and discharge his duties in social, domestic and private life. But he set the best model for us to follow. He would never talk unnecessarily and whenever he was quiet he would ponder and meditate. He would fulfill the rights of the relatives and neighbours and people in the society but left the Sunna for us to go into retreat as well. This is required to introspect and scrutinize the affairs of heart and soul. The balance-sheet of follies and sins has to be prepared and pondered over. These moments protect our Deen. So we need to spare a few hours daily and do this exercise. This turns the believers into Muttaqeen. So this is inevitable for all the leaders and workers of MQI. Shaykh-ul-Islam then went over the teachings of the Companions, their Successors, Followers and the eminent saints on retreat and highlighted its significance in the light of their views and statements. They included our master Uma Farooq, Hadrat Anas ibn Malik, Abdullah ibn Abbas, Sufyan Thawri, Hasan Basari, Dhunnoon Misri, Junaid Baghdadi, Ibrahim ibn Adham and many others (may Allah be well pleased with all of them). 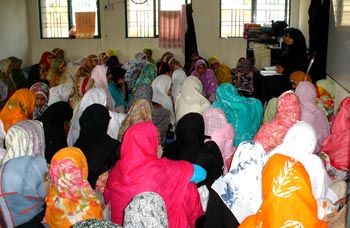 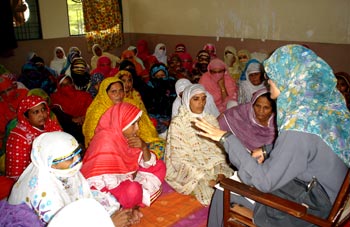 After the enlightening address by Shaykh-ul-Islam the ‘mu’takifat’ offered Zuhr prayer.

Then the Nizamat Tarbiyyat held meeting with the heads of the Sunna and Salat Committee, surveyed the performance made so far and brought to the fore the areas of improvement. They were especially briefed them to make dedicated and concerted effort to inculcate love for the Prophetic Sunna in the hearts of the Itikaf participants through repeated but polite reminders, announcements and personal example. That is to be is tilled into their hearts in way that it becomes their second nature. 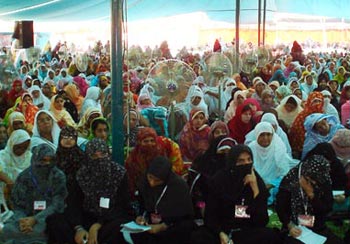 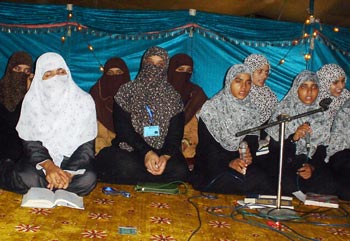 After a shortwhile the ‘mu’takifat’ joined their respective Halqa-jaat and the Mu’allimat delivered Dars No. 2 on the contents of Sura Noor. Today’s Dars highlighted the Quranic teachings on the methods of awarding punishment and cautions to be observed, the warning against fornication and its repercussions, the legal meaning of Qazaf, the command on Qazaf in the light of hadith, the commands pertaining to lashing, the witness subjected to Qazaf is rejected and the method of oath of condemnation.

After the Halqa-jaat were over, Asr prayer was offered. Later the ‘mu’takifat’ completed their recitation of individual wazaif and devotion assigned by Shaykh-ul-Islam. This was followed by Halqa-Durood and holding Mahafil in all Halqa-jaat.

After iftaar and evening prayer Isha prayer and Tarawih prayers were offered. Then the Medical Committee held meeting with the Doctors and Paramedical Staff and surveyed the performance and brought to light the areas of improvement. A meeting was also held with the Mahfil-e-Dhikr wa Na’at Committee and implementation of the schedule was surveyed and steps for further improvement were pointed out. Then the members of Gujranwala Na’at Council and Nishtar Town Na’at Council organized a Mahfil-e-Na’at in a beautiful manner. The Mahfil ended with Salam and special Dua. The ‘mu’takifat’ then left for their rooms. 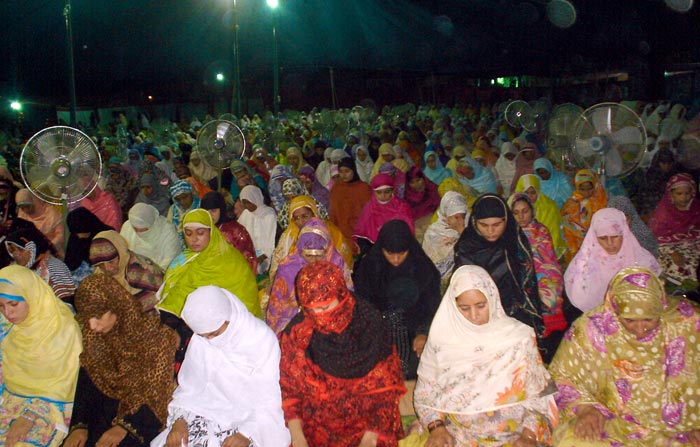