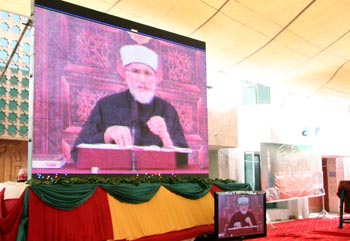 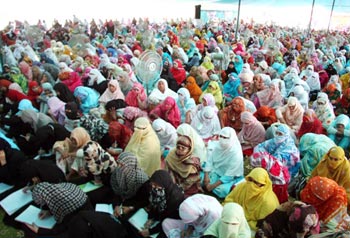 On 15th September, 2009 the 4th day of Women Itikaf commenced as usual with recitation of Durood-o-Salam by all the members of Sunnat and Salat Committee. One can see the blessings of Durood being showered when the ‘mu’takifat’ leave their sleeping places with great zeal and prepare themselves to bow before their Lord in Tahajjud prayer. After they had completed Tahajjud, the participants of Itikaf were served with Sahri in their rooms by the Mess Committee. According to the scheduled routine Fajr prayer was offered followed by Halqa Dhikr-o-Durood in the assembly area. Mohtarma Kulthum Tariq led the Dhikr session. The ‘mu’takifat’ then recited their individual wazaif allowed by Shaykh-ul-Islam and completed their spiritual works before the voluntary prayer, Ashraq. They came to the assembly area for congregational Salat-ut-Tasbih after 08.30.

He recited a number of verses of the Holy Quran. Some of them are as follows: 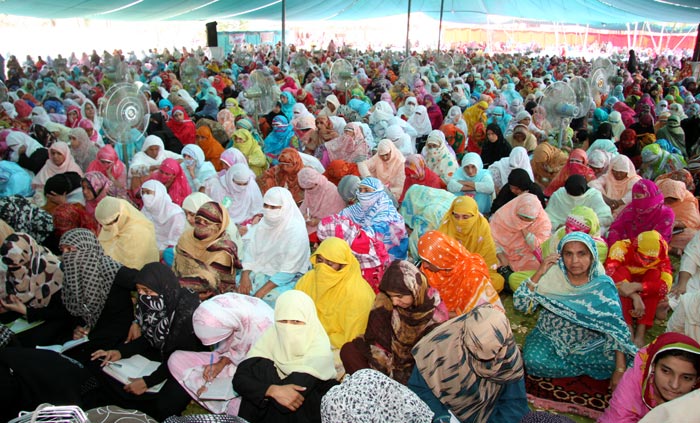 Explaining the word ‘brotherhood’, Shaykh-ul-Islam said that Allah Almighty made the Ansar of Madina as brothers. Later on after the ‘Mawakhat’, Madina became the first Islamic State, he recited the following verse no 103 of Sura al-Imran:

Shaykh-ul-Islam Dr Muhammad Tahir-ul-Qadri said that brotherhood brings the broken hearts together and is instrumental in seeking an end to the age-old enmities. He also explained the concept of brotherhood with the help of Prophetic traditions. He said that it is saying of the Holy Prophet (S.A.W) that piety and good behaviour with the fellow human beings would take people to paradise over and above everything. It is written in the ‘Sahih Musnad”. The Holy Prophet (S.A.W) said: Allah Almighty would have the chairs put around the Throne and those sitting in them would have their faces radiating like the full moon. Contrary to this, other people would be worried and crying here and there overwhelmed by fear. But the saints and the Friends of Allah would be free of any fear or grief. The Holy Prophet (S.A.W) said: Allah Almighty would say that these people loved one another in My Love in the world. I made them as My Friend as a result of this love. 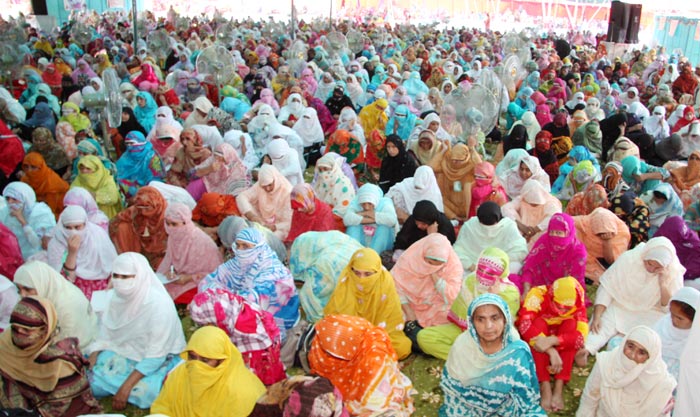 Referring to a Hadith of Imam Nasai narrated by Hazrat Abu Huraira (ra), he said that the Holy Prophet (S.A.W) said: the pulpits of light would be put around the Throne. Such people be seated on them whose faces would be light and their attire would also be light. But these people would neither be the Prophets nor martyrs. Prophets and martyrs would envy them. They would ask their Lord: O our Master, why were these people seated in such places. He would reply: these people loved one another for Allah and there is no other basis except it. That is why I perched them at this place. Allah said: Those who meet one another for My Sake I have made My Love binding on them.

Shaykh-ul-Islam said nostalgically that he recalls this verse of Mian Muhammad Bakhsh recurrently but gone are the days when such personages lived on the faced of earth. Where Rabia Basri or Junaid Baghdadi, Owais Qarni or Sari Saqti would come from in this day and age! This comment of Shaykh-ul-Islam made people weep. Recalling late al-Haaj Muhammad Ali Zahuri, he said that he would often ask him to recite this verse “They weep in separation, weep when they meet, and also in the performance of chores of life.” 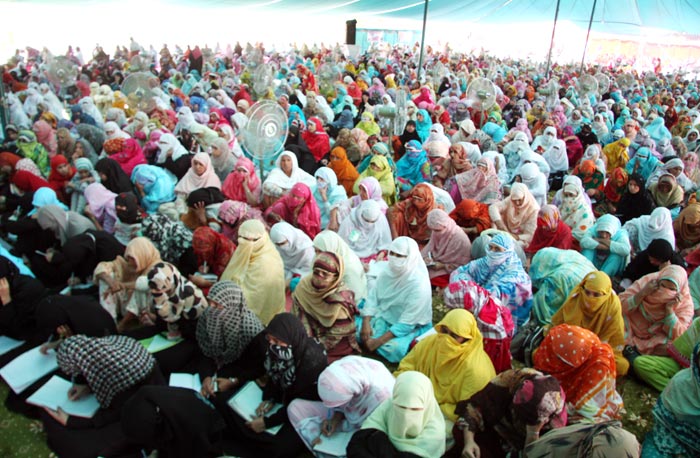 In the later part of the speech, Shaykh-ul-Islam Dr Muhammad Tahir-ul-Qadri threw light on the concept of brotherhood with the real life incidents from the lives of Allah’s Friends. He said that the soul of brotherhood requires that one should befriend such people as keep remembering you even after they have long left you. He said that Allah promised that He would perch such people on the pulpits of light on the Day of Judgment. These Friends of Allah would request Him about their loved ones and take them to paradise by taking them out of hell. On the other hand, infidels would regret saying would that we could join the company of such exalted figures. Would that we had befriended such people! 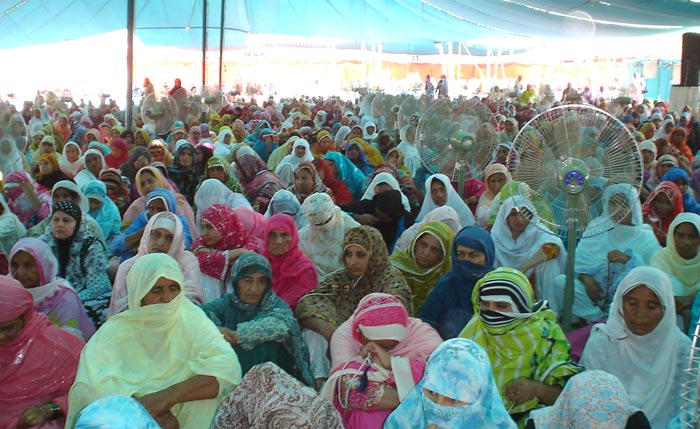 After Zuhr prayer the ‘mu’takifat’ went to their respective rooms. The entire central Women League team then paid a visit to all the Halls, met the ‘mu’takifat’ individually and enquired about their welfare and offered all help and assistance whatever they needed. They especially asked them about the daily schedule that is being followed, the general behaviour of the administration, the arrangements that have been made to facilitate Itikaf and any observation about any aspect of the activity. Most of the ‘mu’takifat’ appreciated all the arrangements and the daily schedule, and especially admired the method of ensuring implementation of the Prophetic Sunna and offering of Duas that have been adopted for the first time. The participants observed that the Sunna and Salat Committee was playing their role most actively. They have displayed charts; they make announcements to follow Sunna at the beginning of every activity and the Mu’allimat, Room Heads and Discipline Committees are doing their respective work nicely. They said they were benefiting from them the maximum.

Before the Mu’allimat had to go to Halqa-Jaat Mohtarma Fatima Mash`hadi, President Women League briefed them on the holy verses of Sura Noor they were going to cover in their day’s Dars. She especially emphasized that the Mu’allimat should highlight how the Quranic teachings should be followed and practiced in modern times.

Nazima MSM Sajida Sadiq held meeting with the students and briefed them on the significance of serving Deen. She explained to them the methods, ways and means to work in the field. She especially threw light on how the expected problems could be overcome during their field work. 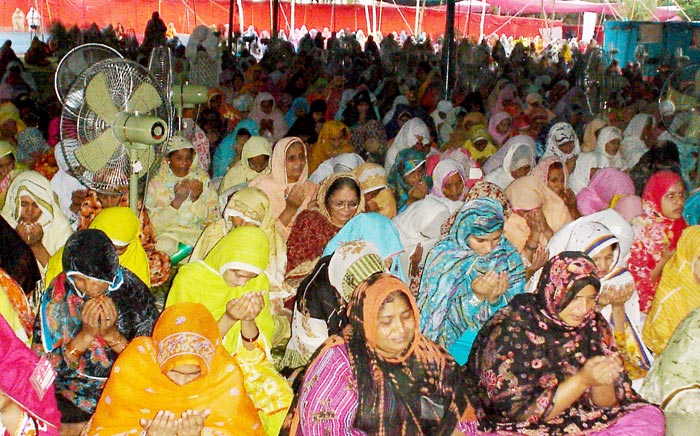 The Mu’allimat delivered their Dars according to the schedule. Today’s Dars was spread over the Sura Noor verse No. 27 to 34 and included problems pertaining to parda and their solution according to Islamic jurisprudence, the meaning of ayama, the independent men and women and safeguard of purity and chastity, and the merit of excellence of Nikaah.

After Isha and Tarawih prayer Mehfil-e-Na’at was held. The Na’at Khwan Sisters from Wahga Town and the Minhaj Women Na’at Council presented some really moving Nasheeds that would take one out of oneself into a state of ecstasy. Later Mehfil-e-Na’at being held at Markazi Itikaf was displayed on line. The Mu’allimat attended the Mehfil with the devotion exclusive for an odd- night (taaq raat) of the last ten days of Ramadan.

After the Mefil-e-Na’at Nazima Women League Mohtarma Sumaira Rafaqat Advocate called the training meeting for Tanzimat. It is a daily feature. Tanzimat of some given tehsil/tehsilaat are called daily to attend the meeting and discuss working plan, the laid down targets, methods to achieve the targets, the expected problems and their solutions, feed-back, follow-up and reporting the progress to Markaz. They also discuss how we can bring about improvement to make ourselves more and more effective to produce the desired results, what we are already doing in this regard and what we need to do. Today’s meeting was attended by Women League Gujranwala. They put up their reports on priorities and measures taken to enhance performance and presented suggestions and methods to further improve quality as well as quantity of work. The Gujranwala Tanzim expressed their satisfaction and hope for doing much better in future.