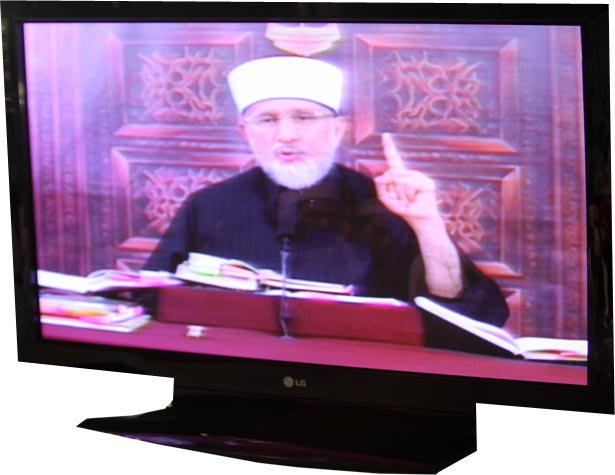 Shaykh-ul-Islam Dr Muhammad Tahir-ul-Qadri’s keynote address on the occasion of Juma-tul-Wida was the major event on the seventh day of Itikaf at the Itikaf City being organized under the aegis of Minhaj-ul-Quran International in Lahore. His address was also telecast live around the globe via QTV in addition to its being shown to the thousand of participants of Itikaf through video conference. His address for the Juma-tul-Wida started at 1:15 pm. He chose the topic of “internal and external state of heart” as the subject of his speech. He said that there were stages of internal state side by side with the external deeds performed by man. Prayers, fasting, Hajj and Zakat were the forms of the manifest worships; whereas the matters related to man’s heart and soul were its internal state.

He said that the manifest ill-commanding self was the capital of deeds and actions while soul was the pivot around which the ‘internal state’ revolved. There is a constant battle between soul and ill-commanding self. Soul wants the company of heart, whereas ill-commanding self seeks to enlist the support of heart and finally envelope it within its evil ambit characterized by darkness. On the other hand, soul wants to see heart as much clean and transparent as the former is. 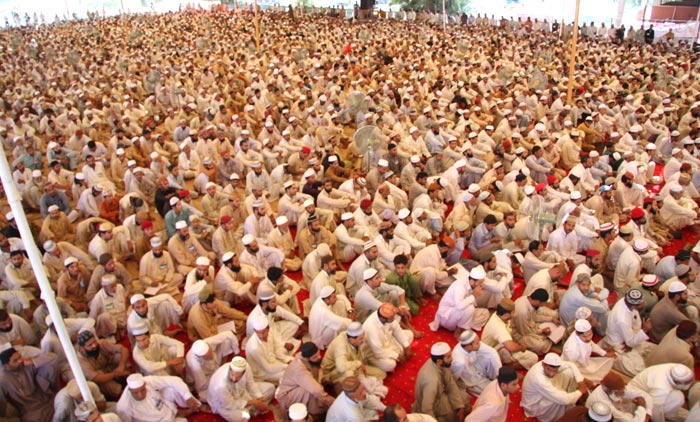 He said that someone whose heart became ignominious, his entire body would also become disgraceful and someone whose heart embodied light, every part and organ of his body would also become clean and spiritualistic. He said that if heart responded to the advances of soul, then Allah becomes hand, ear and eyes of such a person. In such a case, life becomes pious life. If heart gets this security and protection from the soul, this represents the beginning its journey. Such a heart is bereft of vices like greed, avarice, bias, enmity, and hatred.

He said when Allah’s blessings engulf someone; it causes his heart to become a source of peace and happiness. No difference between ‘I’ and ‘you’ is left. There is no difference between ‘my’ and ‘other’. The person, whom Allah gave the treasure of knowledge, expresses happiness by looking at others. This is the first sign of ‘peaceful heart’. Contrary to this, the state of our hearts is characterized by the signs of dirt and darkness. He said that ‘peaceful heart’ is a ‘productive’ heart, which benefits others.

Shaykh-ul-Islam said that no one would be able to benefit anyone on the Day of Judgment except the one with the ‘peaceful heart’. Saints and pious personalities would be productive for one another. He said that the friend is the one who does favour to the other but without letting him know. A friend is a Wali. This can give one an idea of how Allah’s Friend would be like. 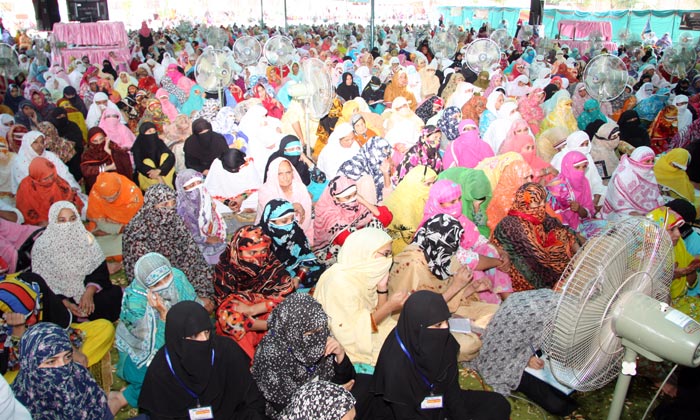 Hazrat Hatim Asamm was one of the respected saints. A woman used to attend his company. Her ablution broke during the course of one such gathering. She felt that Hazrat Hatim would feel bad about it. He came to know that the woman was getting embarrassed because of him. Turning her chair towards her, he asked her to raise her voice because he said that he was hard of hearing. When the woman found out that he was deaf, her entire embarrassment vanished. After this incident, Hazrat Hatim continued to pretend deafness in front of that woman all his life. When he died, it came to light that he was not deaf. This is the state of Friend of Allah who chose to become deaf.

In the same manner, Sultan Ibrahim Bin Ad’ ham took up the luggage of a traveler on his shoulders and continued traveling for three days. The Holy Prophet (saw) said that there would be forty such saints from among his Umma till the Day of Judgment whose hearts would experience the same internal state as was observed by Hazrat Ibrahim.

Shaykh-ul-Islam said that he does not claim that he read every book published in the 1300 year old history of mysticism but whatever literature came his way, he studied it penetratingly. He said that he never read any saying or comment of Sufi and saint who would have made saintliness conditional upon ‘wird’ and ‘wazifa’, thereby fixing its number as a criterion of becoming a saint. The Holy Prophet (saw) said that peace of hearts and magnanimity of selves made people saints. 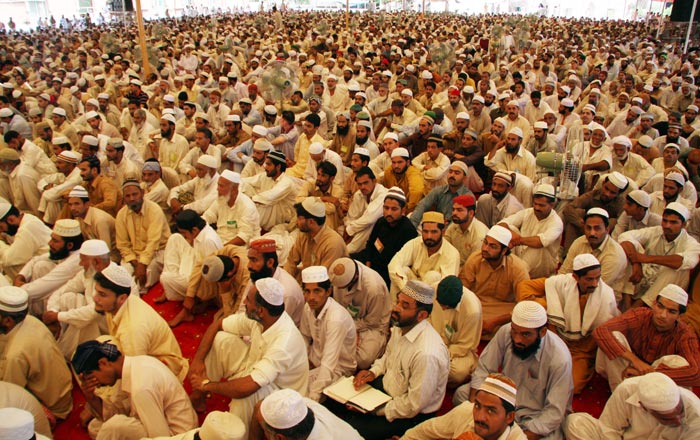 Those whose hearts got rid of goatishness, conceit and lusts became saints or Allah’s Friends. Besides this, those whose hearts became peaceful also became saints. He said that in mystical terminology, the world ‘generous’ is not used for someone who ‘gives’ as is commonly understood but it refers to such a person who forgives others over their excesses.

Referring to verse no 22 of Surah al-Anam, he held that Allah said: man’s heart was dead but We showed Our mercy and revived it. Then We breathed light into it after resurrecting the heart and the hearts of many people became the fountains of light. Then there were some people who were given so much of light that they not only became radiant with it but also continue distributing this light on the earth. Thus those people who join their company and gathering also become recipient of light.

There are other people whose hearts have become dead. The Holy Quran says: can those distributing light be like those who are themselves mired in darkness?

A heart in which light and darkness are in a mixed state is a diseased heart. Defining mysticism, Shaykh-ul-Islam said that generosity of heart is mysticism. Imam Abdur Rahman Sulami, Shahab-ud-Din Sohrwardi and other experts of the discipline have also defined mysticism on similar lines. Getting out of evil morals into the state of good morality is mysticism. He said that unfortunately we have limited mysticism to practices of pirs and their followers. 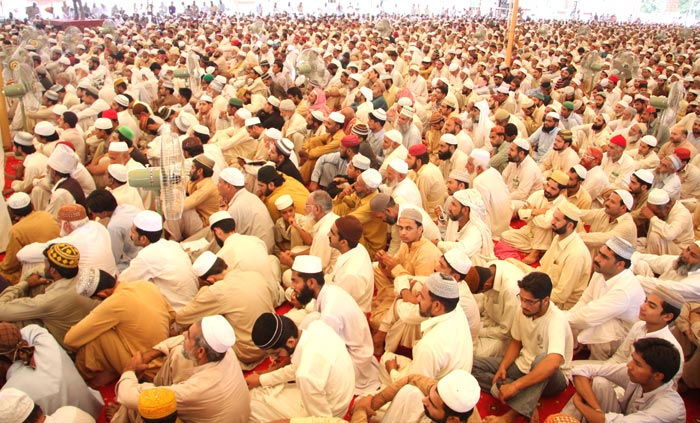 He said that bowing before and submitting oneself to Allah is mysticism. A state which grips heart in the course of seeking gnosis of Allah is mysticism. Such a heart does not take into consideration the demands and attractions of the world. It is so detached from the worldly pursuits that pains and pleasures cease to cause grief and joy to the heart. One reaches this stage because one’s heart is beholden to Allah and His Commandments.

Hazrat Abdur Rahman Sulami reports Hazrat Zunnain Misri as saying that when a man is in the constant company of Allah, it is mysticism. Imam Qushairi said that mysticism comprised four stages; love of Allah Almighty, bias and hatred against the world, the obedience of the Holy Quran, fearing that the state achieved by the heart might not changed. When these four things are combined, this is real mysticism.

He said that the worldly riches and wealth were meaningless as these were the temporary things. When Friends of Allah would be equipped with Allah’s love, other people would cry. When one attains such a state, he enjoys weeping more than laughing, remaining awake than sleeping and keeping mum than speaking. Then Allah Almighty would show Himself by taking the curtain off, this would provide such an ecstasy that the worldly wealth would look inferior. What else one needs when one’s Creator has become pleased with him! 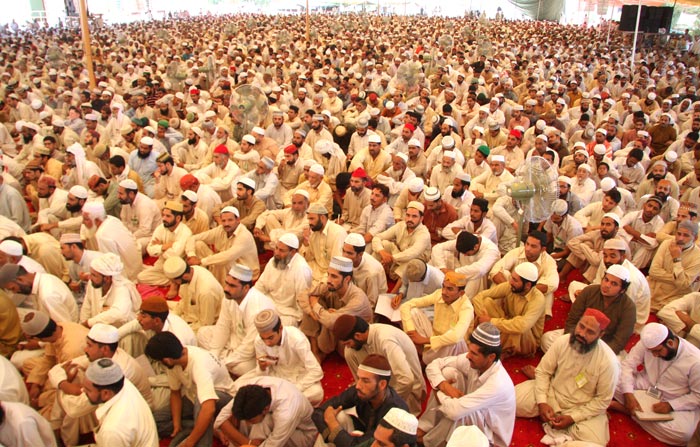 Hazrat Dawood (AS) submitted to Allah Almighty: O my Lord, show me someone who is recipient of Your Love. Allah said: Dawood, if you want to see those who have love for Me, you would find them in the mountains of Lebanon. You would find fourteen people there including the old and the young. When you go to them, pay them My Regard. Ask them that your Lord has sent peace on you. Ask them whether they need anything. Hazrat Dawood went there and enquired of them about any need or demand. Hazrat Dawood says: when I talked to them, their eyes started raining like flood. I asked them as to what they wanted. They said: go to your Lord and beseech Him to forgive us.

Hazrat Data Ganj Baksh writes in his magnum opus ‘Kashful-Mahjub’ that Allah asked His Prophet that there was his subject living in a mountain. He should go to him and convey him His message that his worship of 70 years was rejected. When he was given this message, he started dancing with joy and ecstasy upon hearing it. The Prophet asked: your worship spanning over 70 years was rejected but you were dancing to hear it. The person replied: I do not care about my worship of 70 years. I am one of His humble subjects and it is my duty to worship Him. But since my Lord has sent me message, it means He remembered me. I have been included in the list of those whom He knows.

Shaykh-ul-Islam said that such a state is pure mysticism. His address concluded on 2:30 a.m.