The proceedings of 28th Ramadan, the eighth day of Women Training Itikaf started as usual. The ‘mu’takifat’ were wakened up by the Sunna and Salat Committee chanting the spiritual melody of Durood-o-Salam. The supererogatory ritual prayer of Tahajjud was performed. Every participant had a feeling of tranquility getting closer to their spiritual training wind-up. The food was served in their rooms. This was followed by Fajr prayer in the assembly area. A beautiful Mehfil-e-Na’at was then organized. All the ‘mu’takifat’ attended and participated in the Mehfil with great keenness. Then they left for their rooms to take rest till Sala-ut-Tasbih at 10.00.

The daily lecture by Shaykh-ul-Islam Dr Muhammad Tahir-ul-Qadri started after the Sala-ut-Tasbih was over. Today he spoke on the role of Tehreek Minhaj-ul-Quran pertaining to preaching the divine commands and prohibitions (amar bil’ma’ruf and nahi anil’munkar) and calling the people towards good and righteousness (da’wa ila’l-khair). Tehreek Minhaj-ul-Quran is a movement of turning towards Allah, turning towards Allah’s Messenger, turning towards the Quran, turning towards beneficial knowledge and implementation and enforcement of Deen in our lives (ruju’ ila’Allah, ruju’ ila’r-Rasul, ruju’ ila’l-Quran, ruju’ila’l-Ulum and aqamat-e-Deen). The Muslims are the 70th community charged with the responsibility to preach the divine commands and prohibitions. He recited the verse No. 104 of Sura Al-Imran: 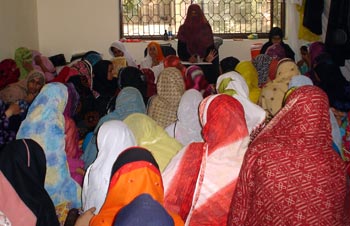 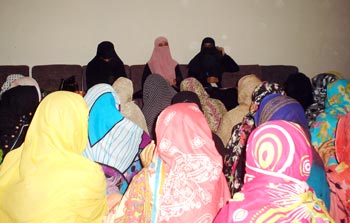 “And from amongst you there must be a community comprising the people who would invite mankind towards piety, bid righteousness and forbid evil. And they are the successful people.” (al-Quran, 3:104)

He also recited verse No. 110 of the same Sura:

“You are the best community brought forth for (the guidance of) mankind: you command righteousness, forbid evil and believe in Allah. Had the People of the Book also embraced faith that would certainly have been in their favour. There are some among them who believe, while the majority of them are disobedient.” (al-Quran, 3:110)

So calling towards good, commanding piety, prohibiting evil and embracing faith are the four attributes of a true servant of Deen. And that is what we are supposed to do. The reward for this struggle is greater in times of disruption than in the days of calm and peace. Allah and His Beloved Messenger has warned that the torment will seize the people when the Umma will stop doing this duty of spreading good and forestalling and eradicating evil from the society. So, giving up the duty of Da’wa means inviting Allah’s torment. Shaykh-ul-Islam then recited and elaborated numerous Prophetic traditions and the statements of the Imams to substantiate his assertion. He especially mentioned the example of annihilating torment that afflicted the Children of Israel due to abandoning the responsibility of spreading good and preventing evil. He said according to the Quran and hadith similar calamity would befall us if we too commit negligence and do no come in the way of evil and save ourselves from oppression and tyranny against human rights and peace and security for mankind. He recited several Prophetic Traditions on this subject. The Holy Prophet has said that a time will come when people will see oppression but will do nothing to stop it and the whole nation would be tormented. A nation with obvious violation of divine laws despised by the majority but doing nothing to eliminate evil despite having opportunity to do it by vote will be considered accomplice to the oppression in practice and the entire nation will be seized by Allah’s torment. According to another hadith reported in Abu Dawood the people who has the power to bring in good change, criticize evil in vogue, have the power to bring a change for good but do nothing while they are in majority and the evildoers are small in number, the total community will be afflicted with the severe torment. He mentioned Tradition Nos. 4341, 3058, 4014, 4342, 4343, 4344 and 4345 of Abu Dawood; all describe the same subject. 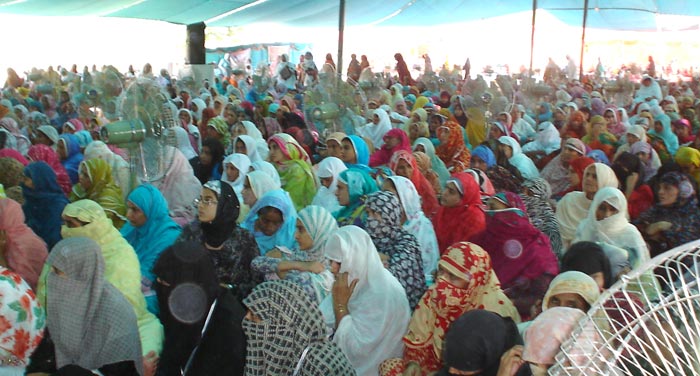 Shaykh-ul-Islam Dr Muhammad Tahir-ul-Qadri narrated another hadith containing glad tidings for those who will work for a change for good in the community. According to the Holy Prophet (blessings and peace be upon him) a revivalist (Mujaddid) will be raised in the beginning of every century for the revival of the true Deen and reconstruction of the Islamic doctrine and beliefs to spread the divine commands and prohibitions and call the people towards good, welfare, moderation, love, brotherhood, peace and security through a revivalist platform. He will be the Mujaddid of his time. His faith will be protected and he will work for the protection of the faith in the community. He said Tehreek Minhaj-ul-Quran is a movement of revivalism in modern times. Wrong beliefs prevailed and every act of love for the Holy Prophet and the pious servants of Allah were being labeled as Shirk and Bid’a. The prejudice prevailed and true knowledge of the Quran and hadith diminished. They regarded Na’at Khawani an act of Bid’a. Now they are doin Na’at Khawani themselves. The spiritual values have revived and Itikaf is in vogue. A new awareness and spiritual consciousness has awakened. And people are now well aware of what is Tawhid and what is Shirk. This is all due to the scientific presentation of the spiritual values of Islam. The concept of Da’wa ila’l-Quran has revived. Durus-e-Quran are being organized. People have started coming towards the Quranic learning. Gosha-e-Durood is flourishing and love for the Holy Messenger of Allah is illumining the hearts of the people. This is because the MQI is doing its duty of spreading the divine commands and prohibitions and the call for turning towards good is being transmitted effectively.

He urged the Mu’tafikin and Mu’tefikat to promote the work of Dawa in their respective areas, establish halqa-jaat Irfan-ul-Quran, increase membership of the MQI and get more and more wabastgan of Tehreek as many as two million this year only, make halqa Durood more and more popular and effective and spread haqa-jaat Irfan-ul-Quran as far as possible. Observe the proprieties of Akhuwa and Suhba, the human rights, live with tolerance and forgiveness and always repent for your follies never to commit sins again. Allah will shower His blessings on you in abundance. That is His promise.

Ater the speech by Shaykh-ul-Islam Dr Muhammad Tahir-ul-Qadri the Tanzimat meeting started as usual. President, Nazima and the Naib Nazima WL conducted the meetings with Tanzimat and discussed issues pertaining to implementation of the annual working plan, the methods of implementation of the working plan, new suggestions in this regard, the steps to be taken to enhance rukniyyat, membership and wabastgi and making the Tanzimat programs more and more effective. In the meanwhile the Mu’tefikat took rest after Zuhr prayer. This activity was followed by Halqa-jaat for Sura Noor. The Mu’allimat delivered their last Dars covering the remaining verses of the Sura.

Mehfil-e-Na’at was arranged after Asr Prayer. Sisters from different areas of Lohare town presented their nasheeds. The Mehfil ended with Mehfil-e-Dhikr and Dua. Then the Participants went to their respective rooms for Iftaari. The ‘mu’takifat’ again assembled for Isha and Tarawih prayers. Later a beautiful Mehfil Na’at was organized and Shab-Baidari was observed. Mohtarma Shumaila Abbas and Shabina Majid presented their spiritually moving nasheeds and captivated the hearts of the ‘mu’takifat’. After the Mehfil ended the Mehfil still on in Markazi Itikaf was shown to the ‘mu’takifat’ on projector. It continued till 03.00 a.m. and ended with Dua and Salam.