MWF holds ceremony in memory of martyrs of Earthquake 2005 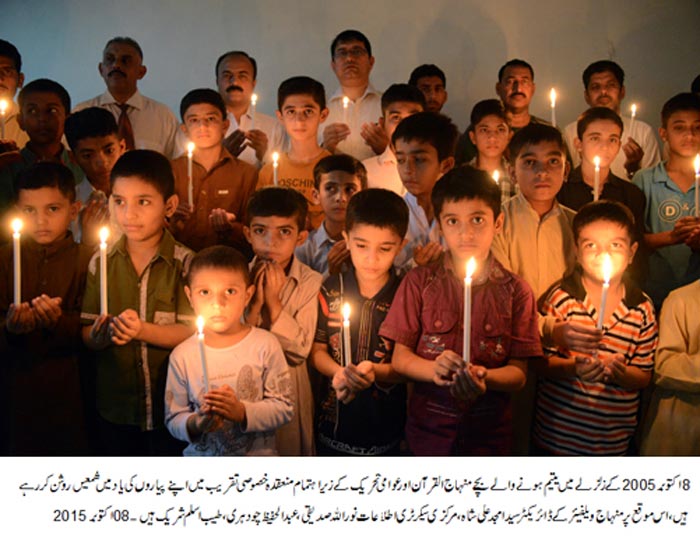 Addressing a ceremony held under the banner of Minhaj Welfare Foundation to mark the 10th anniversary of the devastating earthquake 2005, PAT Chairman Dr Muhammad Tahir-ul-Qadri has said that thousands of families who were saved from the earthquake have suffered endlessly at the hands of the government due to the latter’s insensitivity and apathy. He said that they still are under open skies awaiting the government’s aid to help them get out of their miserable condition. He said that Minhaj Welfare Foundation has been taking care of hundreds of orphan children whose parents died in the earthquake, adding that we are thankful to Allah Almighty Who enabled us to share the grief and sufferings of the affected children. He said that had 50% of billions of dollars received in foreign aid reached the deserving, the hundreds of thousands of families and students of Azad Jammu and Kashmir would not have been seen to be living under the open skies.

Fayyaz Malik, Shafiqur Rehman, Khalid Ahmad, Junaid Iqbal, Ahmad Naeem, Muhammad Afzal, Ali Raza and Zubair Sultan, the resident students of Aghosh, also spoke on the occasion. They said that they are grateful to Dr Tahir-ul-Qadri and Minhaj-ul-Quran International for taking extreme care of them more than that of the parents and giving them opportunities to get education. They said that their stay at Aghosh has helped them be mainstreamed back into life enabling them to fulfill the dreams of their parents.

Talking to the media, MWF Director Syed Amjad Ali Shah said that following heart-wrenching and devastating earthquake in 2005, Dr Tahir-ul-Qadri directed us to construct a facility within the shortest possible time that could have the capacity of educating and providing residential facilities to the orphan children. He said that keeping the direction of the PAT leader and the urgency of the task in view, MWF built a state of the art building by the name of Aghosh and made arrangements for provision of education and maintenance of over 400 affected children. He said that out of the children who joined Aghosh in miserable condition back then, majority are getting higher education. MWF Director invited the people belonging to different walks of life to visit the Aghosh and inspect the quality of arrangements of education and residence for the orphan children.

Addressing the ceremony, Minhaj Foreign Affairs Director GM Malik said that the government did not fulfill the promises government made with the affected families after the earthquake of October 8. He said that a large number of the earthquake affectees still do not have access to health and education opportunities and clean drinking water. He said that due to non-fulfillment of the promises, they are forced to live in camps and temporary houses. He said that the government should end its insensitivity and make rehabilitation of the affected families as its top priority.

Noorullah Saddiqi said that more than 6000 schools were destroyed in the earthquake and majority of these have not be rebuilt even today. He said that if the rulers have billions of rupees to run white element projects such as metro buses, why do not they have money for construction of educational and health facilities? He paid rich tributes to Dr Tahir-ul-Qadri over his people-friendly and appreciable role in making arrangements for maintenance and education of the orphan children.