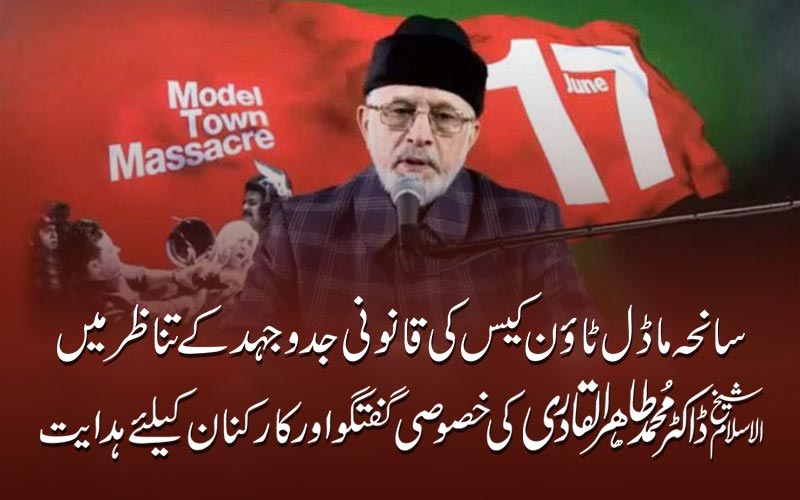 Minhaj-ul-Quran International leader Dr Muhammad Tahir-ul-Qadri has said that there were three phases of the protest movement aimed at seeking justice in the Model Town case. Firstly when the FIR was not being registered; secondly, when the report of Justice Baqir Najafi Commission was not being made public and thirdly, when the demand for the formation of neutral JIT was not being accepted. The workers took to protest at that time. The detail of these three phases is given as under:

(1) The protest that was staged in 2014 was in response to the non-registration of the FIR in the Model Town. So much so that the government led by the Sharif brothers refused to register the FIR despite an explicit judicial order. The registration of the FIR, however, could be possible only after the repeated interventions of the then Army Chief during the protest movement.

(2) The second phase of the protest continued between 2015 and 2016. Our demand at that time was that the report of the Justice Baqir-led Judicial Commission should be made public. The Commission was constituted on the request of the then Punjab government, which was also responsible for the Model Town tragedy. The Commission completed its report within the stipulated time and formally submitted it to the Government of Punjab. The Punjab government, however, refused to publish the report and we were protesting constantly to put pressure on the government to make the report public. Later on, it was on the orders of the Honorable Lahore High Court that the Najafi Commission report saw the light of day.

(3) The third phase of the protest was focused on the demand for the formation of a new Joint Investigation Team (JIT) to hold an impartial investigation into the Model Town tragedy. Killing the essence of justice after humanity, the then government formed a JIT comprising handpicked offices who were beholden to the ruling family. This JIT submitted the challans unilaterally to the anti-terrorism court without recording the evidence and statements of the eye-witnesses and the injured of the tragedy. Our point of view was that a new JIT should be constituted, which should at least record the statements of the eye-witnesses and the injured. The workers were continuously protesting to get this legal right.

Later on, Chief Justice of Pakistan Mian Saqib Nisar took notice of this and the new JIT was formed as a result of the hearing of the case before the larger bench of the Honorable Supreme Court. I personally appeared before the larger bench and presented our point of view. After the formation of the JIT, the SC ordered that we should become part of the legal process instead of adopting the path of protest. We called off the protest in the light of the order of the Supreme Court of Pakistan and after our longstanding demand was accepted.

Now the matter is in the court and it has to reach its conclusion through the legal process. Although the JIT that was formed as a result of the hearing in the Supreme Court was suspended by the High Court, we again went to the apex court for the restoration of the new JIT. The Supreme Court ordered the Lahore High Court to institute a new bench and by the grace of God, the larger bench of the Lahore High Court has only been constituted but it has also conducted the first hearing. Our lawyers are carrying on with the legal proceedings in the Supreme Court, Lahore High Court, and the anti-terrorism court simultaneously in order to seek justice. Senior lawyers in their respective fields are pursuing this case. Makhdoom Majid Hussain Shah Advocate is the head of the legal team. Thanks to the hard work of this legal team, the bails of the 93 PAT workers who were booked on false charges by the police were accepted.

Getting justice for the weak in the face of the powerful is almost next to impossible in Pakistan. However, when the case is pending before a court of law, it is the court that adjudicates it and delivers its final verdict on it and there is no other forum for this purpose.

Some mischievous elements are trying to give this perception that justice in the Model Town case is not being provided because the path of protest has been abandoned. Various appeals are pending in different courts of law. The question arises: should the protest be carried out against the courts? The full and undivided attention is focused on the legal process instead of the protest, particularly after an explicit direction of the larger bench of the Supreme Court.

I have personally been appraising the developments in the case on a daily basis. I have held online meetings with the lawyers before every hearing and carried out the consultation for hours on end. A whole new department consisting of the best lawyers has been set up to pursue the case single-mindedly. The legal team remains in constant touch with me. We have also borne the expenses of the millions of rupees in legal fees because the justice in the Model Town case is not just our desire but also part of our faith. We would continue this struggle for justice unabated till the last breath of our life.

Senior lawyer Makhdoom Majeed Hussain Shah Advocate is the head of our legal team and a large team of experienced lawyers has been raised for his assistance.

The workers should give a befitting reply to the negative propaganda in the light of above-mentioned viewpoint. There are some mischievous elements who never entered a good word for the oppressed of Model Town tragedy. However, whenever they get a chance, they freely express their negative opinions on all forums including social media to discredit our years-old struggle with a clear aim to spread the disappointment and despondency among the workers. This negative, baseless, and misleading propaganda should be responded to. It goes to the credit of the PAT and MQI workers that they did not let the Model Town case be buried under the debris of the official files. We stand committed and firm on every forum in our demand for justice and Qisas from the killers.