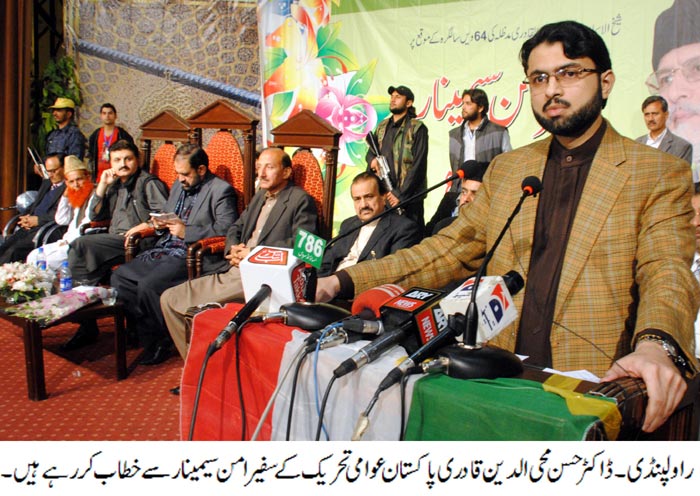 Dr Hassan Mohi-ud-Din Qadri, the head of PAT Supreme Council, has said that each and every thing Dr Tahir-ul-Qadri said about the exploitative and corrupt system has proven true in the form of a bitter reality before the nation. He said that while the armed forces and the nation are fighting against terrorism, the rulers are consumed by the thought of strengthening their rule in Senate. He said that Dr Tahir-ul-Qadri has given so much awareness to the people that deprived sections of society are staging sit-in for their rights in every city. He said that ten-point agenda of Dr Tahir-ul-Qadri is the voice of every citizen, adding that the day he gets power, no one would go hungry and thirsty. He said that those talking of deal in the wake of end of sit-in cannot buy even shoes of Dr Qadri.

Dr Hassan Mohi-ud-Din Qadri expressed these views while addressing ‘Ambassador of peace’ seminar held under the banner of PAT in Rawalpindi Arts Council. The seminar was held in connection with 64th birthday of Dr Tahir-ul-Qadri. The workers and people attended the ceremony in large number.

The Supreme Council President said that the Model Town tragedy is a noose around the necks of rulers and we would surely retire the debt of the martyrs. He said that Dr Tahir-ul-Qadri will be reaching Pakistan in a few days, adding that the workers should accelerate the pace of their struggle. He said that the destination is not far way off and the elitist democracy will collapse under its very burden because it has thrived on the blood of the people.

While speaking on the occasion, Central PAT President Dr Raheeq Ahmad Abbasi said that we pay tributes to the efforts of General Raheel Sharif for elimination of terrorism but the scourge cannot be eliminated without working on intellectual and ideological plane. He said that present rulers are political wing of the terrorists. He said that national economy has been mortgaged with IMF. He said that we want to change the corrupt system so that the nation could be saved from being exposed to the prospect of bloody revolution. He said that those who lost in general elections are being brought to power through Senate elections. He said that the Election Commission is helpless as all decisions are being taken by the corrupt politicians.

Addressing the seminar, PML-Q Senator Ajmal Khan Wazir said that our democracy is a slave to the industrialists and the moneyed classes. He said that those who are getting elected to Senate by spending Rs. 200 million for each position are not coming for service of the people but to loot and plunder the resources. He said that Parliament does not have any power of legislation regarding FATA and it is the President of Pakistan who is repository of all powers in this regard. He said that he would stand by Dr Tahir-ul-Qadri through thick and thin.

Former PPP leader B.A. Malik said that it is the result of historic struggle of Dr Tahir-ul-Qadri that every individual of the nation has started talking about his rights today. He said that like Bhutto, Dr Qadri has also given courage to the downtrodden sections of society to stand up to the powerful and demand their rights.

Dr. Hassan has arrived at the 'Ambassador of Peace' seminar in Rawalpindi. #DrQadriSymbolOfUnity pic.twitter.com/jmM5YIW76b

Dr. Hassan delivering his keynote speech at the 'Ambassador of Peace' seminar in Rawalpindi. #DrQadriSymbolOfUnity pic.twitter.com/sft8FHLRpx