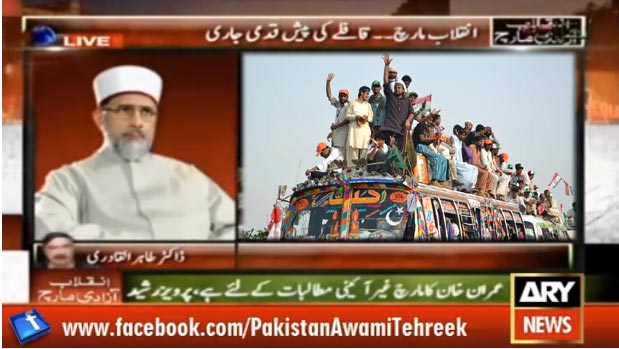 GUJRANWALA: Pakistan Awami Tehreek (PAT) chief Tahir-ul-Qadri along with his caravan reached Gujranwala as a part of his revolution march and claimed that the ruling Pakistan Muslim League (Nawaz) has hired many ‘Gullu Butts’ who can attack protestors, ARY News reported.

As Mr. Qadri along with the marchers reached Gujranwala, speaking to ARY News, Qadri said that this Inqilab (revolution) march will not stop before reaching its destination and purpose.

PAT chief feared that PML-N may have hired Gullu Butt ( a disguised violent protestor of Model Town Incident) style people who can attack caravans of PAT workers and appealed to his workers that they should not let anyone disturb their peaceful march.

“In case of any serious attack, I will announce the future strategy”, said a determined Qadri.

PAT chief announce that Inqilab March’s route plan has been changed and the caravan will reach Isalmabad in forty eight hours.