Minhaj Women League has actively worked for the promulgation of peace, socio-welfare uplift and character building of the women. Congratulations to all its workers and designates on the occasion of 31st #MWLfoundationDay.@MinhajSisMWL 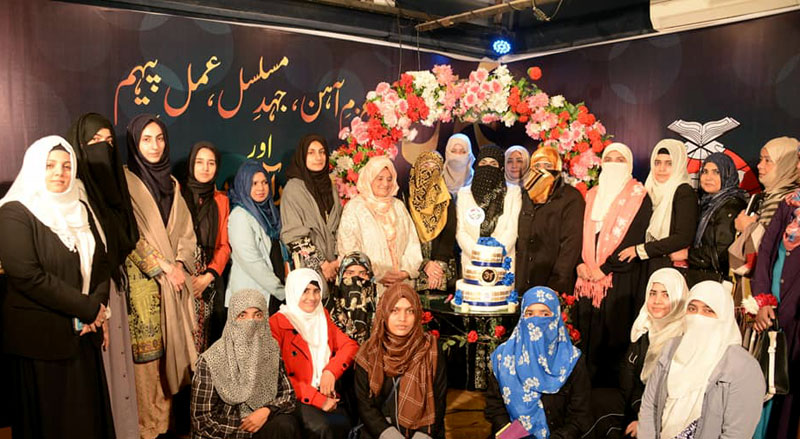 MQI leader Dr Muhammad Tahir-ul-Qadri has congratulated the workers and leaders of the Minhaj-ul-Quran Women League on its 31st foundation day. In his message, he said the daughters belonging to MWL rendered appreciable services in the fields of welfare, spiritual training, and education. He said they also did justice to the struggle against the oppressive system and social evils in addition to their role in the promotion of education.

Addressing the central ceremony, Ms. Farah Naz said if Muslim woman adopts the way of life of Sayyida Faṭimah al-Zahra (S.A), the society will become ideal. She said the secret of success of MWL lies in sincerity and constant effort. She said the best act is to send greetings and salutations on the Holy Prophet (peace and blessings be upon him), adding that we should seek guidance from the Holy Quran by reciting it. She said Dr Tahir-ul-Qadri provided the platform of MWL to women for the protection of their rights. She said by founding MWL 30 years ago, Dr Qadri gave this forum to women from where they could play an effective role to uphold the faith.

Farah Naz said unless the women, sitting in the top corridors of power, play their constitutional and legal role by rising above the interests of their parties, the problems of the womenfolk will not be resolved nor will they be able to get their rights.

General Secretary Sidra Karamat said in her speech that MQI is a representative organization of the whole Muslim community. She asked the women to identify their role and status within the confines of the self, stating their ornament is not jewelry but modesty and piety. She said we will have to enlighten our hearts with the love of the Holy Prophet (peace and blessings be upon him) and remove the dirt of sectarianism from our hearts. She said MWL stands at a juncture where its message of peace, love, interfaith harmony and women's rights is reaching the five continents with the result that hundreds of thousands of women have become part of the MWL caravan and are engaged in promoting this message.

Dr Shahid Naumani, Ayesha Mubashar, Noreen Alvi and Anila Ilyas also spoke on the occasion and said MWL is the inheritor of the message and role of Sayyida Faṭimah al-Zahra (S.A) and Sayyida Zaynab (S.A) and is playing its role to promote the message of peace, love and interfaith harmony. They said its services will be written in golden letters it is rendering for the women's rights of education and spiritual training under the patronage of Shaykh-ul-Islam Dr Muhammad Tahir-ul-Qadri. They said the struggle to change the inner and outer aspects of life with the light of knowledge can bring about positive change in society, stating that the women will have to play a fundamental role for this purpose.

MWL leaders said knowledge leads to action which later becomes the basis of spreading the fragrance of peace in the society. They said the women occupy a central role in the vision that Dr. Tahir-ul-Qadri has enunciated for the change in society. They vowed to keep working for promoting the Islamic values of peace and love under the leadership of Dr Qadri.

A special Dua was made for the martyrs of Model town tragedy and tributes were offered to Shaheed Shazia Murtaza and Tanzila Amjad. The ceremony ended on the cutting of a cake marking the 31st foundation day.

Today on 31st #MWLfoundationDay of Minhaj Women League, I extend my heartiest felicitations to the entire team of MWL who have rendered their services in taking forth the vision of Shaykh-ul-Islam in an effective manner.@TahirulQadri@MinhajSisMWL

Minhaj Women League has been the torchbearer of promoting peace in society and has done an extraordinary effort in leading the women section of our society towards the right direction.#MWLfoundationDay@MinhajSisMWL