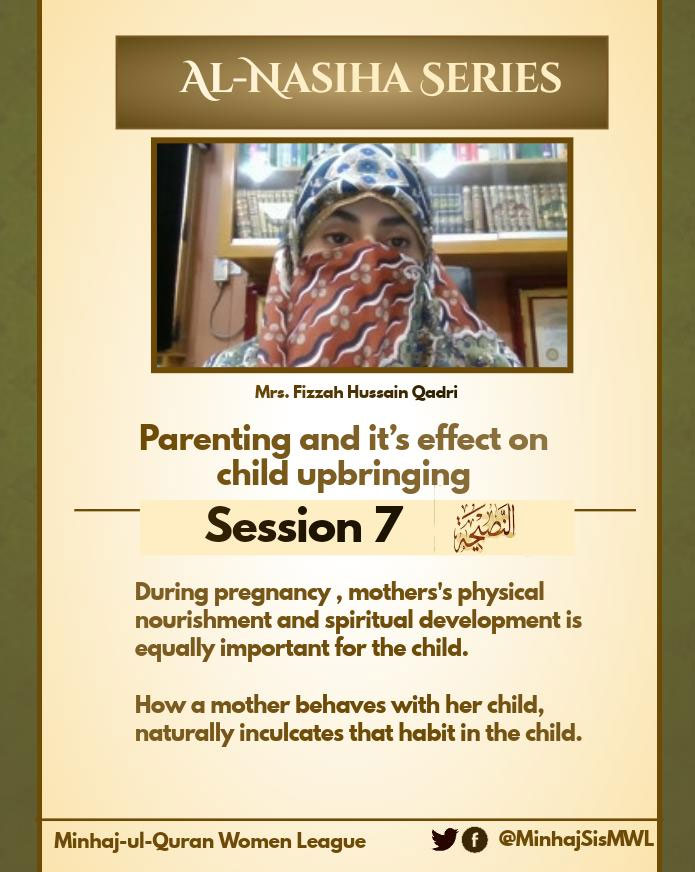 Today was the seventh session of Al-Nasiha Series with Mrs. Fizzah Hussain Qadri. This set series of 8 sessions are focusing on the training of 100 families through weekly sessions with mothers. Important aspects of parenting, role of mother, and wife remained subjects of the sessions.

The topic of today's session was "Parenting and it’s effect on child upbringing". On this important subject, Mrs. Fizzah explained two important phases which have great impact on the upbringing of children.

Pregnant mothers need to equally focus on their physical nourishment and spiritual development of herself as it has a direct impact on the child at the very basic stage before the birth. It must be fulfilled with due responsibility and is the right of the child to be taken care of at this level.

Mrs. Fizzah said that the conduct, behavior and ways that a mother opt towards others in front of the children and in her direct dealing with them has an impact on the personality and psychological development of the children.

Mrs. Fizzah has also pointed at the spiritual, moral and religious aspects of parenting which she said are really important as mentioned below:

Religious: From the very early age, parents must familiarize the children with the personalities and conduct of esteemed religious models to deeply inculcate that habit in their children. This is important for their religious understanding, attachment and sense of affiliation.

Moral: Even if for a good reason or intention, parents lie in front of or directly with their children, it negatively impact their children as they see their parents as role models.

Spiritual: This is important and normally a neglected aspect of how parenting impact their children. While explaining this, Mrs. Fizzah explained with an example that sometimes, mothers overfeed their children or else do not stop them from over eating and they assume it healthy. With this habit they induce in their children the nature of greed and thanklessness in a long run. So, it impacts and hinders the spiritual development of the children in an unseen way.

Towards the end, Mrs. Fizzah congratulated President MWL Farah Naz, Al-Nasiha Coordinator Anila Ilyas and whole of MWL team for successfully organizing this series of Al-Nasiha with 100 families and congratulated the members whole have joined the sessions from Pakistan and abroad.