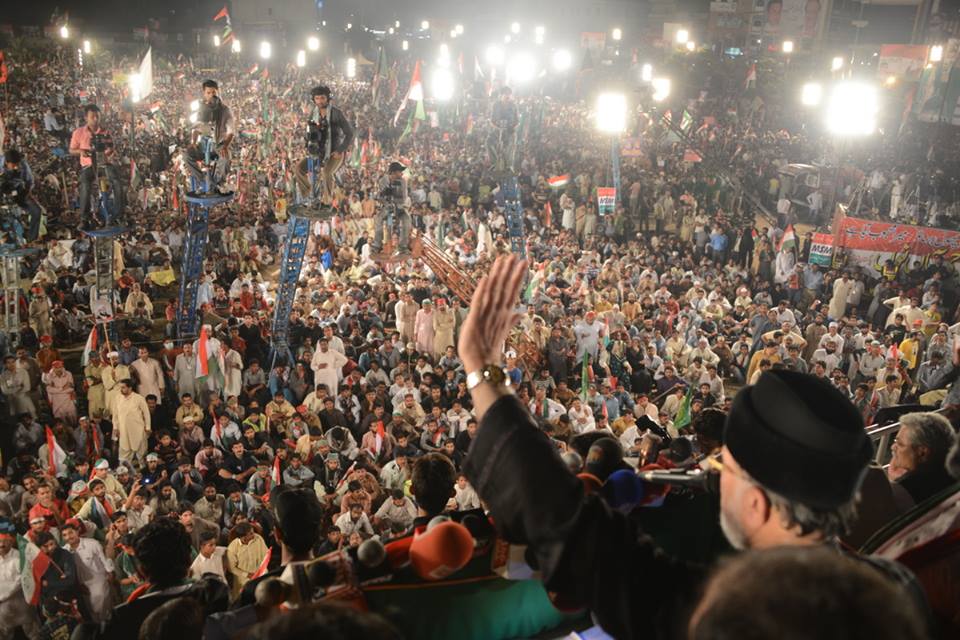 LAHORE/FAISALABAD: PAT chief Dr Tahirul Qadri on Sunday said no power could stop his party from bringing a revolution in the country which would free the poor from the clutches of poverty, unemployment and injustice.

“A revolution is the ultimate destiny of the country,” a charged PAT chief said while addressing a large gathering in Faisalabad at the historic Dhobi Ghat Ground (Iqbal Park). He asked the people not only to vote him but also give him ‘(currency) notes’ (financial assistance) and support.

Qadri added that the rally was a historic referendum in favour of those who wanted reforms in the political structure.Qadri said his party would make six new units — including Faisalabad, Multan, Gujranwala and the Seraiki belt — in Punjab after coming to power. He also promised to overcome the energy crisis within two years of his rule.

He criticised the cooperation between the PML-N and PPP, saying they were symbols of the status quo and had failed to deliver despite enjoying power for multiple tenures. “We will oust them from politics once and for all with the support of the masses.”

“Fake democracy and Pakistan cannot move ahead together. The status quo-based system and corruption can no longer remain intact in the country,” Qadri said.

About his 10-point reform agenda which he had formulated in Canada, the PAT chief said speaking for the poor and needy was his biggest crime. He said over a dozen innocent workers were shot dead and 80 others injured in Model Town only to teach them a lesson for speaking against the oppressors.

Terming Faisalabad as the heart of Punjab, Qadri said the voice of the city’s people was like that of the entire Punjab as they had stood up against the corrupt rulers, adding that the time had come for the rulers to resign from their offices.

He said the Sharifs brothers had proved to be cruel rulers and they did nothing for the prosperity of the common man, adding that the FIR of the Model Town incident was registered against them only after his party had staged a sit-in Islamabad.Qadri announced holding sit-ins throughout Pakistan after the success of the Islamabad sit-in which, he said, would also continue.

Four SPs, 12 DSPs, 10 inspectors, 52 sub-inspectors, 95 ASIs, 52 constables and 1,023 FC personnel were deployed for security purposes for the rally. Ten teams of the Elite Force were also deployed for patrolling while shooters had been positioned at rooftops around the ground.

The public meeting scheduled for 3pm started late at 8pm. People and activists of the PAT, PML-Q, PTI and Majlis Wahdatul Muslimeen reached Dhobi Ghat in the form of rallies.

Speaking on the occasion, Pervaiz Elahi said the Sharif brothers were against the poor, farmers and labourers of the country. He said Nawaz should have warned his Indian counterpart over the killing of Pakistanis on the Line of Control but he did not utter a single word on the issue.

“Why it is difficult for Nawaz to criticise the Indian premier and Indian Army over the recent skirmishes along the LoC as he has been very vocal against his own army”, asked Pervaiz.

He remarked that a conspiracy for the prosperity of the country and uplift of the poor was hatched in London, adding that the government had been unable to address the problems including unemployment, loadshedding and poverty.