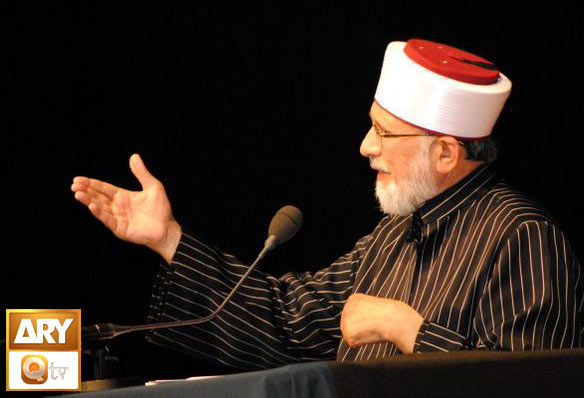 The proceedings of the conference got underway formally with the recitation of the Holy Quran at 10 p.m. followed by Naat Khawani that continued till midnight. Afterwards, Shaykh-ul-Islam Dr Muhammad Tahir-ul-Qadri addressed the conference live from UK through video conferencing which was telecast live on QTV and internet around the world. Thus hundreds of thousands of people participated in the blessed event both directly and indirectly and listened to the scholarly discourse by a leading authority on Islam.

Shaykh-ul-Islam Dr Muhammad Tahir-ul-Qadri recited the first verse of Sura al-Kawthar as the subject of his speech. Interpreting this verse, he said that the word ‘Kawthar’ has a number of implications. It means river or canal of paradise, ‘Hoz-e-Kawthar’, the abundance of the miracles of the Holy Prophet (SAW) and his vast knowledge and gnosis. ‘Kawthar’ also connotes abundance of good. It may also refer to infinite abundance in good viz. all the blessings, attributes, bliss, bounty, superiority, which Allah Almighty bestowed on the Holy Prophet (SAW). Shaykh-ul-Islam described the details of implications of the word ‘Kawthar’ in a lucid and scholarly manner. He also stated that ‘Kawthar’ implies all those attributes and qualities conferred on the previous Prophets individually and then collected in the person of the Holy Prophet (SAW) in abundance. Therefore, none of the creatures can be like him.

Shaykh-ul-Islam said that thousands of examples can be found in ‘Siha Sitta’ and all books on Hadith and Seera. The Hadith and Traditions based on the narration of beauty of the Holy Prophet (SAW) have been narrated by the distinguished Companions and Mothers of Believers such as Hazrat Anas Bin Malik, Ibne Abe Hala, Jabir Bin Samra, Abdullah Bin Abbas, Hazrat Ayesha Siddiqa (RA), and Hazrat Ali (RA). These Companions were specialists in describing the physical attributes of the Holy Prophet (SAW). All of these revered people have mentioned every physical attribute of the Prophet of Allah (SAW). It means that no person more beautiful than the Holy Prophet (SAW) has been born in the world.

Hazrat Ali (RA) states in one of the Traditions that whoever would see the Holy Prophet (SAW) suddenly would be wonder-struck and whoever would join his blessed company would become his lover.

The body of the Holy Prophet (SAW) was fragrant and his perspiration smelt sweet. The skin of his blessed body was very soft and the touch of his skin was also very fine.

Dr Muhammad Tahir-ul-Qadri regretted that people today have given up the description of physical beauty of the Holy Prophet (SAW) and research on it and are getting deviated from the right path in the process. He said that likewise, the language of the Holy Prophet (SAW) was both comprehensive and eloquent. Though his mother tongue was Arabic but he knew every language. He would speak in the language of Quraish, and Hajjaj. When the tribes of Najd came to see him, he talked in their language. Hamdani, Yemeni and any other tribes from any part of the world, who came to meet the Holy Prophet (SAW), he would always talk in their language.

The keynote speech of Shaykh-ul-Islam concluded on 2.30 a.m. The Conference ended following sending of greetings and salutations on the Holy Prophet (SAW).