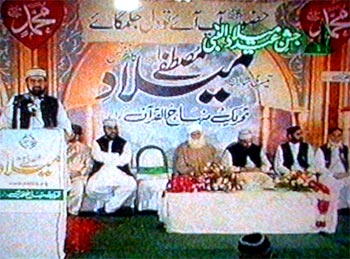 The programme was telecast live on QTV throughout the world. Its proceedings started with recitation from the Holy Quran. Naat was presented afterwards. The fool-proof security arrangements were in place. By 10 p.m., the hall of the mosque was jam-packed and those who came afterwards were seated in a venue adjacent to the Mosque.

Speaking at the occasion, Nazim-e-Ala Dr Raheeq Ahmad Abbasi said that Allah Almighty elevated the status of the Holy Prophet (saw) and no one can blaspheme against the revered Prophet (saw). Doing so will mean spitting on the moon. Minhaj-ul-Quran International has conveyed this crystal-clear message to the world through attributing the Conference to the safeguarding of the status and sanctity of the Prophethood. He said the more efforts would be made against the Prophethood, the more resolute would be our resolve to protect and safeguard it at any cost. MQI has already asked the world leaders to make laws against blasphemy, otherwise, the much-dreaded 'Clash of Civilizations' would become a reality. He said we have told the world through conduct of International Milad Conference that no effort will be spared to protect the sanctity of the Holy Prophet (saw) even at the cost of our lives. We would not allow and bear any such act. MQI will continue to make strenuous efforts for this purpose as it is part of our faith. 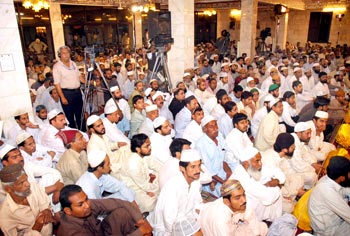 The speech of Sahibzada Hussain Mohi-ud-Din started at 12:10 a.m. speaking with reference to safeguarding the status of the Holy Prophet (saw), he said that the literal meaning of the word 'prophet' is the person who informs. According to Qazi Ayaz (ra), by prophet is meant names of personalities and information but it is applicable only to the unseen viz. information arising out of five senses and logic does not fall in this category. The news or information which a Prophet gets about the unseen becomes 'Anbaa'. 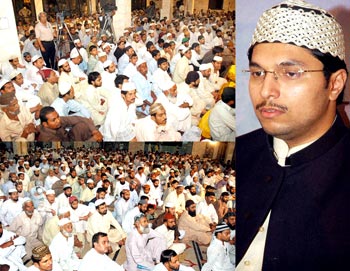 Then the Holy Prophet (saw) asked them that Allah is one and they should only worship Him. So Allah Almighty established a criterion right from the beginning i.e. those who believed in the Prophet's knowledge of the unseen, entered the fold of Islam and those who rejected it joined the ranks of the infidels. It is the special favour of the Holy Prophet (saw) that he educated man about all that he did not know about. He (saw) told humanity about paradise and the way to enter it through performance of righteous and good deeds. He also assured them of his intercession during the Day of Judgment. He taught humanity the meaning of being human. Such are the favours of the Holy Prophet (saw) on mankind that Allah said in the Holy Quran, "If you count the blessings of Allah, You will not be able to count them." He said again in the Holy Quran," Show us the straight path". 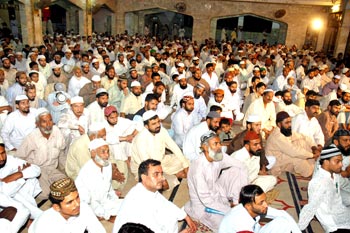 He said the whole of humanity cannot pay back the debt of the Holy Prophet (saw) but definitely it can have a realization of this debt, which is possible through celebrations marking the birth anniversary of the Holy Messenger (saw). He further said Allah Almighty blessed us with the great personality in the person of Shaykh-ul-Islam Dr Muhammad Tahir-ul-Qadri, who removed the dust of disbelief and lighted up the candle of love for the Holy Prophet (saw) in our hearts. Appreciating QTV, he said it played its full role in conveying the message of Shaykh-ul-Islam in every household and thus saved the faith of millions of Muslims from getting polluted.

Shaykh-ul-Islam Dr Muhammad Tahir-ul-Qadri started his speech telephonically from Canada at 12:55 a.m. Addressing thousands of participants of the Milad Conference, Shaykh-ul-Islam thanked the Almighty for making us the followers of the Holy Prophet (saw) and enabling us to have our relationship of love, obedience and slavery with him.

He further said "Nabaun" is a root-word of 'nabi' and 'Nubuyyat'. That means the Prophet has the knowledge of the unknown and informs humanity about it. There is another meaning of 'Nabaun' i.e. elevated place. The majority of jurists have described this meaning. According to this, by Prophet is meant a personality of high and elevated stature having no other equal. Whatever a Prophet informed about related to the world of the unknown and whosoever placed his trust in him, he was declared as "believer of the unknown".

The second root-word is 'Naba', which is described in the dictionary of Imam Abu Mansoor Muhammad Bin Ahmad known as "Tahzeeb-ul-Lugha". Imam Abu Mansoor Muhammad Bin Ahmad was born in 282 Hijra and lived for 73 years. His dictionary is considered to be very comprehensive and authentic in the Muslim World. All scholars of dictionary depend upon his book. He uses the word 'Naba' to describe something raised above the ground level. When something is above the ground level, the word 'Nabuwat' is used for it. Thus the meaning of 'Naba' and 'Nabwa' is with reference to one thing being superior or elevated to the other. 'Nabi' is called 'Nabwa' because Allah Almighty has created them superior to the rest of humanity.

The poet, Aws Bin Hujre, who belongs to the age of ignorance, writes in an elegy, "The glory of this person's greatness is such as the mountain, which is surrounded by small pebbles and other stones. Such a mountain is called 'Al-Nabi'." Thus the personality of Prophet is like a high rising mountain around which small stones and pebbles are lying. The personality before whom everyone else surrenders is called Prophet. On the basis of this root-word, Imam Ibne Shumail says that its meaning is being separate from others. Imam Ibne Arabi narrates that two layers of meaning are found in it; one is being unique and distinct from the rest and the other is that the prophet belongs to the human world from the perspective of his birth and genealogy but due to 'Al-Nubwa', he is separated from the other fellow human beings, for no person can stand parallel to him in the human world. Allah Almighty says in the verse no 51 of Sura Al-Shoora:

"It is not fitting for a man that Allah should speak to him except by inspiration, or from behind a veil, or by the sending of a messenger to reveal, with Allah's permission, what Allah wills: for He is Most High, Most Wise."

Allah Almighty has clearly said in this Sura that no man has the power to speak to Allah. Allah does speak to man but not to every man. Whenever Allah wants to talk to someone, He calls him to Himself. Thus Allah sends someone among the humanity. Then Allah said that He speaks to the humanity through three ways: first through inspiration or revelation, second from behind the veil as He spoke to Hazrat Musa (ra) and third by sending his revelation through an angel. The incident of 'Ascension' is also one such manner of speaking to the Messenger when eyes were seeing everything. Thus Allah Almighty elevated him up high and created uniqueness in this way.

He said that in this day and age marked by mischief and disbelief, Minhaj-ul-Quran International is spreading the message of the prophethood. Today, both moral and religious values stand degraded, MQI is performing its obligation to save faith of people. He also appreciated the role played by QTV in taking this message to every family and house. He also said Minhaj-ul-Quran International is committed to safeguarding the status and sanctity of the prophethood at every cost because it considers this to be essential part of the faith.

The programme ended on prayers.